Officers buy bike for teen who walked hours to work 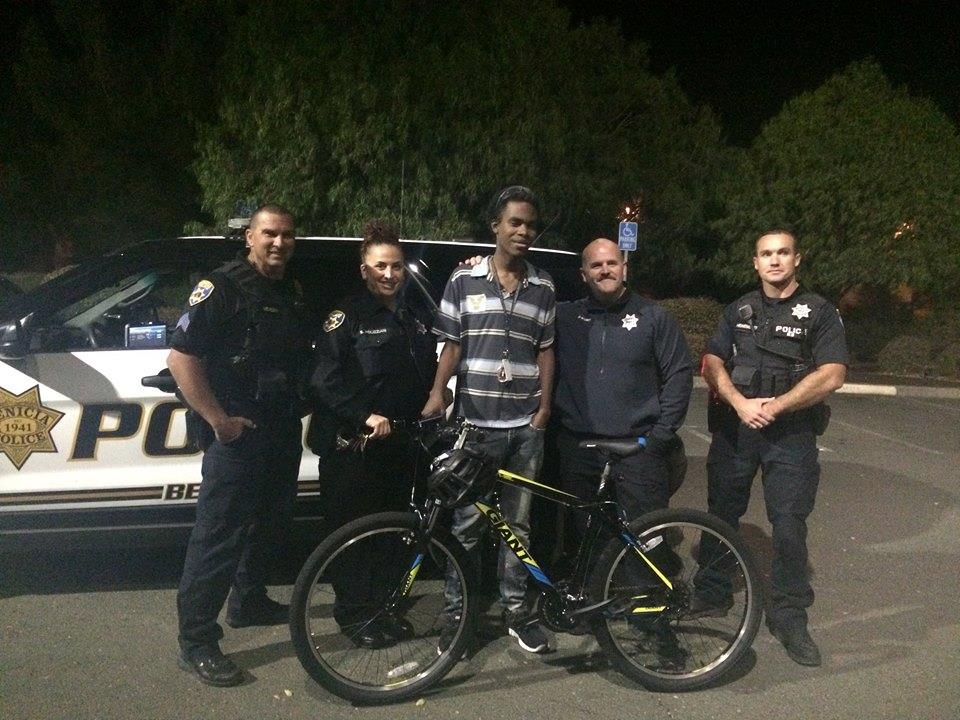 Jourdan Duncan, 18, works the graveyard shift packing boxes at a nutritional supplement company in the northern California city of Benicia.

It’s an easy commute, just 7 miles from his parents’ home. But for Duncan it became a laborious exercise: two hours each way on foot.

“My car broke down, so I figured I had no other way to work,” he said. “I didn’t want to burden others by asking for a ride.”

The sight of a teenager walking the small town’s streets would usually go unnoticed, but to Benicia Police Cpl. Kirk Keffer, things didn’t look right on the quiet street in the industrial part of town.

“The street that I caught him on is really dark, and there’s no sidewalks. And he was dressed in all black,” said Keffer, a 10-year-veteran of the police department.

Keffer, who was on routine patrol, stopped his car to question the young man.

Duncan explained he worked at the nearby Pro-Form Laboratories and that he was just making his way home.

But when Duncan mentioned where he lived — in the nearby town of Vallejo — the officer was astounded. Plotting the route in his mind, the officer immediately realized it would take a couple of hours to get there and that much of it would be uphill.

On the ride home, Keffer learned that his passenger had just graduated from high school and got an entry-level job at the nutritional lab after meeting one of its executives at church.

But Duncan said his real ambition was to get a college education and become a police officer.

They exchanged phone numbers and when Keffer returned to the department, he told his supervisor the department needed to do something to help the young, ambitious man with an incredible work ethic.

So after a unanimous vote from the police association to allocate funds, Keffer headed to a local bike shop and picked out a $500 mountain bike that “needed to attack the hills.”

Two days later, Keffer and several of his fellow officers surprised Duncan as he got off work.

“I can see him walking out of the warehouse area. And I was thinking I hope he doesn’t think he’s in trouble for any reason,” he recalled.

“We said, ‘Hey, we just want to recognize you for your hard work and dedication. A lot of people your age don’t have that. We just wanted to reward you and help you with your commute back and forth and we hope you will accept this bike on our behalf.'”

“I was just thinking, ‘Is this really for me?'” the teenager recalled.

Since then, Duncan and Keffer have developed a true friendship.

Keffer has taken the teenager on police ridealongs and has started a GoFundMe page to help pay for Duncan’s college education. It’s nearly hit its goal of $10,000.

“Most people use distance and not having a car as an excuse not to find a job. This kid — it wasn’t an obstacle. He just wanted to get to work,” he said.