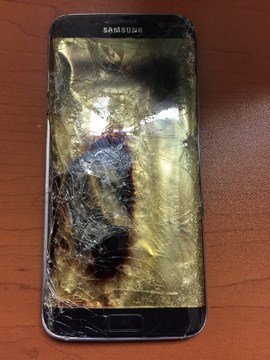 On Thursday morning, a student’s Samsung phone caught fire in class at a high school in Missouri.

The phone was a Galaxy S7 Edge, which has not been recalled by Samsung.

No one in the freshman math class was injured, but the student’s parents were called.

A fan was put in the classroom to clear the smoke and smell. The room was closed off for the remainder of the day, and the class was relocated to the library.

“I think it was a Samsung Galaxy,” said student Cam Holmes. “That mother just blew up. It was just fire; left a stain on the floor. All the hallways were smelly and stinky and stuff.”

As of 1 p.m., the air had cleared and the room will be reopened as needed.

Samsung has faced multiple recalls of phones, including the Samsung Galaxy Note 7, and washing machines this year.

A California man filed a lawsuit in September saying his Galaxy S7 Edge burst into flames in his pocket and badly burned his leg.

Tech expert and CEO of Everhance Ramsey Mohsen recommends all Galaxy users immediately switch to a different phone. “I do believe that the lack of clarity and details Samsung has shared about their devices is reason to be concerned,” said Mohsen. “There isn’t any reason to take a chance regarding your safety for yourself and others.”

Those who sell phones and accessories at SetCell also repair phones.

SetCell owner Tyler Herndon got a fire extinguisher and took KCTV5 outside to demonstrate how a faulty battery can spark.

He says any lithium ion battery can be volatile when it’s overworked.

Things that can cause dangerous damage include:

Getting it wet
Keeping it plugged in and charging for long periods of time
And using a generic charger.
“We see all the time people walk in here with their charger and the charger is fried,” Herndon said. “We really need to start looking at the chargers specifically. We know who’s manufacturing the batteries, but who’s manufacturing these chargers?”

“Samsung stands behind the quality and safety of the Galaxy S7 family. Until Samsung is able to obtain