Grievances about attacks on Muslims were posted on a Facebook page believed to belong to Monday’s assailant at the Ohio State University close to the time of the attack, federal law enforcement officials said.

Investigators are examining Abdul Razak Ali Artan’s Facebook page to determine whether the attack was terrorism, though it will take some time to ascertain the motive.

The attack on Ohio State’s Columbus campus ended in less than two minutes with Artan dead and 11 people injured.

Artan, an Ohio State student of Somali descent, rammed his car into a group of pedestrians Monday morning before exiting the vehicle with a knife and slashing people. Horujko shot the knife-wielding man when he failed to comply with orders to put down his weapon, Ohio State President Dr. Michael V. Drake said in a news conference Monday.

Drake cautioned against a rush to judgment when asked if the incident was terror-related or had anything to do with Ohio’s Somali community — the second-largest in the country.

“We all know when things like this happen that there’s a tendency sometimes for people to put people together and create other kinds of theories. We don’t know anything that would link this to any community. We certainly don’t have any evidence that would say that’s the case,” Drake said.

“What we want to do is really unify together and support each other; do our best to support those who were injured in their recovery, and then allow the investigation to take place.”

What we know about the attacker

Artan was profiled in the school’s student-run newspaper in August in its “Humans of Ohio State” series. He had just transferred from Columbus State and said he was struggling to find a place to pray in peace on the large campus.

“I wanted to pray in the open, but I was scared with everything going on in the media. I’m a Muslim, it’s not what the media portrays me to be. If people look at me, a Muslim praying, I don’t know what they’re going to think, what’s going to happen.

They were in Pakistan after leaving Somalia before coming to the United States two years ago, the US official said.

“He got out of the vehicle and started using a butcher knife to start cutting pedestrians,” Stone said.

Student Jacob Bower, 20, said he saw the attacker outside between the Koffolt Laboratories and Watts Hall.

“He pulled a large knife and started chasing people around, trying to attack them,” Bower told CNN, adding that he did not see anyone get stabbed.

“Luckily there were so many people, he couldn’t focus on one target,” he said.

“He waited ’til everyone was clear, and the stabber clearly wasn’t stopping.”

Throughout the attack, the assailant didn’t yell or say anything, Bower said.

“He was completely silent, which was very creepy. Not even when he was shot (by police),” the student said.

“The cop that subdued the guy with the knife saved so many lives today.”

Drake and others credited the school’s active shooter training and alert system for helping the community maintain order while the scene was secured. Ohio State’s Columbus campus is one of the largest in the United States, with 59,482 registered students attending classes on the sprawling urban campus.

At 9:55 a.m., the school sent out a campus alert reporting an active shooter incident.

While students waited to hear word on the attacker’s movements, some piled chairs against a door to block him from getting in.

“I’m safe in a barricaded room,” Harrison Roth tweeted. “If you’re on campus, get in a room and stay safe.”

About 90 minutes after the first call came in, the lockdown was lifted, Drake said.

Students had just returned to class Monday after the Thanksgiving break — and after the OSU football team’s big win Saturday over the school’s biggest rival, the University of Michigan. 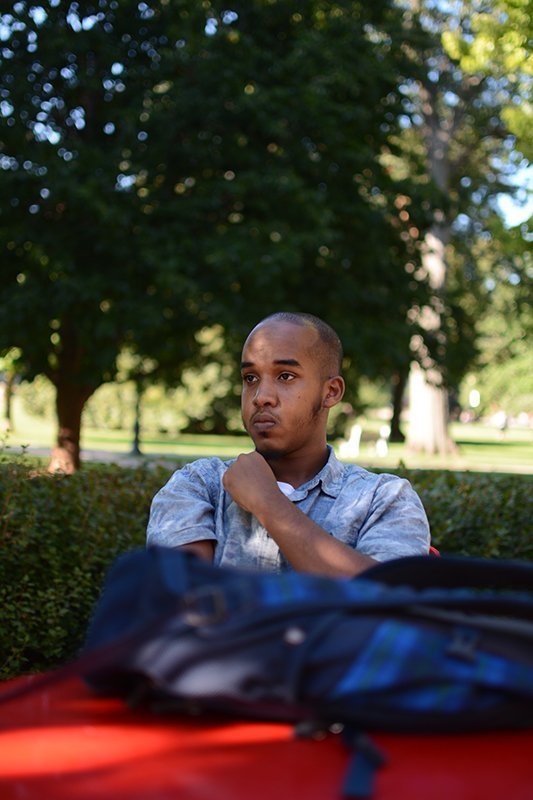