The author addressed the letter “to the children of Satan” and called Muslims “a vile and filthy people.” 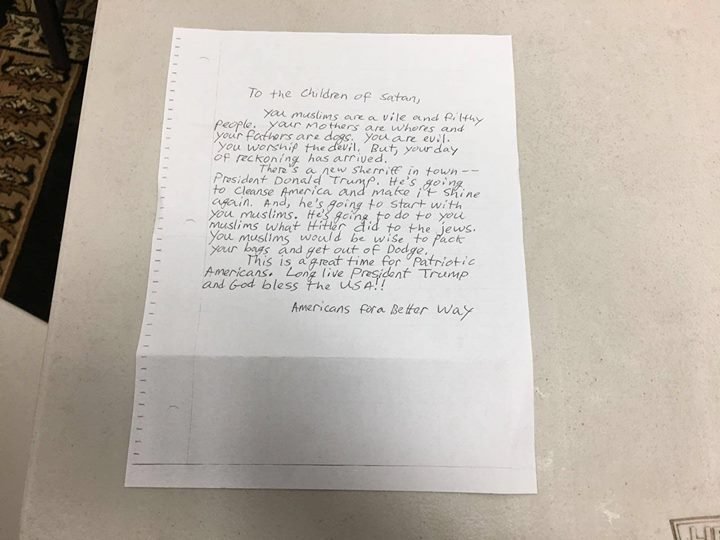 An anonymous group calling itself “Americans for a Better Way” has sent a letter to at least five California mosques, according to the Council for Islamic Relations (CAIR), a Muslim advocacy group. A sixth letter was sent to a mosque in Savannah, according to the group.

“He’s going to do to you Muslims what Hitler did to the jews [sic],” the letter said. “You muslims [sic] would be wise to pack your bags and get out of Dodge.”

Since the election, the Southern Poverty Law Center has documented more than 700 incidents of hateful harassment or intimidation against minorities. According to CAIR, at least 100 anti-Muslim incidents have taken place during that same period.

The Pomona Mosque said on its Facebook page that it received the letter Friday.

In an online statement, the mosque in San Jose confirmed it received a copy of the letter Thursday night.

“We informed the proper authorities and San Jose police have started a formal investigation,” the statement said.

The San Jose Police Department, referring to the letter as a “hate motivated” incident, said in a statement it would conduct a follow-up investigation.

Meanwhile, the Los Angeles Police Department has scheduled a news conference Monday with the FBI and local Muslim community leaders to address the vitriolic letter.