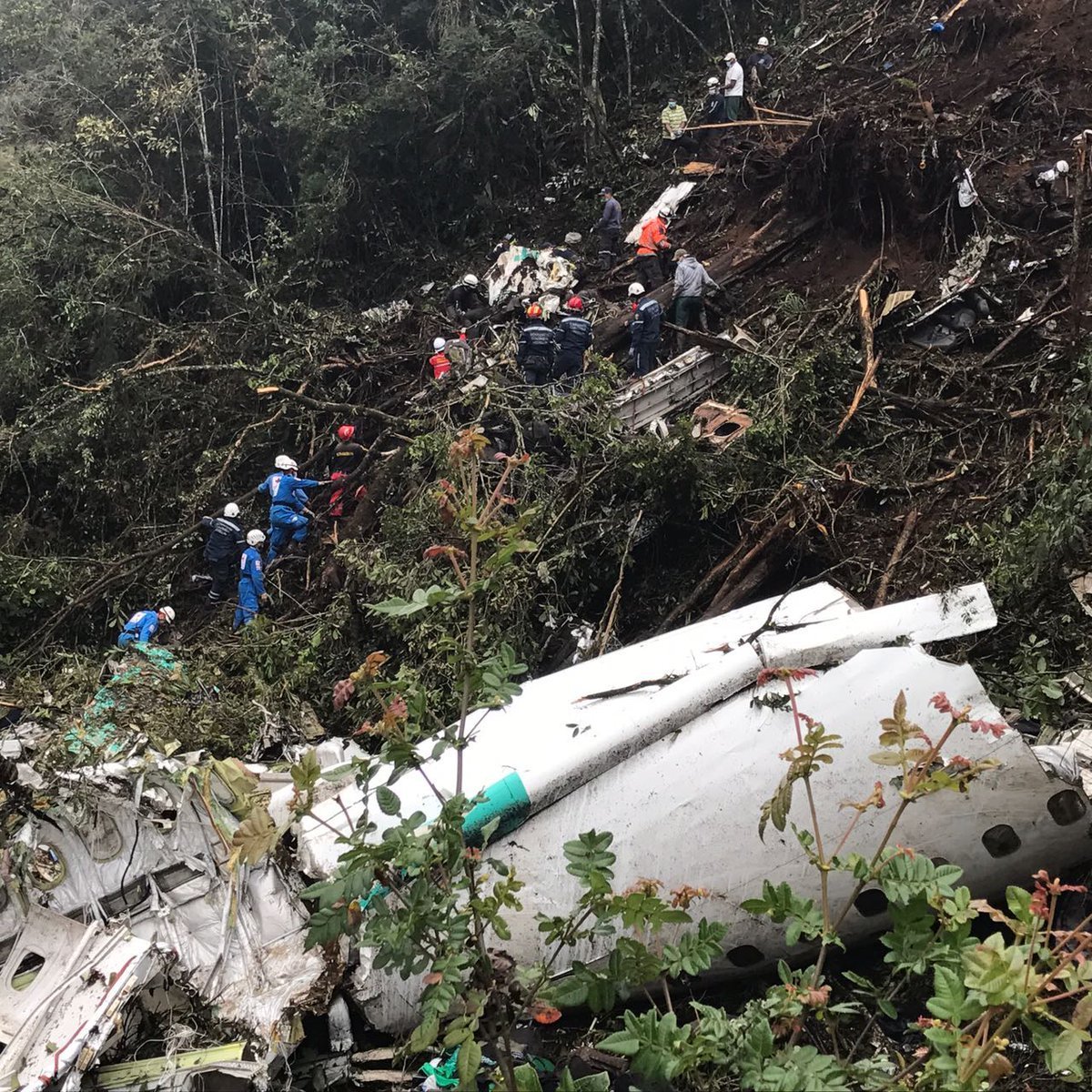 Through thick and thin, the small Brazilian town of Chapeco has stood by its football team.

And on Saturday, even in the most extraordinary of circumstances, the supporters were there for their heroes again.

They had waved them off a week ago for what was going to be the biggest game in the history of Chapecoense football club, hoping for a victory in the Copa Sudamerica final.

But the dream died and the town was shattered in that devastating plane crash on Monday night when 19 players and another 19 club staff were killed.

They wouldn’t be returning with a trophy, they’d be coming home in coffins.

At 8 AM, while the bodies of their beloved stars were still being flown back from Colombia, the fans were waiting at the stadium, chanting, cheering and clapping in the pouring rain.

But the seemingly festive atmosphere was deceptive, many of the supporters were openly weeping. Some were praying.

Enilson Dos Santos told us “I have been here for all the games, so now I want to say goodbye. I am shocked and I’m just so sad.”

Another supporter Sandra Gonzalez wiped away the tears as she said “I’m feeling lots of emotion. They were our idols, I can’t understand what’s happened. I only feel pain.”

Images of the military transport planes touching down at the local airport were beamed onto the large screens within the stadium, the removal of each casket drawing a dignified round of applause.

The arrival of the bodies at the stadium a short time later was greeted by a deafening roar, but then the reality hit home. No longer could anyone be in denial as the coffins were unloaded.

It was a visceral sight, the sheer volume – dozens and dozens – illustrating the magnitude of the disaster.

For a small club of modest means, It had been a monumental effort bringing their heroes home and the last few yards seemed to be hardest.

The rain was now torrential, the field waterlogged, and with 8 soldiers carrying each casket, they waded through a guard of honor to deliver these loved ones to their families.

I cannot imagine what kind of emotions they must have been experiencing.

The wife of Danilo, the goalkeeper whose last-gasp save took Chapecoense to the final, cried as she placed his photograph in the goalmouth. The Godfather to her son pounded the crossbar with Danilo’s gloves.

For Amanda Machado, the grief must have been almost crippling. She had been due to marry her fiancée Dener Braz the previous day. He wanted to take his wedding ring to Colombia with him but Amanda wanted to keep it safe, it now hangs around her neck.

Three players survived the crash but all are too sick to have traveled home so soon.

Eleven players were at the ceremony though, they were disappointed to be missing out on the game of their lives, but they turned out to be the lucky ones.

The defender Demerson was among them, wearing the shirt of his best friend Bruno Rangel, he told me that he’s heartbroken he’s gone.

The emotion was raw inside the stadium and even for observers with no direct connection to the tragedy it was hard not to be moved. For many reporters though, the emotion was real, many of their of their close colleagues, traveling to report the match, died on the plane.

Many were friends. Grief counsellors were on hand to offer comfort where needed.

It truly was an extraordinary end to the most awful week.

The agony continues though; in the coming days, dozens of funerals will be held across Brazil – a country in mourning. And soon, Chapecoense will commence the the difficult task of rebuilding a shattered club.

For much of the day in Chapeco, the rain poured down from the sky. Most of the rudimentary stadium is uncovered and so almost everybody both inside and outside the ground was soaked.

But nobody was complaining, everybody knows that Chapecoense always played best in the rain.