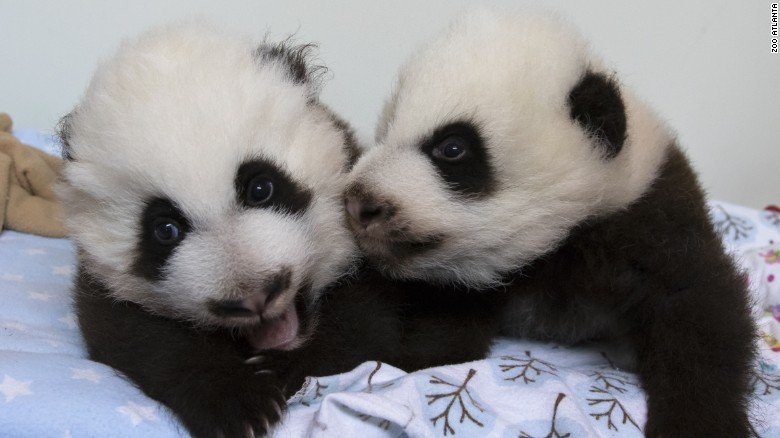 Zoo Atlanta’s roly poly black-and-white furballs of cuteness, formerly known as Cub A and Cub B, have new names.

A naming ceremony on Monday revealed that the giant panda cubs will go by the monikers Ya Lun and Xi Lun. Together, the names mean “Lun Lun’s elegant and happy daughters.”

The pair are the sixth and seventh offspring of mom Lun Lun and dad Yang Yang.

The ceremony marked 100 days since the birth of their second set of twins. The 100-day naming celebration is a Chinese tradition that the zoo also followed with the cubs’ five older brothers and sisters.

Naming babies after they’ve survived a fragile period of infancy is considered a harbinger of a successful future.

“This is a celebration we share with the City of Atlanta, our longtime partners at the Chengdu Research Base of Giant Panda Breeding in China, and with our Zoo Atlanta family, which includes friends and fans from around the world. As we wish Ya Lun and Xi Lun well today, we celebrate the future of their species together,” King said.

The names were selected by public vote from seven pairs of names provided by the zoo’s panda conservation partners in Chengdu, China.

The twins, who are still learning to walk, weren’t present to receive their names. They’re expected to make their public zoo debut later this month or in January.

In the meantime, panda lovers can catch them snoozing, nursing, playing with mom Lun Lun and slipping and sliding as they attempt to get their footing on the PandaCam.

It’s estimated that fewer than 1,900 giant pandas remain in the wild in China’s Sichuan, Shaanxi and Gansu provinces. Giant pandas account for Zoo Atlanta’s most significant financial investment in conservation.