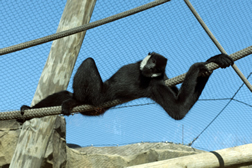 In Hampton Roads you can see monkeys and orangutans up close and personal!

The Virginia Zoo in Norfolk has two white-cheeked gibbons, Dexter, a male, and Asia, a female.

They also have a gang of squirrel monkeys who live in big groups and are from forest areas and usually around rivers and streams.

The siamang is the largest member of the gibbon family and they have four long fingers with a smaller opposable thumb. The zoo has four siamangs.

Finally, the largest of the group. The zoo has four orangutans, Schnitz, Pepper, Dara, and Solaris. Male orangutans can weigh as much as 300 pounds and can stand up to five feet tall!