VIRGINIA BEACH, Va. - The crackling sound of a fire woke a family of two early Christmas morning in Virginia Beach. The fire would eventually consume everything they owned at a home in the 2600 block of Shore Drive around 2:30 a.m.

"I mean the guy had no shoes on; he had some shorts," said Alexander Wayne, who helped the couple out of the home. "They female, she just scrambled to put a robe on, probably just moments before she just came out the door. It was really horrifying."

Wayne also helped the family save their most precious items: their family pets.

"There was one dog that they couldn't find. I believe it got out later, and [the homeowner] actually broke one of the windows [to get the dog out], and actually got 55 stitches in his arm, later that night, so I've heard," said Wayne.

Firefighters say a cat died in the fire, but the family and neighbors have not lost hope, posting numerous signs in the area looking for a white cat last seen Christmas morning.

Waynes says a space heater caused the fire, and sent the family running  only a few hours before sunrise.

Inspired by the horrific tragedy next door, Wayne and other residents have put together a GoFundMe page for their neighbors who have lost everything.  (You can find that link by clicking here.)

"For anybody that is wanting to help or just sees this, just take a moment and just really imagine: could walk away leaving everything inside that day, or just a moment's notice? Are you really capable of that? Because this family had no choice," said Wayne.

Both residents were treated and taken to the hospital with non-life threatening injuries.

Shore Drive was closed for a few hours as crews put out hot spots, but it has since reopened. 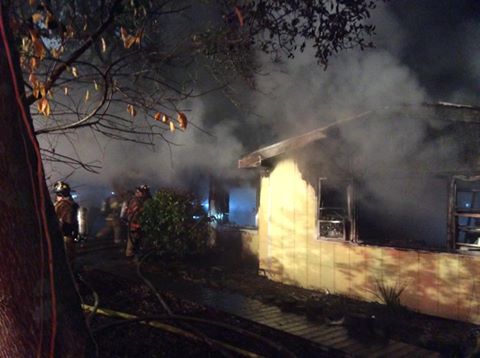