HANOVER COUNTY, Va. -- David Connelly and Nathan Hypes were simply driving north on I-95 Friday morning when they witnessed a crash right before their eyes.

State Police said a Toyota Corolla was driving recklessly along the interstate when it hit another car causing it to spin. That car then hit a Hyundai Santa Fe.

"This one happened to be right there and catch it and it was rolling on its side and went up on the side," said Hypes.

The car went down an embankment and crashed into the Little River.

Connelly and Hypes knew they had to do something and immediately pulled over and went down to help the couple trapped inside the SUV.

"They were submerged to their heads, to their necks, still sitting in the vehicle. The door was damaged and would not open, and I had to pry it open and I was able to pull them free," said Connelly.

He said the water was extremely cold when he jumped in, taking his breath away.

"They were very scared, very panicky," Connelly said. "I just tried to calm them down; I told them I was here to save them."

Hanover Fire and EMS also assisted in getting the couple to safety.

"Crews got there quickly, we had a really good response time," Hanover County Fire Battalion Chief Jason Williams said about the morning rescue.

"Today we got really lucky," Williams said. "This is not a very common occurrence."

Sgt. Steve Vick with Virginia State Police said if Connelly and Hypes hadn't been there, the outcome could have been much different.

He and others are thanking the heroes for stepping up to help two complete strangers.

"It was just the first thing that popped into your head when something like that happens, to get somebody and make sure they're alright," said Hypes.

The couple that was rescued was a 62-year-old male and 60-year-old female from Wendell, North Carolina. They were taken to the hospital to be treated for non-life threatening injuries.

The driver of the Toyota Corolla, James A. Riddick, Jr., 25 of Suffolk, was charged with Reckless Driving, according to Sgt. Vick. 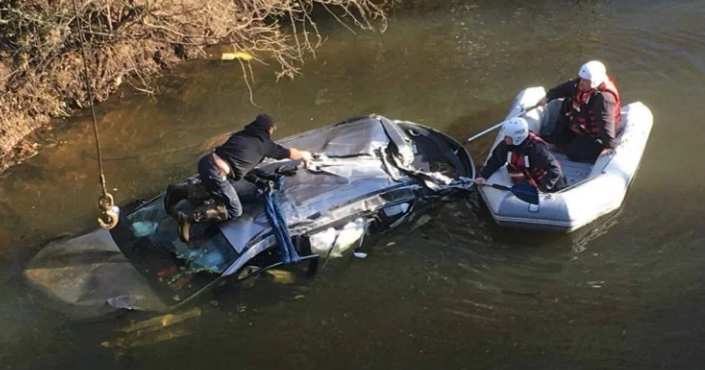