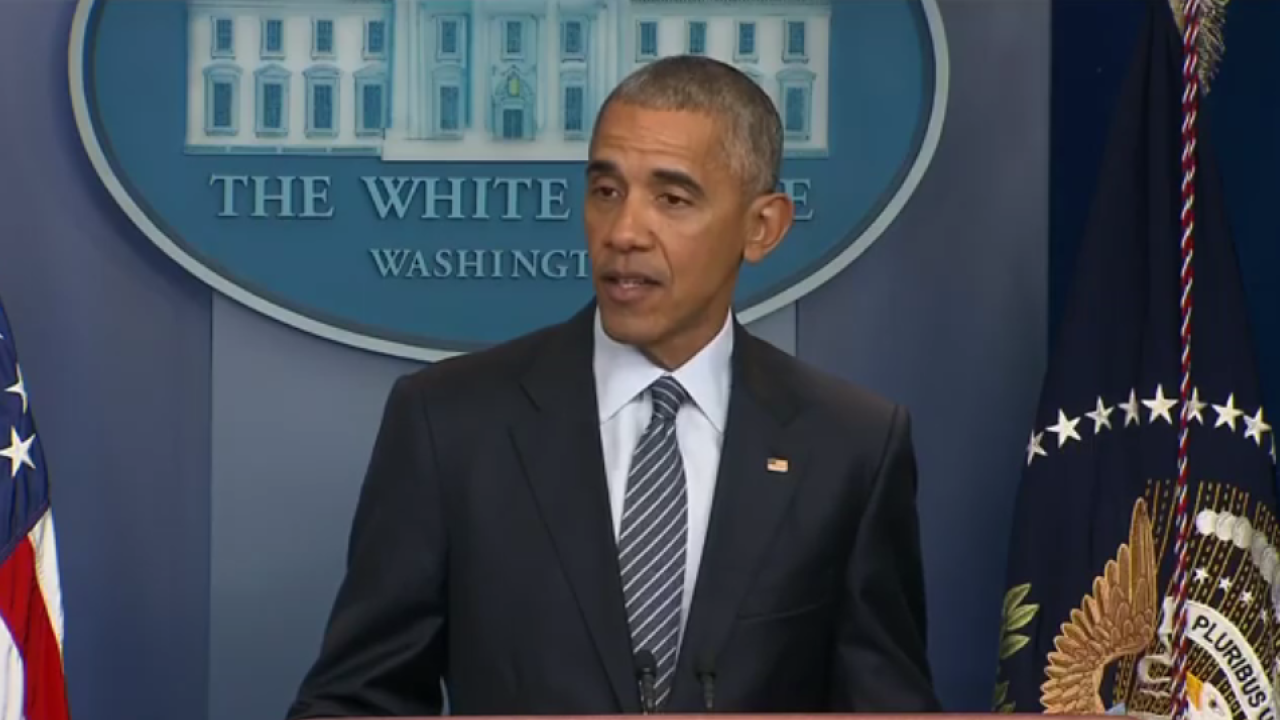 The administration described Russia’s involvement as “Significant Malicious Cyber-Enabled Activities” and sanctioned four Russian individuals and five Russian entities for what it said was election interference. The administration also ordered 35 Russian diplomats to leave the country and two Russian compounds are being closed.

This is the first time the names of Russian officials involved in the hacking have become public on the sanctions list.

“Russia’s cyberactivities were intended to influence the election, erode faith in US democratic institutions, sow doubt about the integrity of our electoral process, and undermine confidence in the institutions of the US government,” a White House statement said. “These actions are unacceptable and will not be tolerated.”

According to statements from the White House and the Treasury Department, the government has sanctioned nine entities and individuals over their alleged interference in the election: the GRU and the FSB, which are two Russian intelligence services; four individual officers of the GRU; and three companies that provided material support to the GRU’s operations.

The US also separately sanctioned two Russian individuals, Evgeniy Mikhailovich Bogachev and Alexey Belan, for using cyber-enabled means to allegedly cause misappropriation of funds and personal identifying information. They’ve long been sought by the FBI.

Obama also said in the statement announcing that the diplomats have been ordered to leave the country and that those individuals and their families were given 72 hours to leave the United States.

“These actions follow repeated private and public warnings that we have issued to the Russian government, and are a necessary and appropriate response to efforts to harm US interests in violation of established international norms of behavior,” Obama said in the statement.

Russia swiftly responded to the actions Thursday. Russia will respond to any “hostile steps” that the US may take in response to allegations of hacking during the 2016 election, according to the official representative for the ministry.

Russian Foreign Ministry spokeswoman Maria Zakharova said similar steps will be taken in response to the expulsions, though she did not immediately provide further details. Dmitri Peskov, a spokesman for Russian President Vladimir Putin, told reporters there is “no alternative to reciprocal measures,” adding that Putin is “in no rush to make a decision.”

Russia’s first visible action came later Thursday, when Russian authorities ordered the closure of the Anglo-American School of Moscow, a US official briefed on the matter said. The order from the Russian government closes the school, which serves children of US, British and Canadian embassy personnel, to US and foreign nationals.

The order also closes access to the US embassy vacation house in Serebryany Bor, near Moscow.

President-elect Donald Trump said Wednesday that Americans should “get on with our lives” when he was asked about the expected White House announcement to place sanctions on Russia.

“I think we ought to get on with our lives,” he told reporters Wednesday night at the Mar-a-Lago in West Palm Beach, Florida. “I think that computers have complicated lives very greatly. The whole age of computer has made it where nobody knows exactly what is going on. We have speed, we have a lot of other things, but I’m not sure we have the kind, the security we need.”

A senior Obama administration official acknowledged to reporters Thursday that Trump could reverse the sanctions by executive order, but added, “I don’t think it’d make a lot of sense.”

House Speaker Paul Ryan, a Republican, called the sanctions “overdue,” adding that it is an “appropriate way to end eight years of failed policy with Russia.”

“Russia does not share America’s interests,” he said in a statement Thursday. “In fact, it has consistently sought to undermine them, sowing dangerous instability around the world. While today’s action by the administration is overdue, it is an appropriate way to end eight years of failed policy with Russia. And it serves as a prime example of this administration’s ineffective foreign policy that has left America weaker in the eyes of the world.”

Republican Sens. John McCain and Lindsey Graham, two of Russia’s fiercest critics in the US Senate, called for stronger sanctions against Russia.

“The retaliatory measures announced by the Obama administration today are long overdue. But ultimately, they are a small price for Russia to pay for its brazen attack on American democracy. We intend to lead the effort in the new Congress to impose stronger sanctions on Russia,” the two said in a joint statement.

Director of National Intelligence James Clapper issued a statement on Thursday reiterating the agency’s confidence that the Russian government was involved in the US hacking.

“This activity by Russian intelligence services is part of a decade-long campaign of cyber-enabled operations directed at the US Government and its citizens,” the statement read. “The US Government can confirm that the Russian government, including Russia’s civilian and military intelligence services, conducted many of the activities generally described by a number of these security companies.”

The administration’s announcement comes after months of internal debate over how to respond to Russian hacking that US law enforcement and intelligence agencies have watched take place for over a year.

Those hacks resulted in the public release of thousands of stolen emails, many of which included damaging revelations about the Democratic Party and former Secretary of State Hillary Clinton, the party’s nominee.

The hacking of DNC emails eventually led to the resignation of former chairwoman Debbie Wasserman Schultz after emails showed her favoring Clinton over Vermont Sen. Bernie Sanders during the Democratic primary.

Earlier this month, the CIA announced to a group of senators that the hacks were aimed to help elect Trump as president.

“The actions the President took today are an important step, but preventing Russia from interfering in our elections will require a sustained response from the next administration and from Congress.

We are obligated to conduct a thorough, timely and bipartisan investigation in the 115th Congress with the goal of releasing as much information as possible, while protecting sources and methods, so that the American people can understand exactly what happened and what could well happen again if we fail to respond appropriately.

Make no mistake: Russia’s actions were not those of a friend. I am grateful to the intelligence community for their hard work to warn us about Russia’s efforts to interfere in the democratic process. I will continue to urge the incoming administration to respect the expertise and conclusions reached by our intelligence professionals, and to take actions that treat Russia’s interference with the seriousness it deserves.”