ISIS has claimed responsibility for the deadly New Year’s attack at an upscale Istanbul nightclub which left 39 dead.

As authorities in Turkey continue their search for the attacker, the terror group offered no further clues about the identity of the assailant. The claim — made in a statement posted to Twitter — cannot independently be verified by CNN.

“In continuation of the blessed operations which ISIS carries out against Turkey, a soldier of the brave caliphate attacked one of the most popular nightclubs while Christians were celebrating their holiday,” the statement posted to Twitter reads.

Earlier on Monday, the Kurdistan Worker’s Party, or PKK, distanced itself from the attack, which took place at the Reina nightclub during the early hours of January 1.

“No Kurdish forces have anything to do with this attack,” it said in a statement. “The Kurdish freedom fight is also the fight for democratization of Turkey. That’s why we won’t target innocent and civilian people.”

Dozens of people were hospitalized following the attack. As of Monday, 46 were still being treated, including one American, according to the Istanbul governor’s office. A handful of the injured were in critical condition. 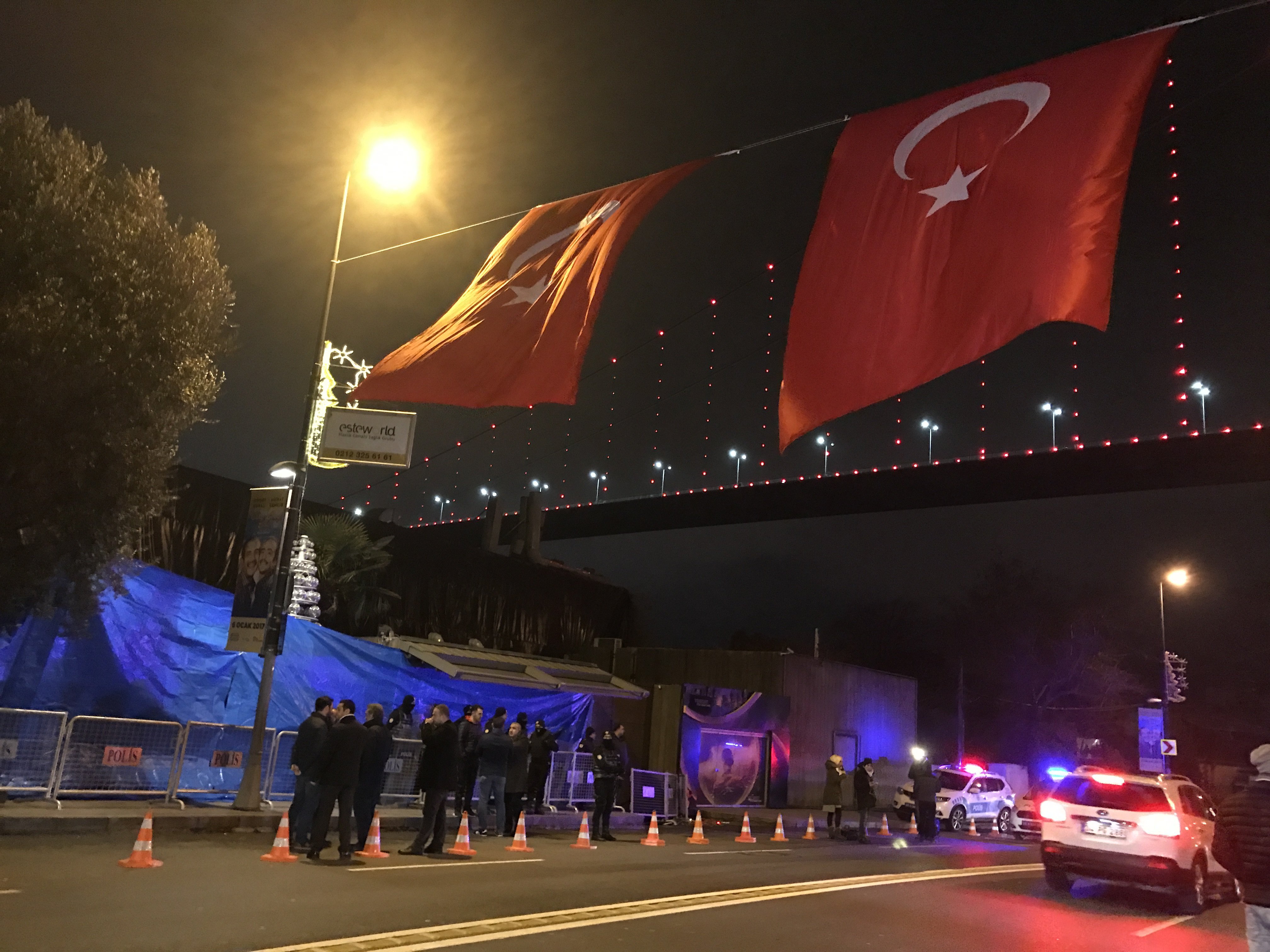 Those killed in the attack hailed from 14 countries, including India, Morocco, Jordan, Canada, Russia, Tunisia, Saudi Arabia and Kuwait.

The suspected shooter, who stormed the nightclub soon after the clock struck midnight, appears to have evaded the tight security that blanketed Turkey’s largest city over the New Year, but authorities were confident they would apprehend him soon.

“There is strong coordination and we will find him, no delay,” Turkish Prime Minister Binali Yildirim told reporters gathered outside an Istanbul hospital, where he had been visiting people injured in the attack.

Footage of the attacker shooting a security guard and police officer at the entrance of the nightclub has emerged, lending credence to Turkish authorities’ claim that he carried out the attack alone.

A security official showed the entrance to CNN, confirming that it was the site of the video.

“We are face to face with a terror attack,” Interior Minister Suleyman Soylu told reporters Sunday morning, adding, “the efforts to locate the terrorist are ongoing. Security forces have begun the necessary operations. God willing soon (the attacker) will be apprehended.”

World leaders condemned the shooting and US officials also called it a terrorist attack, making it the first of 2017.

‘At first we thought it was a fight’

Witnesses who survived the attack explained how what should have been a celebratory evening turned into a bloodbath.

“We were having fun. At first we thought it was a fight, then there was a lot of gunfire,” eyewitness Yunus Turk told CNN.

“After the gunfire everyone started to run toward the terrace. We ran as well. There was someone next to me who was shot and fell on the floor. We ran away and hid under the sofas.”

Another eyewitness said he didn’t know how many attackers there were, but he saw one person and hid.

“These crazy people came in shooting everything.”

On Sunday, the club issued a statement on its Facebook page.

“This terrible incident is a terror attack against our citizens’ peace, brotherhood, serenity, economy, tourism and against our nation,” the statement read.

“Our hearts bleed and the bullets are in our heart,” it added.

ISIS and Kurdish militants both have staged attacks in Turkey, which is still reeling from a bloody and failed military coup in July.

ISIS was suspected to be behind the attack on Ataturk Airport in June that left 44 people dead and an explosion at an August wedding, not far from the border with Syria, that killed at least 54 people.

In December, a pair of bombings in Istanbul killed 44 people and wounded 155 others in an attack by a breakaway group of the PKK. The two explosions occurred after a heavily attended soccer game at Besiktas Vodafone Arena.

Also in December, a car bomb exploded near a public bus, killing 13 soldiers in the central province of Kayseri. Three days later, a gunman assassinated Russia’s ambassador to Turkey at an Ankara art gallery.