CHESAPEAKE, Va. - Police were involved in an active pursuit Thursday afternoon which ended in Isle of Wight.

Police say the pursuit spanned many areas. It went through Portsmouth, Suffolk and ended on Windsor Blvd., in Isle of Wight

The chase happened after police say they witnessed a hit-and-run on I-464 near I-64 around 3:20 p.m.. The initial incident involved a white Lexus and a tractor trailer.

An officer immediately tried to make a traffic stop on the Lexus and the driver refused to comply. When officers ran the tags of the Lexus they came back as stolen.

Officers pursued the vehicle into Portsmouth where the suspect hit a Toyota truck and continued to evade police.

The pursuit then continued onto Route 58 where it caused a vehicle to run off the road inside city of Suffolk which ended in a minor injury.

Police then followed the driver into Isle of Wight where Isle of Wight deputies say they had a unit close to Route 460 when the pursuit arrived there.

The deputy attempted to assist the other authorities already in pursuit. The suspect ended up turning onto Old Mill Road and then stopped.

Virginia State Police then took the driver into custody. The suspect has been identified as 42-year-old Omar Epps.

Epps was previously wanted for five felony fraud related charges and had a revoked operators license.

While Epps was being taking into custody, an Isle of Wight Sheriff's Deputy's weapon accidentally discharged. The front lower bumper of the vehicle being driven by Epps was struck with a single round of gunfire.

The deputy whose weapon discharged was placed on administrative leave pending the outcome of an internal investigation.

Police say there were no injuries or other property damage involved. 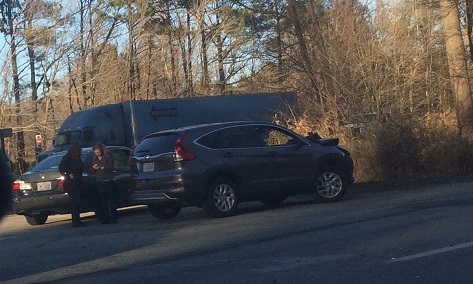