More angry protests against President Donald Trump’s immigration policies are set for Sunday across the country after hundreds of demonstrators converged on airports the day before.

Protests Saturday came amid turmoil caused by the travel ban, issued by Trump on Friday night and barring entry to the US from seven Muslim-majority countries: Iran, Iraq, Syria, Sudan, Libya, Yemen and Somalia. Part of the ban was halted by a judge in a federal court in New York on Saturday.

“I think it’s horrific and terrible and we are basically condemning people to death by not allowing them to come here,” she said.

She said the event appeared to be impromptu. She heard about it on Twitter and thinks most people did the same.

In New York City, a large crowd massed at John F. Kennedy International Airport to protest the detention of two Iraqis who were later released.

“Mr. President, look at us,” said US Rep. Nydia Velazquez, a New York Democrat. “This is America. What you have done is shameful. It’s un-American.”

The protesters gathered in Terminal 4 at JFK and carried signs reading, “We are all immigrants!” and “No ban! No wall!”

Gov. Andrew Cuomo ordered the Port Authority of New York and New Jersey to reverse an earlier decision to restrict passage aboard the JFK Airport AirTrain to ticketed passengers and airport employees only.

He also instructed state police and the Metropolitan Transportation Authority to assist with security and transportation for protesters.

“The people of New York will have their voices heard,” Cuomo said. 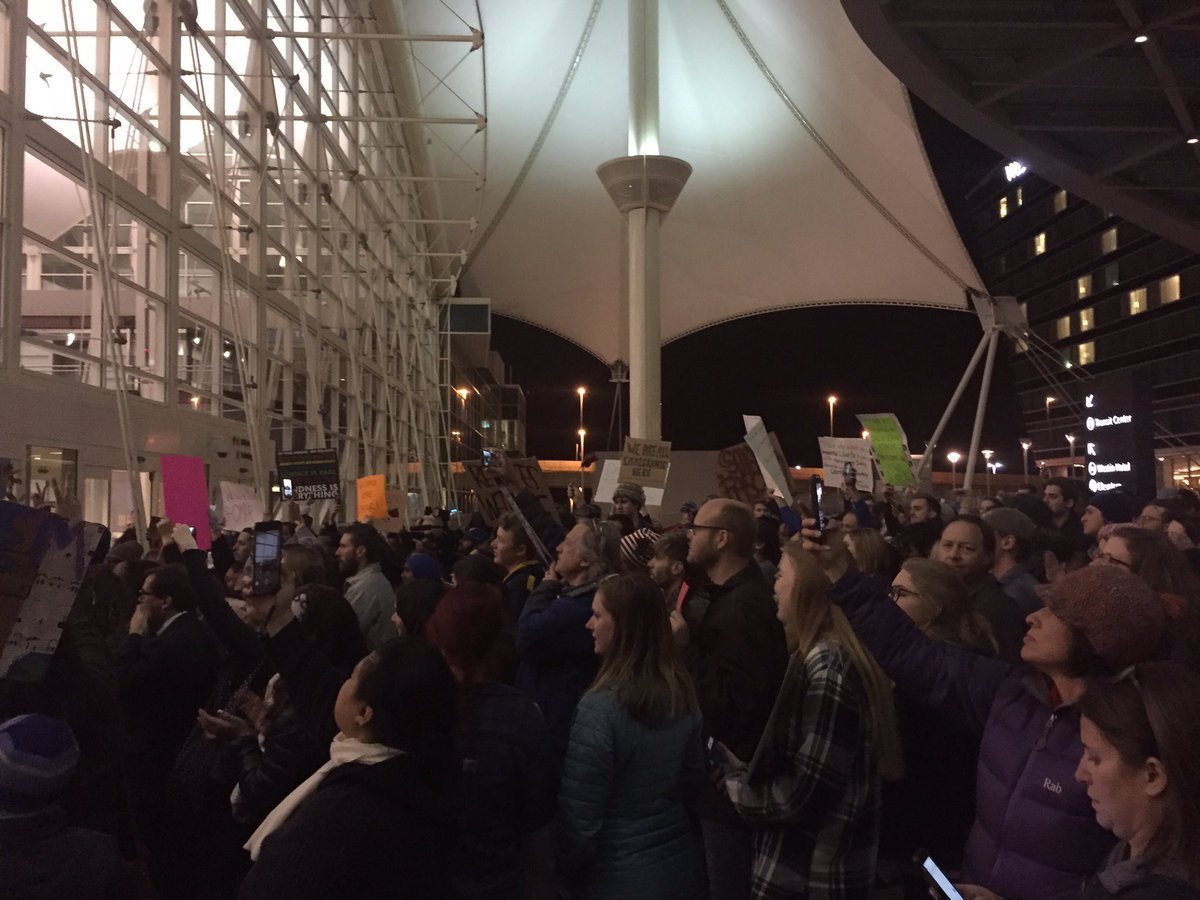 One of the detained Iraqis, Hameed Khalid Darweesh, was released early Saturday afternoon. He worked with the US government for 10 years after the United States invaded Iraq.

The other detained Iraqi, Haider Sameer Abdulkaleq Alshawi, had been granted a visa to join his wife, who worked for a US contractor in Iraq, and son, both of whom already live in the United States as refugees. Alshawi was released later Saturday.

The American Civil Liberties Union argued Saturday evening in a federal court in New York for a nationwide stay that would block the deportation of all people stranded in US airports under what the group called “President Trump’s new Muslim ban.”

A federal judge in New York granted an emergency stay Saturday night for citizens of seven Muslim-majority countries who have already arrived in the US and those who are in transit, and who hold valid visas, ruling they cannot be removed from the US.

That move limited part of President Trump’s executive order barring citizens from those countries from entering the US for the next 90 days.

Rep. Jerrold Nadler, another Democrat from New York, said some 10 other travelers were detained, but their status was unclear Saturday night.

Rep. Hakeem Jeffries, also a Democrat from New York, said Sunday that six more had been released, and seven to 10 remained detained.

“(They) have lawful visas and they have the proper paperwork,” Jeffries said. “We hope they will be released later today.”

“This executive order is antithetical to the values that make America great, and it will make our country less safe,” he said in a statement.

At Seattle-Tacoma International Airport an estimated 2,000 people turned out to protest the President’s immigration policies on Saturday.

The loud protests boiled over inside the terminal blocking the arrival level escalators early Sunday morning, CNN’s Jon Ostrower tweeted from the airport.

Police dispersed parts of the crowd with pepper spray — at least 15 arrests were made, the Seattle Police Department said.

“If you aren’t willing to risk arrest, this may be time for you to leave,” protestors said to one another.

The crowds started to dwindle to a few hundred protesters after midnight as police squeezed people out area by area, Ostrower said.

The airport posted an update for travelers on Twitter early Sunday morning.

“Travelers: ticketing running smoothly. At this time you should expect crowds & groups of protestors at baggage pick up & checkpoints.”

In Portland, one demonstrator carried a sign that said, “Portland coffee comes from Yemen,” one of the seven Muslim-majority nations on the no-travel list.

Lucia Martinez told KATU she used to be a “hashtag activist” but felt compelled to protest at the airport.

“This was the last straw,” she said of Trump’s policies. “We’re all immigrants.”

A group of community activists, attorneys and others gathered at O’Hare International Airport in Chicago.

In Atlanta, all 11 people detained at Hartsfield-Jackson International airport were cleared and released, according to a tweet from Mayor Kasim Reed at 11:30 p.m. Saturday.