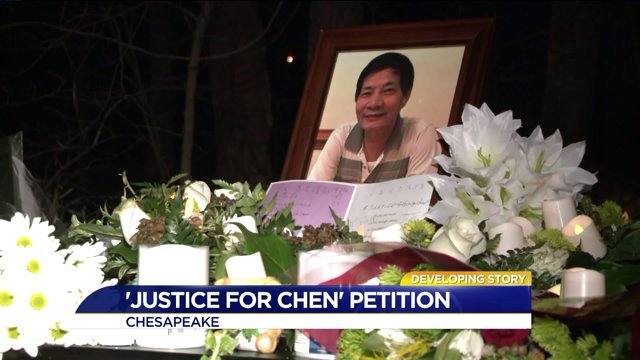 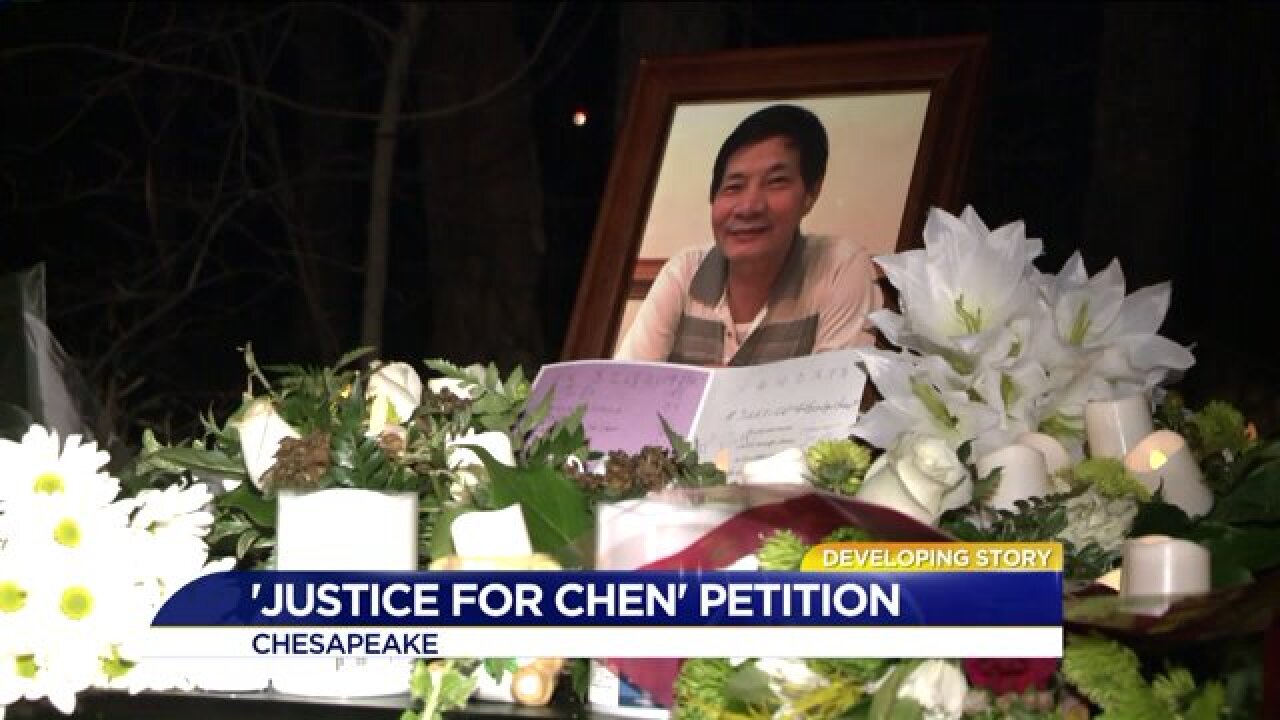 CHESAPEAKE, Va. - Protests, a Facebook page, and now a petition: it is the latest in a string of campaigns all demanding justice in the shooting death of 60-year-old Jiansheng Chen of Chesapeake.

Grandpa Chen – as he has come to be known on the Internet – was allegedly shot and killed by a River Walk neighborhood security guard last month.

The guard says he was acting in self-defense, and that Chen tried to run him over. Chen’s family says their grandfather was playing Pokémon Go, and spoke little English.

“A 60-year-old man who was sitting in the car playing Pokemon can get shot five times. Is that crazy?” said Harry Zhang, a local professor and president of Eastern Virginia chapter of the Organization of Chinese Americans. “If I walk a dog at night, will I get shot? If I go jogging with my wife, will I get shot?”

Zhang says he was so concerned about the lack of action from police, he decided to start a petition. On Monday, he presented over 4,500 signatures to the Chesapeake Commonwealth’s Attorney’s Office.

“Our petition is very simple. We just want to bring the justice to Mr. Chen, and we want the Commonwealth Attorney to [bring down] the highest criminal charge possible, permitted by the law.”

Zhang says he has gathered even more signatures since he submitted the petition.

News 3 obtained a copy of the document which also asks for a “town hall meeting” and invites the Chesapeake Police Department to work on a “protocol in dealing with situations where there are language barriers.”

“These kind of tragedies apply to everybody in town,” said Zhang. “We want to know what is happening.”

In a statement to News 3, the attorney for the security guard company, Andrew Sacks, said:

“I understand and appreciate the fact that people would be sympathetic to a member of their community. It is not the ethnicity of the person at issue, but the conduct of the person at issue. Everything points to this being an unfortunate but necessary use of force to prevent the security guard from being run over and killed, or seriously injured.”

Officials with Chesapeake police confirmed two residents also met with the Chief of Police on Monday regarding Chen’s death, but they were only told that the case remains under investigation.

In a statement to News 3, the attorney for the Chen family, James Broccoletti, said:

“The Chen family certainly appreciates the love and support they are receiving form the Chinese community in their time of need and in their search for justice. We also look forward to working with the Chesapeake Police Department and the Commonwealth’s Attorney’s Office in that search for justice for Mr. Chen.”

In addition to the petition signatures, 101 organizations also signed a letter demanding answers. This letter was sent to the Chesapeake Commonwealth’s Attorney, the Chief of Police, the mayor, the Virginia General Assembly, Virginia’s Attorney General, and to Governor Terry McAuliffe.