CHESAPEAKE, Va. - Crammed in like sardines, with three to four middle school students to a seat.

“I couldn’t find a seat for, like five minutes,” said 13-year-old Javier Razo. “I was barely on the seat. People beside me were the same way.”

Javier is an eighth grader at Oscar Smith Middle School, and this is how he described his bus ride home Wednesday afternoon.

Javier says when he saw students standing in the back of the bus, he knew something was wrong.

Susan Razo claims her 13-year-old son Javier has been picked up overcrowded or tardy school buses several times in Chesapeake.

“There are bumps, so I felt like I could fall and hurt somebody, or myself,” Javier told News 3’s Merris Badcock the day after his ‘packed in’ school bus ride.

According to Javier’s mother, Susan, the school bus problems started before the day began when Javier's bus showed up late that morning.

“He’s my son and I do not want him in the cold for 45 minutes waiting for a bus that never came,” said Razo.

Susan says the school never called to let her know the bus was running late. Javier says he waited 45 minutes before finally giving up, because his "fingers were turning blue."

Later that afternoon, Susan called the transportation department about the late bus. She says she was told another bus was eventually sent, but officials could not say when the bus arrived.

“My mom was going to have to pay for me to go to [school],” said Javier. “She can’t drive me…I do not want her to spend her money.”

News 3 investigated and discovered Chesapeake Public Schools have the lowest paying salaries for bus drivers in the seven cities, according to data provided by all the public schools systems.

(Click here to see how much your school bus drivers are getting paid.)

Recently, some parents have complained of bus driver shortages, and now Susan says it is time to solve the problem.

“I understand they have transportation issues, that there are not enough drivers,” she said, “but that is not my problem. My problem is my son. I care about his safety, and sitting three to a seat, four to a seat is not safe for my son.”

We have spoken with officials from Chesapeake Public Schools but due to the timing of our request, they were unable to meet our deadline. 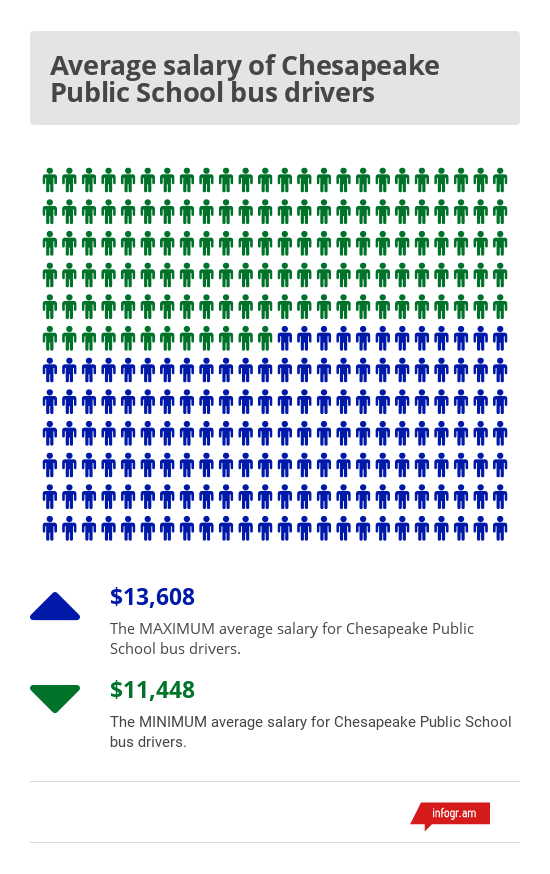