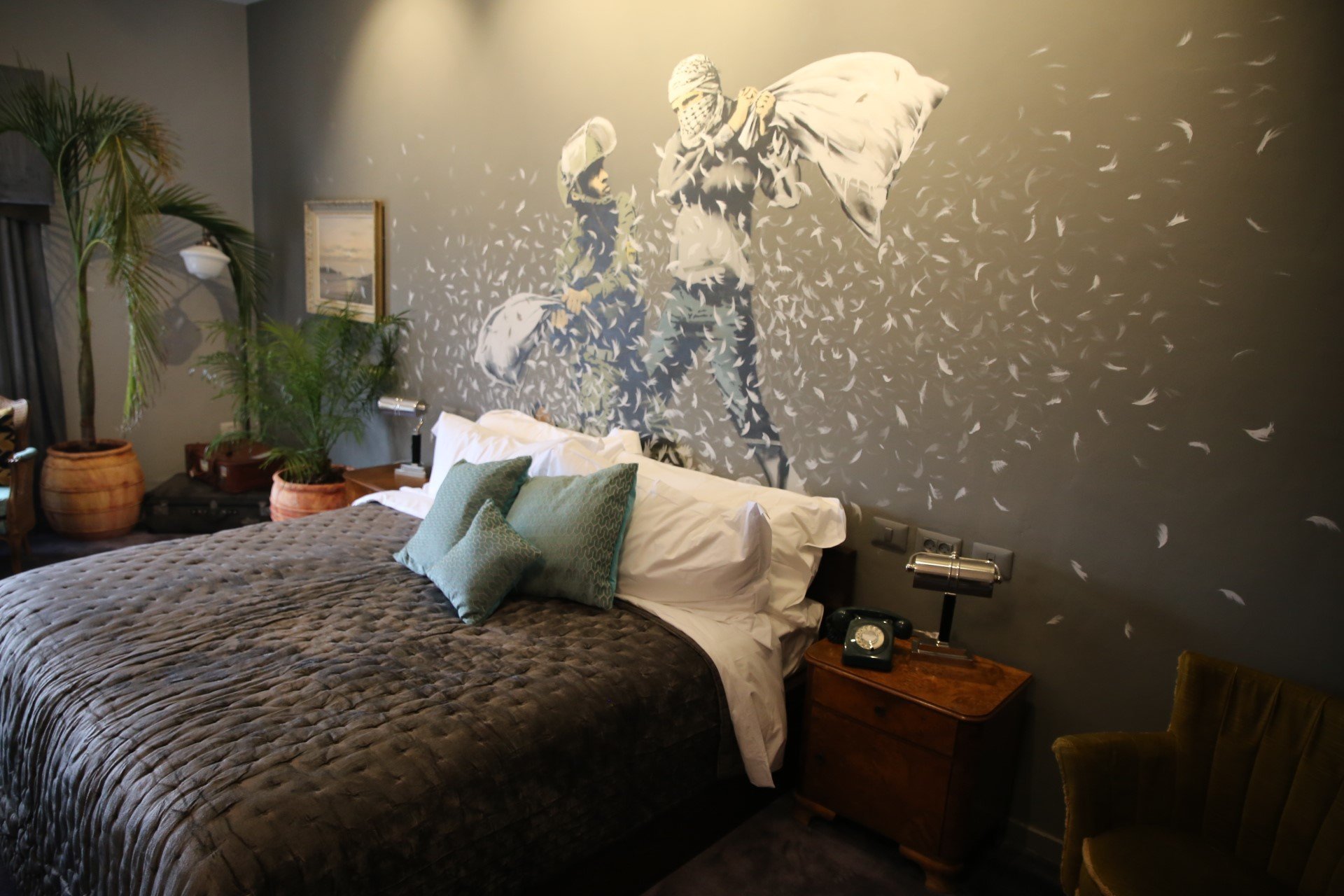 It bills itself as the hotel with the worst view in the world. And it doesn’t disappoint.

Nearly every window from the Walled Off Hotel opens up to a 30-foot wall of concrete. It is the first ever hotel designed and financed by Banksy, the world-famous, but anonymous, graffiti artist.

His mark — already visible on the concrete wall outside the entrance of the hotel — is even more evident in the 9 guest rooms and presidential suite.

Construction and preparation of the Walled Off Hotel began 14 months ago. Banksy did most of the artwork himself, from the cherubs on life support hanging above the player piano to the Israeli soldier pillow fighting with the masked Palestinian above one of the beds.

Two rooms were set aside for other artists, who were kept almost entirely in the dark until the hotel was nearly complete.

“It’s been pretty mental to be honest. It’s been a crazy journey just (being) locked in here,” laughed Dominique Petrin, a Montreal-based artist who was invited to do one of the rooms.

She has spent the last month locked in her room, not allowed to see the rest of the hotel. Her room is the most conservatively decorated… to a point.

“I made this room like a nice, lushy, colonial room,” said Petrin, “but when you look at some details, you see something is really going wrong. You know when things are going so good, but at the same time it’s apart?”

Each room has its own unique style. One room is painted to look like the guest is surrounded by concrete walls, and yet somehow, the room still manages to feel comfortable.

Another room feels like an army barracks — furnished with bunk beds with foot lockers.

The presidential suite, complete with its own mini-theater, study, and bar, also has a luxurious jacuzzi. But the water for the jacuzzi comes from what appears to be a water tank speckled with bullet holes.

Instead of a gym, the hotel has a museum. The exhibition is dedicated to enlightening visitors about the separation barrier and providing context, while being painstakingly careful not to pick a side in the Israeli-Palestinian conflict that surrounds the hotel.

“It’s meant to be a space that’s both empowering and informing for people,” said Gavin Grindon, the museum’s co-curator.

At the entrance to the museum sits a lifelike figure of former British Foreign Secretary Lord Arthur Balfour, whose Balfour Declaration of 1917 expressed the UK’s support for establishing a “national home for the Jewish people” in British-mandate Palestine.

One hundred years later, Balfour is still one of the most controversial figures in the conflict — thanked by Israelis, detested by Palestinians.

“It’s exactly one hundred years since Britain took control of Palestine and started re-arranging the furniture – with chaotic results,” said Banksy in a press release handed out at the hotel’s opening.

“I don’t know why, but it felt like a good time to reflect on what happens when the United Kingdom makes a huge political decision without fully comprehending the consequences,” the statement read, referencing in one line Balfour and Brexit.

The hotel sits in Area C, a portion of the West Bank under Israeli control. That means both Israelis and Palestinians are allowed to visit.

A few steps away is Area A, where Israelis are forbidden, while many Palestinians face major restrictions in Israel. The Walled Off Hotel is intended as a place of meeting — a safe space for discussion.

The hotel itself, in its art and its literature, refuses to take one side while acknowledging both.

The wall “divides the nation of Palestine from the state of Israel and restricts movement between the two for citizens of both sides,” the hotel’s website reads.

“Depending on who you talk to its either a vital security measure or an instrument of apartheid.

“Its route is highly controversial and it has a dramatic impact on the daily lives of a lot of people. The one thing beyond dispute is that everything here is under dispute.”

The wall, mere steps from the hotel’s front door, has been described as the biggest canvas in the world.

Political graffiti, art, and different messages adorn nearly the entire length of the wall as it cuts between Jerusalem and Bethlehem. Banksy painted nine pictures on and near the wall a decade ago.

An art supply store is connected to the hotel in case guests want to add their own message to the separation barrier.

“Walls are hot right now, but I was into them long before Trump made it cool,” Banksy said in his statement.