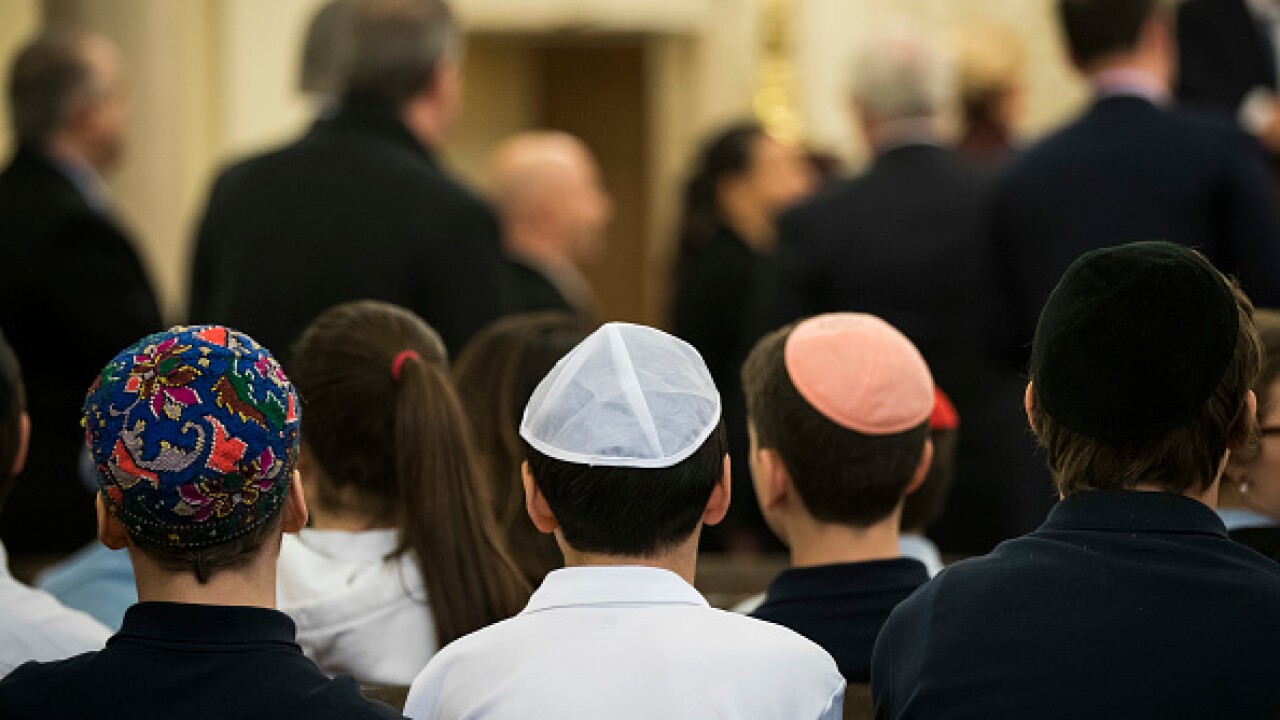 NEW YORK, NY – MARCH 3: Students from a local Jewish school take their seats to listen to U.S. Rep. Carolyn Maloney (D-NY) speak about the rise in hate crimes against the Jewish and Muslim communities at the Park East Synagogue, March 3, 2017 in New York City. Earlier on Friday morning in St. Louis, Federal Bureau of Investigation (FBI) authorities arrested Juan Thompson, who is alleged to have recently made numerous threats against Jewish community centers, Jewish schools, a Jewish museum and the Anti-Defamation League. (Photo by Drew Angerer/Getty Images)

A synagogue in Seattle has become the latest to fall victim to recent anti-Semitic vandalism.

Weiner told CNN affiliate KOMO, “It was just horrifically disturbing graffiti that kind of encompassed all classic anti-Semitic tropes of Holocaust denial and of Jewish affinity for money.”

The vandals replaced each S in the message with dollar signs.

According to a statement from Seattle police, an off-duty officer discovered the message Friday morning on the wall of the temple’s old sanctuary and contacted staff.

Gov. Jay Inslee also condemned it, saying in a statement, “It is the responsibility of each and every one of us to condemn any and all acts of hate and intolerance.”

A suspicious package also was found near the temple Friday, but police said later on Twitter that it turned out to be a book donation.

The graffiti is the latest in a wave of anti-Semitic vandalism and threats made to Jewish institutions all over the country.

Earlier in the day, staff at a Jewish community center (JCC) in Las Vegas received “suspicious communications,” according to the Las Vegas Metropolitan Police Department, prompting them to evacuate the area and investigate. Police reported the property safe a short time later.

In Tucson, Arizona, police were investigating the second threat in two weeks sent to a JCC. Sgt. Pete Dugan, a spokesman for the police department, said a bomb threat was received via email.

A Jewish community center typically provides a place for both Jews and non-Jews to participate together in social and recreational activities.

Since January, Jewish institutions have received 148 bomb threats, according to the Anti-Defamation League, which is keeping an up-to-date map of the incidents on its website. It says that the threats have come in six waves since the beginning of the year.

“This is the first time in the 60-plus years of our organization we have had a bomb threat called in. And now we’ve had three bomb threats this year,” said a Jewish community center CEO who wished to remain anonymous, fearing copycats would target his center. “It’s alarming.”

In a post on the Temple De Hirsch Sinai’s Facebook page, Weiner said the temple had taken steps to ensure the safety of the community, including increased security.

“And as we take all of these precautions, we are also adamant in our conviction that we will not allow the toxicity of intolerance and growing climate of hate to define who we are, how we live, and what our nation can be,” Weiner wrote.

“We take courage from the upcoming celebration of Purim and its story in the Book of Esther, as our people triumphed over the evil plans of those who seek to diminish and destroy us, and as we stand shoulder to shoulder with all who are vulnerable and in need, placing our faith in God to inspire us to perfect a broken world.”