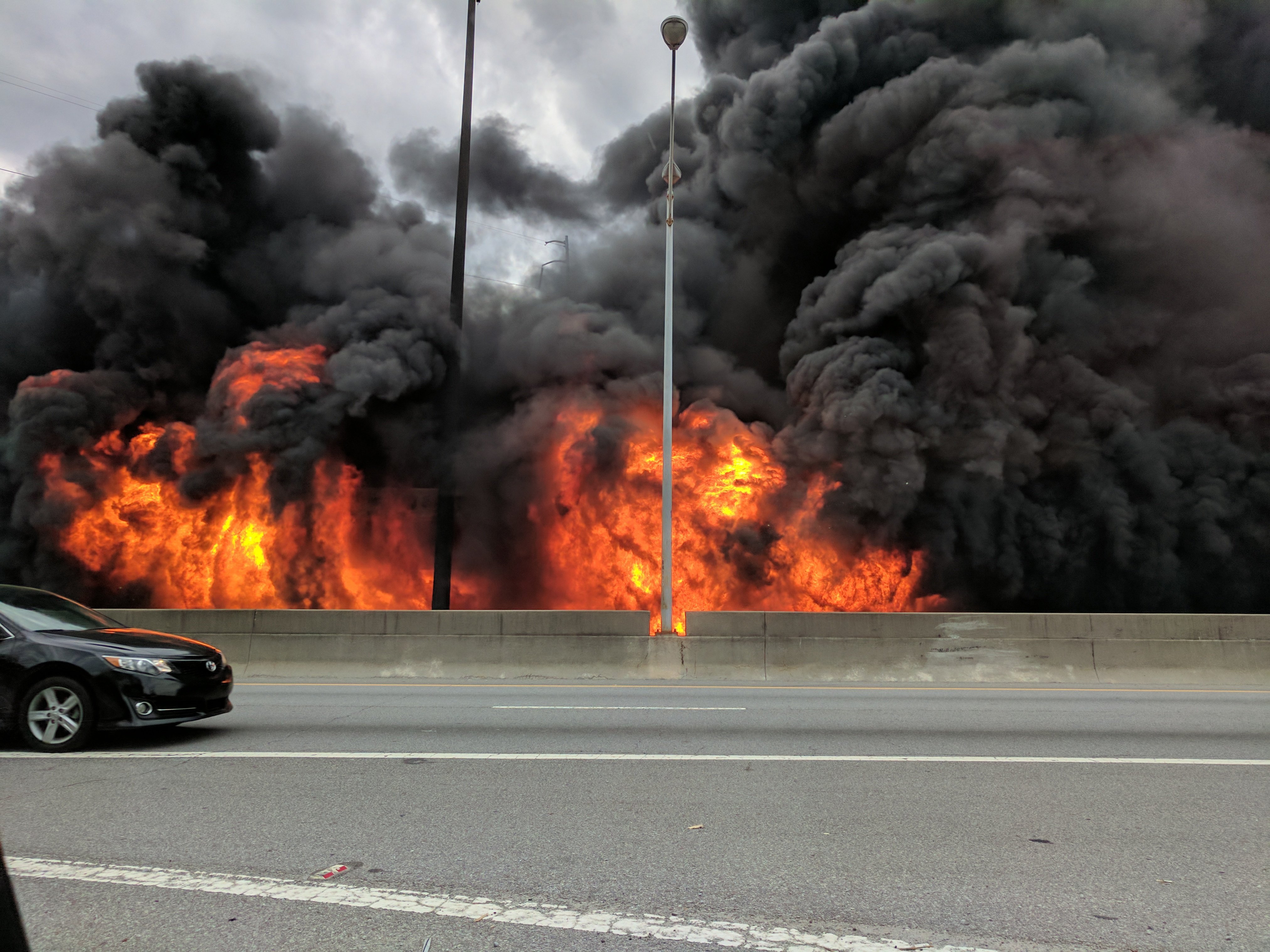 The man accused of arson in a massive fire that collapsed part of Interstate 85 in Atlanta discussed smoking crack with two others before the blaze started, an arrest affidavit shows.

Eleby and his two companions, Sophia Bruner and Barry Thomas, are believed to be homeless. They were arrested in connection with Thursday evening’s fire, said Jay Florence, the state safety fire commissioner.

An affidavit obtained by CNN shows Eleby told investigators that he and his companions talked about smoking crack cocaine under the highway overpass. He however decided to smoke without his companions, and left before the fire started, the affidavit said, citing his statement.

But one of the people with him disputed his account.

“Thomas watched Basil Eleby place a chair on top of a shopping cart, reach under the shopping cart and ignited it,” the affidavit said without providing details.

Investigators believe Eleby started the fire intentionally and his companions, both charged with trespassing, were with him at the time, authorities said.

The affidavit didn’t say how investigators came to suspect the three.

There were no deaths or injuries in the fire and collapse — but the damage has closed a major highway with five lanes in each direction that runs through the heart of Atlanta.

The city and region, already accustomed to traffic gridlock, is struggling to face its new commuting reality. It will take at least several months to rebuild the collapsed and otherwise damaged portions of I-85, Georgia Department of Transportation Commissioner Russell McMurry said.

The closure comes as hordes of spring break vacationers are poised to drive though the Atlanta area.

The fire ignited in a fenced-in area under the expressway, where the state stores construction materials, McMurry said. Those materials include HDPE — high-density polyethylene — pipes used in the “traffic management, cabling, fiber-optic and wire network,” he said.

HDPE pipes encase and protect cables, and are widely used in the transportation industry to build “smart” highways that provide information to drivers, control traffic signal lights and tollways. The pipes are also used in the distribution of natural gas and by telecommunication companies such as AT&T and Google Fiber.

The flammability of HDPE is relatively low, said Tony Radoszewski, president of the Plastics Pipe Institute, a trade group based in Irving, Texas. HDPE would have to be exposed to a high-temperature flame for a considerable amount of time to burn, he said.

“Somebody had to start a fire. It doesn’t combust by itself, it needs fuel,” Radoszewski told CNN. “Someone had to do it. It’s not like someone would have dropped a match and it started.”

Investigators are still working to determine how the fire started.

“We’re as eager to learn the cause of this fire as anyone,” McMurry said.

‘Highway fell with a big ‘kaboom’

Firefighters were alerted at 6:12 p.m. Thursday to the blaze under a section of the interstate in northeast Atlanta.

They rushed to the scene and fought the flames at street level as motorists on the elevated interstate drove through thick black smoke billowing up from below.

As the blaze grew, a massive fireball engulfed the overpass.

Around 7 p.m., “the highway fell with a big ‘kaboom.’ (It) knocked our guys back,” said Sgt. Cortez Stafford, a spokesman for the Atlanta Fire Department.

Amid the rubble of the fallen pavement, firefighters continued their work.

Officials scrambled to come up with alternate routes and encouraged riders to use public transit. Compounding long-term gridlock, the Atlanta Braves will play this season at their new stadium along the I-285 bypass.

“I think it’s as serious a transportation crisis as we could have,” Atlanta Mayor Kasim Reed said Thursday.

MARTA, Atlanta’s rail and bus system, is offering extended service through the weekend to take some of the burden off residents.