When an enemy is looking for you, especially an enemy with night vision technology, you want to keep cool and quiet. That’s why General Motors and the United States Army developed the hydrogen-powered Chevrolet ZH2 off-road truck.

The 6½-foot tall ZH2 doesn’t burn hydrogen. Instead, it pumps hydrogen into a fuel cell where it’s combined with oxygen. That creates water (H2O) while, at same time, releasing a stream of electrical energy to power the vehicle.

The truck was developed by GM in cooperation with the United States Army’s Tank Automotive Research and Development Center (TARDEC), headquartered near Detroit. Underneath its camouflaged Kevlar-reinforced carbon fiber skin, the ZH2 is based on the GM’s Chevrolet Colorado mid-sized pickup.

The big ZH2 is very quiet, but it’s not completely silent. When it starts up there is a whoosh of air being sucked in. When it’s moving, as it did recently through an off-road course at GM’s Milford Proving Grounds, there is some noise from the tires, suspension, electric motors and splashing mud. But, compared to a rumbling diesel truck, it’s nearly silent. In military parlance, there is minimal “accoustic signature.”

Since the truck isn’t burning any fuel, it doesn’t give off much heat that could be picked up by heat-sensing night vision cameras. In other words, there’s not much of a “thermal signature” either.

“We’re not doing it in this vehicle, but it is possible for us to take the exhaust gas from the engine, or the fuel cell, and actually create potable water,” said Brian Butrico, with the U.S. Army’s Research and Development and Engineering Command. “The soldiers can actually create their own drinking water as they’re operating the vehicle.”

Refueling the truck will be different from refueling a truck with liquid fuel. The ZH2’s thick-walled storage tank — 38 saw blades were required to cut one in half, according to GM — is filled with compressed hydrogen gas.

Although hydrogen is the most abundant element in the universe, it doesn’t ordinarily exist as a free-floating gas. It has to be extracted from substances that contain hydrogen, like water or hydrocarbon fuels. That can be done using portable devices that can run on solar or battery power or that plug in to a local electrical grid. 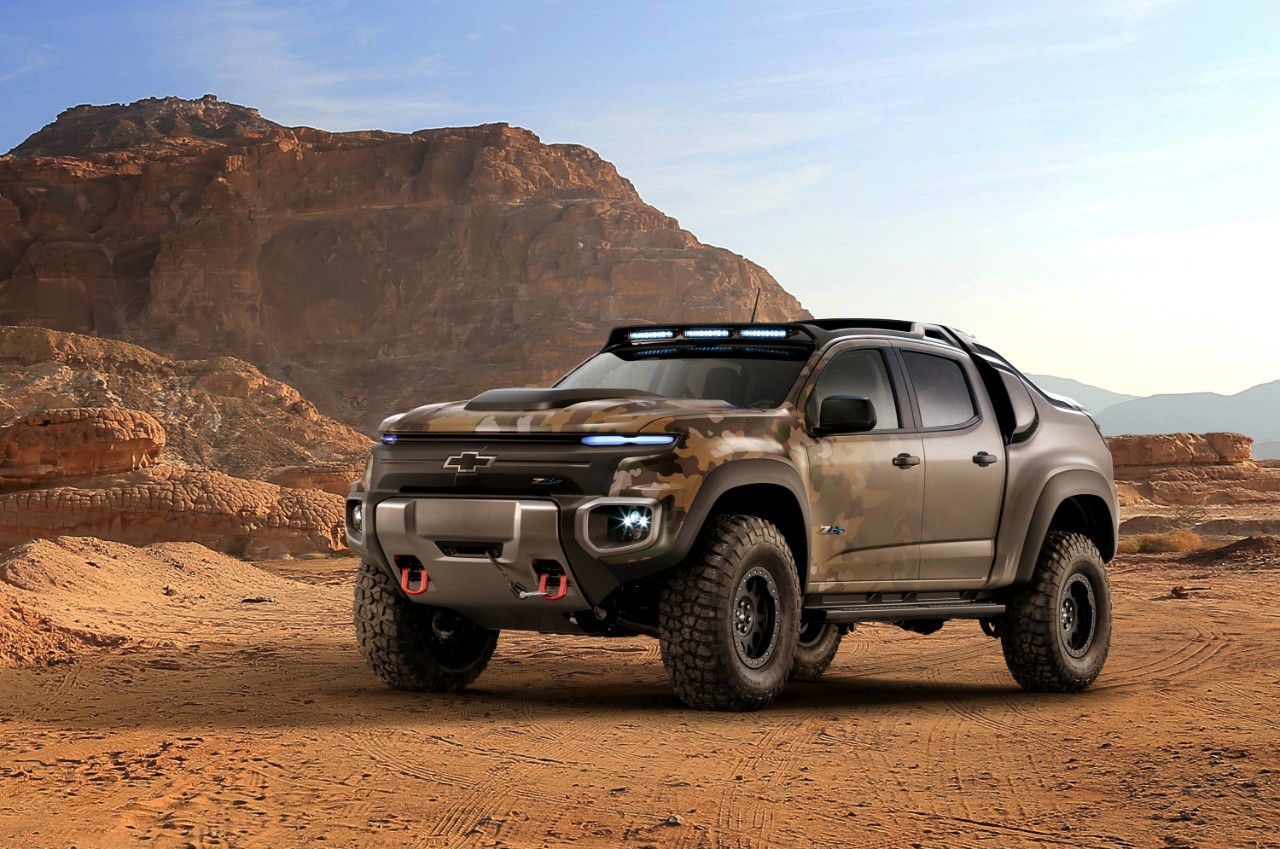 “Our machine will take JP8, which is the common military fuel, and convert it right into hydrogen,” said Butrico. Where ever it goes, it can make its own fuel.

Hydrogen gas could also be made form any sources on hand wherever the truck happens to be, he said. It takes about 3 minutes to fill the fuel tank, according to GM. With five to six kilograms of hydrogen — about 12 pounds — the ZH2 can go about 200 to 300 miles, said Charlie Freese, executive director for GM’s fuel cell business. It could go as far as 400 miles with a hydrogen tank optimized for longer range, he explained.

Prior to creating the ZH2, GM and the military had been experimenting with hydrogen fuel cells in strictly road-going crossover SUVs. Today, Toyota, Honda and Hyundai have fuel cell vehicles available for lease or sale to the general public in California.