CHESAPEAKE, Va. - A tornado might be one of Mother Nature’s miracles, but one Chesapeake woman says it was God’s miracle she survived a tornado.

“I told my kids, ‘they always say [a tornado] sounds like a train’,” said Sandra Pedroncelli. “The minute that came out of my mouth, it hit.”

Pedroncelli was in her living room when Thursday’s tornado tore open her bedroom.

“The bedroom was like a waterfall. It was just pouring in.”

However, Pedroncelli says she was supposed to be lying in her bed, recovering from cataract surgery, when the tornado struck. But that morning, doctor’s abruptly cancelled her surgery and rescheduled.

“I can’t imagine being in that bed,” Pedroncelli said, tearing up at the thought of it. “Waking up to that sound, I could have had a heart attack.”

Pedroncelli wasn’t the only survivor in her home. After family members checked on each other, they rushed to check on their pets, including Charlie, a piebald bull python.

“These are my kids!” said Pedroncelli’s daughter, Lisa Hoag, who lives with her mother. Altogether, Hoag takes care of Charlie, two pugs, two African tortoises, some rats, an axolotl salamander, and Neesa, a 9-year-old Argentine Tegu.

“This little girl right here is the sweetest, most cuddly, lovable creature,” said Hoag, holding up the Tegu. “I never thought I would say that about a lizard.”

All of them were lucky enough to survive the tornado. For now, Pedroncelli, her family and their exotic reptiles are safe to stay in their home while crews help patch up the damage.

While the tornado may have rocked her home, Pedroncelli says it certainly did not shake her faith in God.

“It was a miracle,” she said through tears. “To me, it was a miracle that God took care of me that day and I did not have the surgery.” 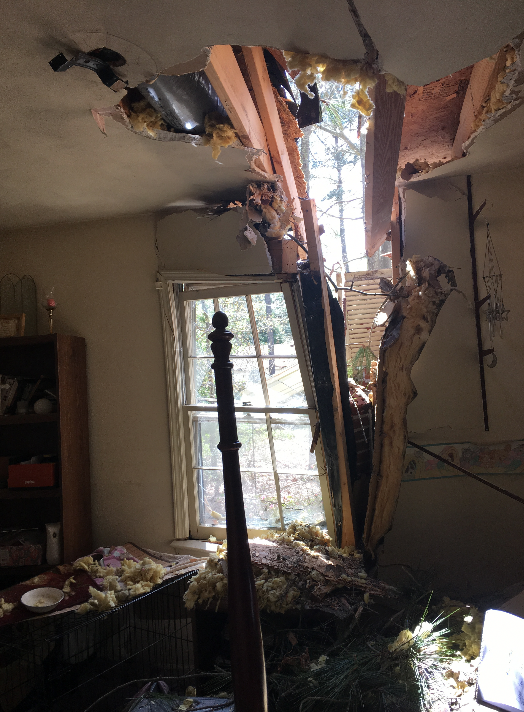