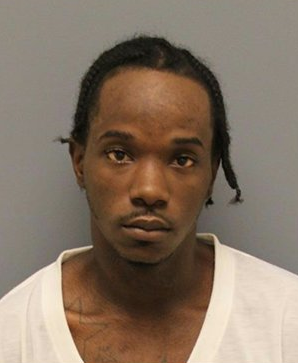 HAMPTON, Va. – Police arrested two suspects in connection with burglaries but one is still at large.

The suspects were allegedly involved in multiple commercial burglaries.

On March 27, around 3 a.m., multiple suspects forced entry into the AT&T Mobile store located in the 2100 block of Coliseum Drive.

Once they were inside the business the suspects reportedly removed multiple cell phones and fled from the area.

On April 5, around 5:30 a.m., three suspects forced entry into the Cricket Wireless store located in the first block of West Mercury Boulevard.

Police said once they were inside the business the suspects removed multiple cell phones and fled from the area.

As a result of the police investigation two of the suspects have been identified and charged for their involvement in both incidents.

22-year-old Keko Marcellous Hancox and 19-year-old Rayshawn Evonta Brown have both been charged with two counts of Burglary, two counts of Grand Larceny, and two counts of Conspiracy to Commit Burglary. They both remain in custody of the Hampton City Jail.

22-year-old Rashad Khalid Lowery, of Newport News, with a last known address in the 1st block of Colony Square Court, has been identified and currently has outstanding warrants on file for two counts of Burglary, two counts of Grand Larceny, two counts of Larceny with the Intent to Sell, two counts of Obtaining Money by False Pretenses, and two Counts of Conspiracy to Commit Burglary.

If you have seen Lowery or have information that could help police call the Crime Line at 1-888-LOCK-U-UP.