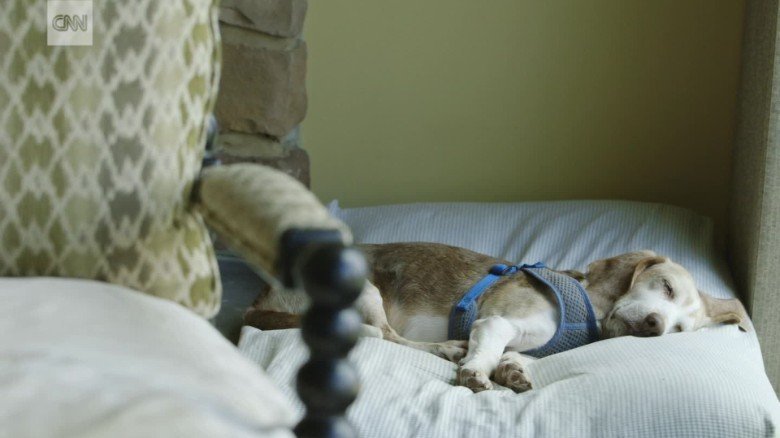 The brown-eyed beagle rests his head on the edge of his bed, his eyes peering out as volunteers walk by and stop to pet him. He’s known as “Much Loved Bob,” and volunteers say he doesn’t have much time left.

He’s one of about 27 dogs roaming Michele and Jeff Allen’s living room. All of the dogs are near the end of their lives, but the home is not filled with sadness. It’s a peaceful home, sitting on six acres about an hour away from New York City.

Dogs sit on any piece of furniture they choose, and half of the house is designated “dog quarters,” with toddler beds — designed for young children but perfect for slow-moving dogs — arranged around an electrically heated fireplace.

It’s a home filled with smiling volunteers who cuddle with their favorite dogs on sofas, or run with them around a pond outside. There are regular visits from a vet, and fresh, home-cooked dog meals made from scratch.

The Allens founded nonprofit Monkey’s House, a hospice for aged dogs, and they and run it at their Southampton, New Jersey, home. There, they pluck some of the sickest animals, like Much Loved Bob, from shelters.

Nearly 670,000 dogs are euthanized in shelters every year, according to the ASPCA, and the Allens are focused on saving dogs whose health problems are so complex and expensive that they wouldn’t be able to get the kind of care they needed at shelters.

“If you don’t know how sick they are, sometimes you just find them passed away in their kennels and that’s just a sad ending for a dog that deserves to be so loved,” said Michele Allen.

The Allens collaborate with shelters, animal control groups and veterinarians to bring in the dogs. Michele takes in new residents, evaluating their situations on a case-by-case basis. Most of the dogs that are brought to Monkey’s House are homeless and facing death at kill shelters.

The passing of one sick foster pup gave the couple the push to make their foundation official in 2015. “Monkey,” a feisty 13-pound shelter dog with heart problems and bad teeth, inspired the Allens, and the shelter’s name.

“In losing Monkey the grief was really, really tough and the greatest thing we could do was push through our grief in honoring him, and Monkey loved other dogs,” Michele Allen told CNN.

A former nurse, she decided hospice for abandoned terminally ill dogs was the best way to use her healing hands.

“I used to take sick dogs and say, ‘Well I can handle this — I used to be a nurse.’ Now I think I was a nurse and that was my preparation for this,” she said.

There are typically around 20 dogs living at Monkey’s House with illnesses ranging from heart conditions to diabetes or cancer.

A dog with health problems such as heart disease can rack up over a thousand dollars in expenses per month. Multiplying that by 24 makes funding Monkey’s House a daunting task, Michele says.

Completely donation-based, the nonprofit gets help from benefactors, and a dog food company that donates over 60 pounds of food per week. They also get support from more than 50 volunteers who lighten the workload.

Monkey’s House has also picked up a loyal following of animal lovers on social media, posting daily photos and stories of shenanigans. Much Loved Bob was mourned by thousands of animal lovers on Facebook when he passed away the day after CNN’s visit.

“He’s an invisible statistic. He’s the one that got out, the one that 37,000 people on Facebook know about, care about, send good thoughts about. It’s pretty amazing that he’s getting all this love now and that his ending is very different than I think probably the rest of his life was,” Michele Allen said.