The patches on little Devin Suau’s police uniform span the width of his arms. An oversized officer’s hat covers the six-year-old’s nose — so he tips it back.

Despite his honorary status as a police commissioner, Devin’s red sneakers aren’t part of the Boston Police Department’s official uniform. They’re the preferred footwear of a precocious boy whose favorite things include chocolate, ice cream and hanging out with police.

Boston PD is helping Devin face a life-threatening disease with strength and courage.

“Getting up in the morning, very early, 6:30 a.m., and going in for radiation — he doesn’t complain,” said Devin’s uncle, Boston Police Officer Justin Cremins. “He just gets up, pulls up his socks and his boots, and in he goes. I’m really proud of him.”

Life changed for the Suau family during a vacation back in January, when Devin fell off a snowboard and hit his head. His parents feared he’d suffered a concussion.

Then came the diagnosis.

Devin had an inoperable brain tumor with no known cure — a type of pediatric cancer known as Diffuse Intrinsic Pontine Glioma — or DIPG.

So the police departments of Boston and Framingham, Massachusetts, rallied around Devin.

“When we hear the fight of any kid facing a challenge of a debilitating disease, we step forward,” said Boston Police Superintendent-in-Chief William Gross. “You have to take care of the future and show parents that are going through this that they’re not alone.”

Devin’s parents recount the many acts of kindness and support — letters, pins, patches, mementos from police departments across the country, rides in police cars and with police escorts, honorary roles as commissioner of the Boston PD and chief of the Framingham PD.

Devin “has always loved heroes,” his mom, Christine Suau, told CNN. Her boy has, on occasion, been known to wander off and strike up a conversation with a police officer.

She says it means a lot to see real-life heroes tell her son that they’re rooting for him.

Last month, Devin represented the department in South Boston’s St. Patrick’s Day parade. He rode in a SWAT vehicle, waving to the crowd from the turret and wearing an officer’s cap on his head.

Cremins joined his nephew for the ride along the parade route. “The men and women that I work with everyday were out there lining the streets, and they were saluting, giving him thumbs up and cheering him on,” he recalled.

Police carried banners that said, “Cops for Kids with Cancer” and “#WhyNotDevin – Fighting for a cure to DIPG.”

The #WhyNotDevin hashtag has appeared across social media as a sign of support for the hope that Devin could be the first person cured of the disease. 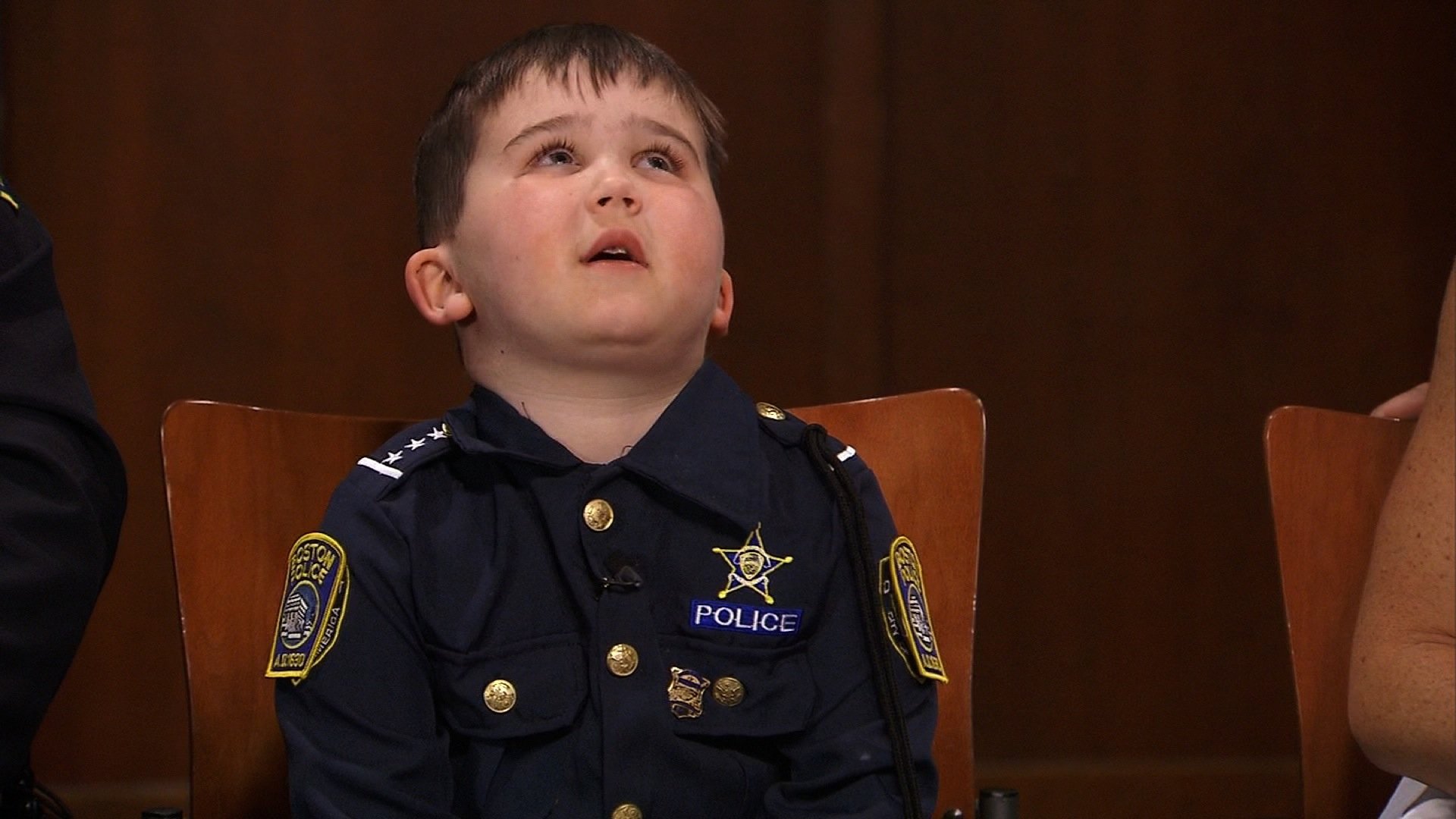 ‘I was kind of scared’

Devin has made it through six weeks of radiation treatment — five days a week. He “was like nothing ever happened,” his mother said. “He does not miss a beat.”

“I was kind of scared,” Devin said.

Doctors have estimated Devin has up to two years to live.

His family and “Boston’s finest” hope a cure will come soon. About 200-400 children between four and 11 are diagnosed with DIPG every year.

‘We have to take care of everyone’

Boston PD has also made 4-year-old Declan Higgins an honorary officer as he fights his own battle with brain cancer.

It’s all part of an effort to raise awareness and to support the community.

“It’s a village as a whole,” said Superintendent Gross, “and we have to take care of everyone in the village.”

The Boston Marathon and Pope Francis

Devin also helped his mom finish the Boston Marathon on April 17, after police arranged for him to join her and hold hands as they ran across the finish line.

Last Wednesday Devin and his family met Pope Francis, who blessed the boy.

“It’s something that helps us get through the day, knowing that there’s so many people out there that are praying for us, that are supporting us,” says Devin’s father, James Suau.

Support can come in different forms. For Devin, it’s in the shape of an ice cream cup, and spending time with the men and women who protect Massachusetts.