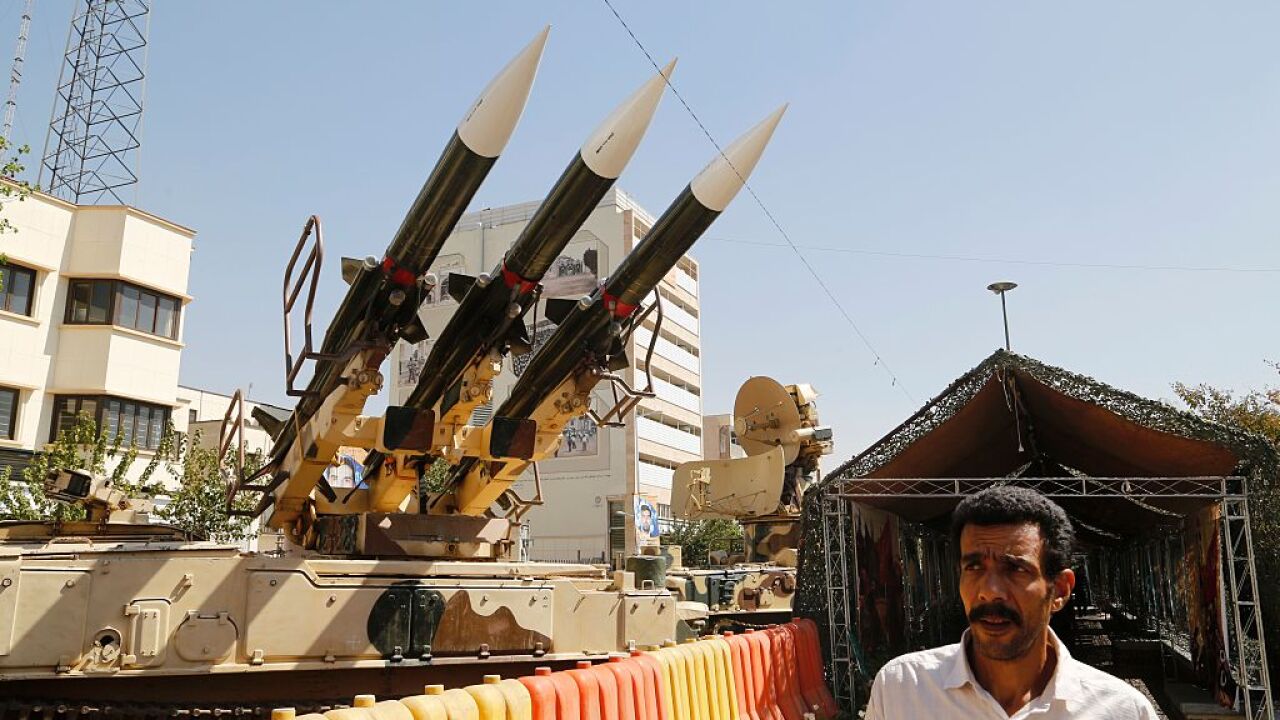 AN Iranian man walks past Sam-6 missiles displayed in the street during a war exhibition to commemorate the 1980-88 Iran-Iraq war at Baharestan square, south of Tehran on September 26, 2016. / AFP / ATTA KENARE (Photo credit should read ATTA KENARE/AFP/Getty Images)

The Trump administration ratcheted up the rhetoric on Iran Wednesday, declaring the international deal to restrain Tehran’s nuclear program had failed and that Iran continues to be “the world’s leading sponsor of terrorism.”

The nuclear deal forged by the Obama administration and allies “completely ignored all of the other serious threats that Iran poses,” Secretary of State Rex Tillerson said from the department’s ornate Treaty Room.

The day before, Tillerson — required by law to report regularly to Congress on Tehran’s adherence to the deal — had affirmed that Iran is abiding to the pact curbing its nuclear program. On Wednesday, however, he detailed Iran’s “alarming and ongoing provocations that export terror and violence, destabilizing more than one country at a time,” and said that if Iran goes unchecked, it “has the potential to travel the same path as North Korea.”

His statement was the latest in a drumbeat of warnings from the Trump administration that it is set to crack down on Iran and might reconsider the nuclear deal reached between the US, EU partners, Russia and China. But despite the rhetoric, diplomats and analysts say they don’t expect the administration to walk away from the deal, which aims to prevent Iran from gaining a nuclear weapon.

Instead, they see the administration’s harsh words as both a warning to rogue regimes such as North Korea and an effort to create political cover for sticking with the deal after President Donald Trump’s campaign criticism of the pact as a “horrible deal.” They note that the US is making these moves in the lead up to a quarterly international meeting in Austria to review the deal.

“We understand there is some tough talk for internal consumption and the US electorate,” one Western diplomat explained. “But we don’t foresee the US trying to reinterpret the agreement. At least that’s our understanding from the American side for now. We could be wrong.”

Another Western diplomat called the administration comments “a politically acceptable way of sending the certification to Congress” that Iran is holding to the deal, describing it as “certification dressed up in rhetoric” of criticism toward Tehran.

“The administration is doing an Iran review, but from what we hear the focus is more about what happens as parts of the deal expire, as opposed to actually opening the agreement up for renegotiation,” the second diplomat said. “None of the other countries would be up for that.”

The diplomat said the intensified language is also a shot across the bow by the US to Iran to warn: “Just because North Korea is misbehaving, it doesn’t mean we aren’t still watching you.”

But a senior administration official said the White House is serious about its reservations with the agreement, known as the Joint Comprehensive Plan of Action (JCPOA). The immediate concern is the ways in which the financial relief provided by the deal’s rollback of sanctions is being used by Iran to destabilize the region.

“The JCPOA was meant to provide economic relief to Iran in exchange for their suspending their nuclear program,” the official said. “It’s not clear we’ve achieved that result, and the economic relief they’ve received has been used on weapons systems and support for terrorism.”

The decision the administration is considering “is if providing additional such relief will be in the national security interests of the United States,” the official said.

Candidate Trump made criticism of the pact a centerpiece of his campaign, telling the American Israel Political Action Committee in March 2016 that “my number-one priority is to dismantle the disastrous deal with Iran.” He added, “let me tell you, this deal is catastrophic for America, for Israel and for the whole of the Middle East.”

While Tillerson blasted the deal because it didn’t address Iran’s destabilizing activities in the region, analysts and diplomats said it was designed that way because more comprehensive negotiations that took in other issues would have tanked the deal.

“The deal was limited by design,” said John Kirby, an Obama State Department spokesman and CNN military and diplomatic analyst. “There would have been no way to get a deal if we lumped in everything else we don’t like about Iran.”

Like the diplomats, Kirby said the administration may be looking for political cover.

“I think they felt he needed to come out and make this statement because (Tillerson) was forced by congressional reporting to admit Iran was in compliance” with the deal, Kirby said.

Though Tillerson certified on Monday that Iran is sticking to the terms of the nuclear deal, he announced that the US would be reviewing whether the deal’s requirement to lift sanctions in exchange for Iran curbing its nuclear program is in US national interests.

Reapplying sanctions would violate the terms of the deal orchestrated by former President Barack Obama alongside Russia, China and the EU.

Proponents of the deal say that abandoning it would make other challenges in the Middle East even harder, emboldening Iranian hardliners and triggering Iran to restart its nuclear program, which could start a nuclear race in the region as other countries rushed to get their own bomb.

Ahmad Majidyar, director of the Iran Observed Project at the Middle East Institute, said that “with a nuclear deterrent, Iran would most likely increase its support for groups in the region, which would definitely not improve regional or international security.”

The administration official countered that “Iran’s program is ongoing, they continue to enrich uranium, and other regional powers are already considering their options. The hardliners are already emboldened. And our allies, notably Israel, are extremely upset at the moment about Iranian aggression in the region.”

The official concluded, “I’m not sure that’s a compelling case to stay in the JCPOA and continue to provide the sanctions relief that is fueling Iran’s belligerent and dangerous behavior.”

Administration officials said the US is looking at ways to more strictly enforce the terms of the nuclear deal and impose tougher sanctions related to Iran’s activities in the Middle East, which the US and its allies see as destabilizing. That includes Iran’s support for Houthi rebels in Yemen, its backing for Syrian President Bashar al-Assad and for Islamic militant groups like Hezbollah in Lebanon.

But Majidyar argued that scrapping the deal wouldn’t help Washington.

“It would more isolate the United States than it would isolate Iran,” he said, noting that other world powers are party to the deal. “What I see is a more strict (US) interpretation of the deal and that interpretation will be different than Iran’s interpretation.”

Those parties have been talking for some time to the UN watchdog International Atomic Energy Agency about clarifying various aspects of the deal that were ambiguous to ensure stricter implementation, the first diplomat said.

Administration officials have made clear in recent days that they are very focused on Iran. White House press secretary described the attention as a sign that Trump believes there are problems with the deal. “If he thought everything was fine, he would have allowed this to move forward,” Spicer said.

In the Middle East, Defense Secretary James Mattis on Wednesday told reporters who asked about Iran’s role in Yemen and elsewhere that, “Everywhere you look, if there’s trouble in the region, you find Iran.”

“Right now, what we’re seeing is the nations in the region and others elsewhere trying to checkmate Iran and the amount of disruption and the amount of instability they can cause,” he said after a meeting with officials in Saudi Arabia, Tehran’s Sunni rival.

And last week, CIA Director Mike Pompeo told an audience at the Center for Strategic and International Studies that “we’re actively engaged in a lot of work to assist the President in making sure he has an understanding on where the Iranians are compliant and whether they might not be.”

Since the pact was signed, Pompeo said, “The list of Iranian transgressions has increased dramatically.”