A sign posted in Tree Streets Inn area of Waynesboro warns that outdoor pet cats have been abducted, shaved and then returned home.

“Several neighborhood cats have been abducted and had their lower abdomens and groin areas shaved. This is very upsetting to the cats and their owners,” the sign reads.

Police in Waynesboro said there have been reports of at least seven cats shaved since December.

Capt. Kelly Walker, who said officers first learned of the incidents earlier in the week, told the Roanoke Times it appears the culprit used a type of razor to precisely shave the animals’ underbellies.

“The cats are wearing collars and are well-groomed,” Walker said, adding that the animals are obviously not stray or feral. 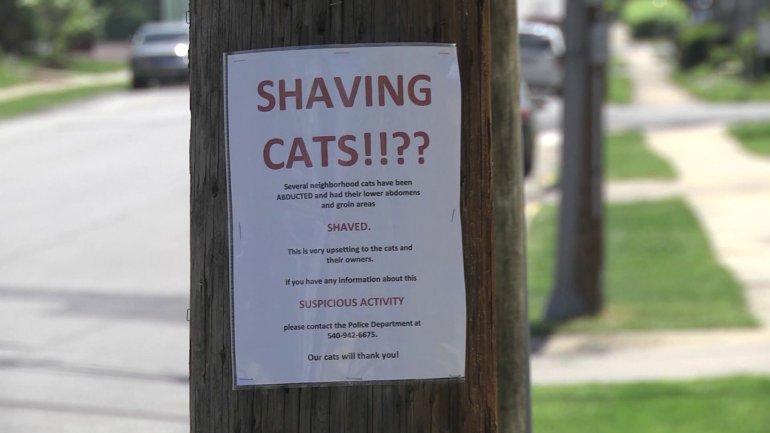 Martin said “Tigerlily” was not the same when she returned home.

And Martin said she knows the experiences traumatized her cat.

“It hurts, because she can’t tell me,” Martin worried. “I know it probably hurt her, but not physically, but mentally that has to be really hard on her, knowing she can’t tell me about it.”

Maia Oden told WHSV that the same thing happened to her cat a few weeks ago.

“He’s real skittish and he feels really weird around people,” Oden explained. “And something’s happened to him and so we looked and he’s been shaved underneath.”

Officers told WHSV that it could be someone checking to see if the cats were spayed or neutered.

Police said they are not sure if an actual crime has been committed, but are hoping whoever is responsible will stop.

If you see anything suspicious or have information that could help police, the Waynesboro Police Department at 540-942-6675.