Army combat photographer captures explosion that killed her, 4 others

ANNAPOLIS, Md. – A young US Army soldier captured through her camera lens the explosion that took five lives — including her own.

Twenty-two-year-old Spc. Hilda I. Clayton died as she was teaching the tenets of documenting war — something she excelled in as a combat photographer.

She was killed along with the Afghan military photographer she was training and three Afghan National Army soldiers when a mortar tube exploded during a joint live-fire training exercise in July 2013.

The image Clayton captured freezes the fatal moment — rocks kick up and the orange flare of the blast cuts across the blue Afghan sky. Now the photo has been published in the Military Review. The current issue of the military journal “seeks to promote the concepts gender equality,” a note accompanying the image states.

The Army decided to publish the photo in hopes it shows the increased exposure that women have “to hazardous situations in training and in combat on par with their male counterparts,” Military Review wrote. 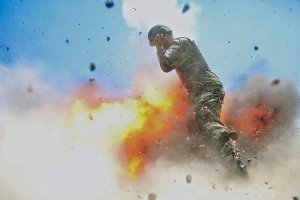