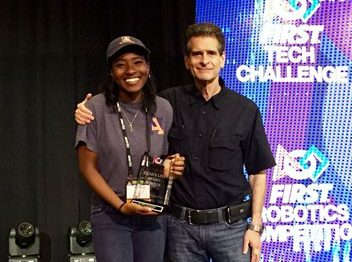 The FIRST Championship is an international event that brought in more than 15,000 students from 33 countries.

Hibbert, who has been on the Bulldogs Robotic Team for the past two years, was selected as one of 20 students who won the FIRST Dean’s List Award. She was one of five students in the state to compete for the award.

Hibbert competed at the FIRST Tech Challenge level, which requires teams to create the most complex robots.

“When they called my name, I almost felt numb as I walked across the stage,” Hibbert said. “After receiving the award, I felt so proud that I could represent my team at such a high level.”

Hibbert’s win marks a significant step for Norfolk Academy Robotics, which started in 2012.

Physics teacher and the team’s faculty advisor Robert Call says this year’s team had a lot of enthusiasm and drive.

“This year’s team did a fantastic job.  Their success was due in large part to our team leaders and Chai was an important member of that group,” Mr. Call said. “Chai was particularly good at handling the details that other people overlooked. She did a great job of looking at the broader scope of FIRST beyond being a robot-building competition.”

The school’s robotics team continues to grow. This year’s team had 21 students, but the school’s headmaster says the new engineering curriculium in the lower school may fuel more interest in the years ahead.

“We are delighted, of course, about this news and proud of Chai,” said Headmaster Dennis G. Manning. “Her extraordinary achievement comes in the context of  our increased emphasis on STEM education, the number of Ph.D’s on our faculty,  our robotics program, and our transformational new Lower School Engineering, Design, and Innovation initiative. These are national-caliber programs clearly bearing national-caliber results.”