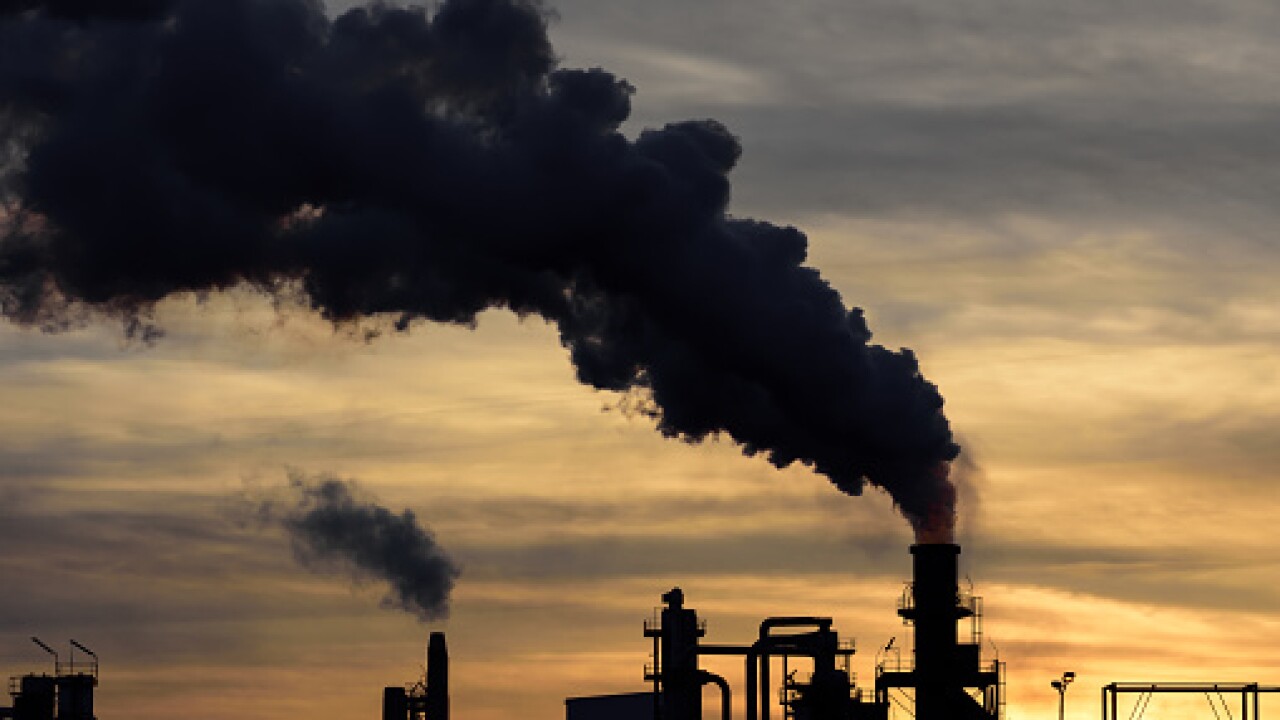 – Factories, power plants and other facilities in Virginia released about 35 million pounds of toxic chemicals into the state’s water, air and land in 2015, according to the U.S. Environmental Protection Agency. More than half of the pollution came from just five facilities, the EPA’s Toxic Release Inventory showed.

Most of the pollution in Virginia involved nitrate compounds released into the water and ammonia, hydrochloric acid and methanol released into the air, an analysis of the TRI data found. The releases included more than 1 million pounds of carcinogens – cancer-causing chemicals such as acetaldehyde, styrene and lead.

The TRI database details which chemicals are released by which facilities, how much is released and where the pollution goes. The latest data is for 2015.

The Radford Army Ammunition Plant, located along the New River in Montgomery County, emitted more toxic chemicals into the environment than any other facility in Virginia. The plant, the U.S military’s primary gun and rocket propellant provider, released more than 10 million pounds of pollutants, mostly nitrate compounds going into nearby waters.

Prolonged exposure to nitrates can lead hypertension and other cardiovascular problems, birth defects and headaches, according to the U.S. Centers for Disease Control and Prevention.

The Radford plant was the second biggest water polluter in the nation in 2015, the data showed. Only the AK Steel Corp. operation in Rockport, Indiana, emitted more toxins into the water – over 13 million pounds. In terms of total on-site releases (including air and land), the ammunition facility ranked 35th nationwide.

According to the TRI data, after the Radford plant, the Virginia facilities with the most on-site releases in 2015 were:

Ladelle McWhorter, who chairs Virginia Organizing, which advocates for a clean environment and other issues, said she finds the amount of pollution deplorable.

“It kills people,” McWhorter said. “It sickens and disables people. It causes birth defects. It decreases property values, so it impoverishes people. And it makes our surroundings ugly and depressing.”

Virginia Organizing has participated in an array of campaigns to combat pollution and climate change.

The group helped get CSX to stop parking train cars filled with hazardous materials near a low-income neighborhood in Fredericksburg. Currently, the organization is working with other groups to oppose the Atlantic Coast and Mountain Valley pipelines, which McWhorter said would threaten water supplies.

“We have been working and are continuing to work on reducing air pollution, and of course that has benefits beyond reduction of greenhouse gases,” McWhorter said. Her organization tries to practice what it preaches: The group’s central office runs on solar power and uses hybrid fleet cars.

Details from the TRI database

The Radford Army Ammunition Plant released 10 different chemicals into the environment. Although nitrate compounds going into the water made up more than 95 percent of the emissions, the plant also reported air releases of hydrochloric acid (283,000 pounds), sulfuric acid (75,000 pounds), nitroglycerin (58,000 pounds) and ammonia (24,000).

The MeadWestvaco plant in Covington released more than 20 chemicals into the environment. The most prominent was methanol, with 1.6 million pounds emitted into the air from a smoke stack.

Methanol can take a toll on the nervous system if ingested, the CDC says. Side effects include brain fog, difficulty breathing, visual impairment, diarrhea, nausea and vomiting.

Honeywell International’s Hopewell plant produces nylon for carpets and chemicals used in fertilizer. It released more than 2 million pounds of ammonia into the air in 2015. Exposure to high levels of ammonia can cause difficulty in breathing, eye irritation, burning of skin, visual impairment and loss of consciousness, according to the CDC.

The facility also released more than 13,000 pounds of acetaldehyde and about 8,700 pounds of benzene, another carcinogen.

The Hopewell plant was owned by Honeywell until October, when it was spun off to another company called AdvanSix. According to Debi Lewis, the communications officer for AdvanSix, the plant has spent more than $50 million on health, safety and environmental improvements since 2010.

“AdvanSix takes all environmental compliance matters seriously, and our team focuses on these issues every day,” she said in an email.

“We are focused on decreasing pollutants in the air. The plant is spending $110 million in projects to be completed by 2019 designed to reduce overall air emissions and to cut some air emissions by 50 percent from 2014 levels,” Lewis said.

About half of the Chesterfield Power Plant’s releases were air emissions – mostly hydrochloric and sulfuric acids. The other releases involved substances such as barium, vanadium and manganese compounds found in coal ash. Dominion Resources, which owns the power station, stores the coal ash in surface impoundments.

Excessive amounts of barium may cause gastrointestinal disturbances and muscular weakness, as well as abdominal cramps, diarrhea, difficulties in breathing and other problems, the CDC says.

According to the TRI, on-site releases at the Chesterfield Power Plant jumped about 8 percent from 2014 to 2015; however, they were 44 percent lower than in 2010.

International Paper’s plant in Franklin and Isle of Wight County released 17 chemicals. The main one was methanol (800,000 pounds), followed by hydrogen sulfide and ammonia – all released into the air. The plant released two carcinogens: acetaldehyde (about 27,000 pounds) and formaldehyde (12,000).

Emissions from the paper plant tripled from 2010 to 2015. However, emissions dropped 10 percent during the most recent year.

Overall, facilities in Virginia have made progress in reducing toxic emissions. Statewide, on-site releases have fallen from more than 49 million pounds in 2010 to about 38.5 million in 2014 and 35 million in 2015. That is a 29 percent drop during the five years – and a 9 percent reduction from 2014 to 2015.

Since 2010, several facilities have slashed their on-site releases dramatically, such as the Tyson Farms operation in Accomac County (down 97 percent) and Perdue Farms’ Accomac Processing Plant (down 82 percent). Emissions also plunged at the Philip Morris USA’s Commerce Road site in Richmond (down 93 percent), at Dominion Resources’ Yorktown Power Station (down 85 percent) and at the U.S. Marine Corps base at Quantico (down 73 percent).

The TRI database includes reports on 440 facilities in Virginia. They provided information on more than 140 toxic chemicals. Almost all of the chemicals are legal in certain amounts under certain circumstances under the federal Clean Air Act, Clean Water Act and other regulations enforced by the EPA.

However, the agency has fined Virginia companies for violating environmental rules. The EPA lists all inspections, violations and fines on its Enforcement and Compliance History Online database. The EPA rates violations as high-priority violations, significant violations or noncompliance, based on the violation and the applicable regulation.

For example, the Honeywell International in Hopewell has been in high-priority violation of the Clean Air Act for particulate matter and other pollutants since July 2014.

“The Hopewell plant is currently in compliance for particulate emissions, and issues in previous years were related to specific equipment malfunctions,” Lewis said. “AdvanSix has invested a significant amount of capital to address these issues, and we will continue to evaluate and invest as appropriate.”

In the past five years, the Hopewell plant has received 10 informal notices of violations and has paid more than $700,000 in fines for violations of the Clean Air Act and the Clean Water Act. After a lawsuit in 2013, Honeywell International paid $3 million in penalties, plus millions more to bring its facility into compliance.

The Radford Munitions Plant was fined almost $270,000 in 2016 for violations of the Clean Air Act and has received two informal letters of violation so far this year.

Chesterfield Power Station has not paid fines in the last five years. However, Virginia Power, a Dominion subsidiary, paid more than $5 million in penalties to the federal government after a lawsuit resolved in 2016 involving unpermitted additions to the Chesterfield generating station and nine other facilities.

The International Paper Franklin Mill paid almost $11,000 in fines for violations of the Clean Water Act in 2014 for a discharge without the proper permit but has no recent violations.

Daniel Carr, a professor in the environmental studies department at Virginia Commonwealth University, said that it is often easier for companies to pay the fines than bring their factories into compliance.

If meeting regulations could lead to bankruptcy but companies can cover the fines associated with violations, there may be no motivation for them to comply, he said.