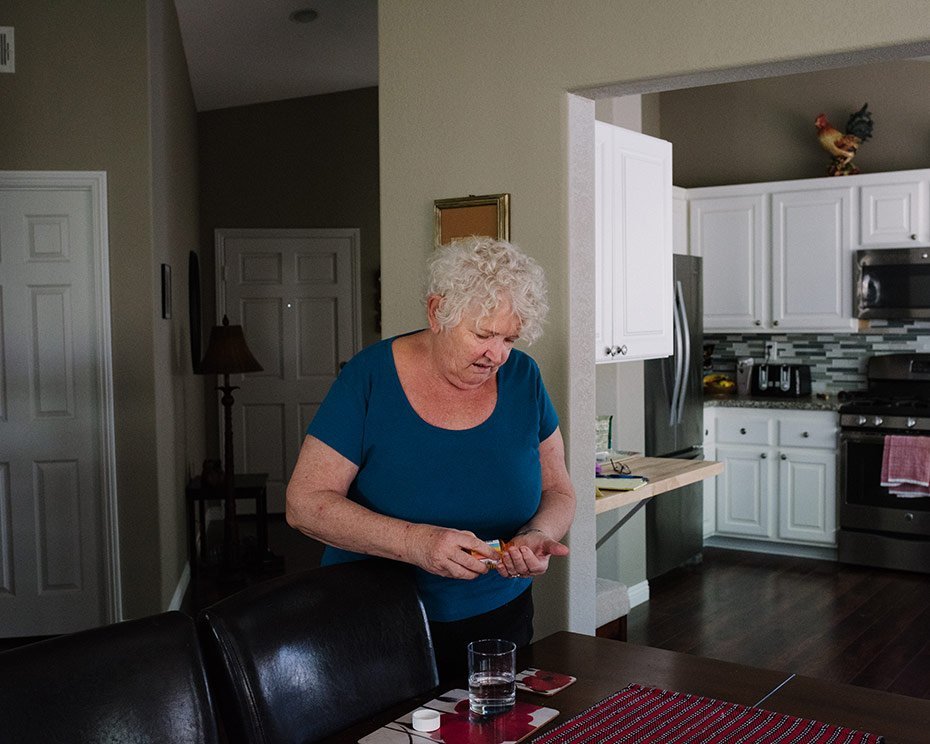 “I found out something was wrong because my right leg swelled up enormously,” she said. “They did an ultrasound and found I was completely full of these lymph nodes. It was stage IV large-cell lymphoma.”

Grueling chemotherapy treatments have started robbing her of mobility. “It’s a strange nerve thing,” she said. “I don’t always know where my feet are. I have to look down to see where they are.”

And the symptoms “will be progressively worse. There’s no cure. Eventually, I will probably end up fairly immobilized.”

For 12 years, Sheppard had no idea what might have caused her non-Hodgkin’s lymphoma — until a group of cancer researchers reported (PDF) that glyphosate, the key ingredient in the popular weed killer Roundup, is “probably carcinogenic to humans” (PDF).

That’s the same herbicide Sheppard said she sprayed on her coffee farm in Hawaii for five years.

Sheppard is one of more than 800 cancer patients suing Monsanto, the maker of Roundup, claiming the company failed to warn consumers about the risk of cancer associated with Roundup products.

Monsanto says there’s no proof that glyphosate is carcinogenic. In fact, it cites a report by the Environmental Protection Agency’s Cancer Assessment Review Committee that said glyphosate is “not likely to be carcinogenic to humans” (PDF).

But the former chairman of that committee offered to stop an independent review on whether glyphosate could cause cancer, according to a plaintffs’ motion to compel his deposition. And that has left Sheppard even more incensed.

The World Health Organization’s International Agency for Research on Cancer caused a stir in March 2015 when it said glyphosate is “probably carcinogenic to humans” (PDF), meaning it can lead to cancer.

“For the herbicide glyphosate, there was limited evidence of carcinogenicity in humans for non-Hodgkin lymphoma,” the report states.

“The evidence in humans is from studies of exposures, mostly agricultural, in the USA, Canada, and Sweden published since 2001. In addition, there is convincing evidence that glyphosate also can cause cancer in laboratory animals.”

Timothy Litzenburg’s law firm represents more than 500 of them. He said most of the patients didn’t know about a possible link between Roundup and non-Hodgkin’s lymphoma until the report came out.

“It would not surprise me in the least if there are 2,000 to 3,000 cases by the end of the year,” Litzenburg said. “This is the most-used herbicide in the world … from the largest farm operations to backyard gardens. It’s ubiquitous.”

But many other companies also sell products containing glyphosate. Why aren’t they targeted in these lawsuits?

“This is an oversimplistic answer, but Monsanto invented/discovered it, they held the patent for many years, they are the EPA registrant for glyphosate, and they continue to dominate the market,” the attorney said.

“Glyphosate-based herbicides, including Roundup-brand formulated products with surfactants, all have a long history of safe use and do not pose any unreasonable risk to human health when used according to label directions,” Lord said. “The safety of each labeled use of a pesticide formulation must be evaluated and approved by regulatory authorities before it is authorized for sale.”

Sheppard said she knows skeptics will say she can’t prove that her cancer came from using Roundup. But she said the hundreds of plaintiffs with similar stories — combined with the report — show “such strong circumstantial evidence that the total adds up.”

But Monsanto said there are more than 800 studies demonstrating glyphosate’s safety, including studies conducted internationally.

“In fact, since IARC classified glyphosate, regulatory authorities in the United States, Europe, Canada, Japan, New Zealand and Australia have publicly reaffirmed that glyphosate does not cause cancer,” Lord said.

For example, the European Chemicals Agency said last month that glyphosate is “not classified as a carcinogen.”

Monsanto stressed that the International Agency for Research on Cancer report does not establish a link between glyphosate and an increase in cancer.

But recently unsealed court documents appear to show Monsanto mounting its effort to discredit the report before it was even released.

A month before the IARC report came out in 2015, Monsanto executive William F. Heydens sent an internal email to company toxicologist Donna Farmer with the subject line “RE: IARC planning,” according to court documents. In that email, he suggested ghostwriting parts of an “overall plausibility paper” to save money.

“If we went full-bore (with experts), we could be pushing $250K or maybe even more,” Heydens wrote.

He said a “less expensive/more palatable approach” might be to involve experts only for some of the less contentious parts of the report. Then, Monsanto would “ghost-write the Exposure Tox & Genetox sections.”

“[W]e would be keeping the cost down by us doing the writing,” the email said. Afterward, scientists outside Monsanto “would just edit & sign their names so to speak.”

“Recall that is how we handled Williams Kroes & Munro, 2000,” Heydens wrote, referring to a previous report on glyphosate.

After the emails were unsealed in March, Monsanto said in a statement that the 2000 report was not ghostwritten and that Heydens’ email was taken out of context.

“Recently, in the context of personal injury litigation filed against Monsanto, plaintiffs’ attorneys have cherry picked a single email — out of more than 10 million pages of documents produced — to allege that Monsanto scientists ghostwrote ‘Safety Evaluation and Risk Assessment of the Herbicide Roundup and Its Active Ingredient, Glyphosate, for Humans,’ ” the company said.

“These allegations are false. Monsanto scientists did not ghostwrite the paper.”

The company added that the report, published in 2000 in Regulatory Toxicology and Pharmacology, went through that journal’s “rigorous peer review process before it was published.”

But what about the 2015 glyphosate paper — the one that Heydens suggest his company “ghost-write,” according to the recently unsealed emails? Did Monsanto actually “ghost-write” parts of that report?

“No,” Monsanto spokeswoman Camille Scott told CNN. “The paper and its conclusions are the work of the glyphosate expert panel. The paper also underwent (a) rigorous peer review process before it was published.”

Scott said Monsanto retained a scientific consultant to convene the panel to review the international agency’s assessment that glyphosate was “probably carcinogenic to humans.”

The experts were asked to examine the agency’s data and assess the scope of the research included or excluded, Scott said. They concluded that “the data do not support IARC’s conclusion that glyphosate is a ‘probable human carcinogen.’ ”

A month after the report said glyphosate could cause cancer, Heydens sent an email to Monsanto’s US agency lead — the liaison to agencies such as the EPA — about the possibility of “doing more work to help us deal with the IARC fallout.”

Dan Jenkins, Monsanto’s US agency lead at the time, replied and suggested talking to Jess Rowland, then chairman of the EPA’s Cancer Assessment Review Committee.

But the next day, Jenkins said Rowland called him “out of the blue.”

“Jess [Rowland] called to ask for a contact name at ATSDR,” Jenkins wrote, referring to the federal Agency for Toxic Substances and Disease Registry.

At the time, the registry — part of the US Department of Health and Human Services — was working on its own investigation into glyphosate (PDF).

“(Rowland) told me no coordination is going on and he wanted to establish some saying ‘If I can kill this I should get a medal,’ ” Jenkins wrote, as shown in the plaintiffs’ motion to compel the deposition of Rowland.

“However, don’t get your hopes up, I doubt EPA and Jess can kill this; but its good to know they are going to actually make the effort now to coordinate due to our pressing and their shared concern that ATSDR is consistent in its conclusions w EPA.”

The report on glyphosate by the Agency for Toxic Substances and Disease Registry was never killed. In fact, researchers are still working on it, registry spokesman Larry Furphy said Friday.

“ATSDR is in the process of developing a Toxicological Profile for glyphosate,” Furphy wrote in an email to CNN.

“For glyphosate, much of the scientific literature is continuing to emerge, and the agency wants to ensure that we have all the evidence from recent and pending literature reviews.”

Furphy said the agency expects to release a draft of the report by the end of the year.

In a separate Monsanto email, dated September 3, 2015, Jenkins told colleagues that Rowland was planning to retire in about five to six months “and could be useful as we move forward with ongoing glyphosate defense.”

Rowland has since retired from the EPA and has not responded to requests for comment.

When asked about the litigation, an EPA representative said it is “a dispute between private litigants, and EPA is not a party to the case. Beyond that, the Agency does not comment on active litigation.”

Litzenberg said the court documents “seem to show an inappropriately close relationship” between Monsanto and the former EPA official.

But Monsanto spokeswoman Lord said the company has never paid, given gifts to or done anything else to curry favor with anyone from the EPA.

“As part of a highly regulated industry, Monsanto routinely responds to EPA requests for data and information about our products,” she said. “Monsanto fully respects the EPA’s role in regulating pesticides, and we work to provide accurate information and answer questions to ensure that the agency can make decisions based on thorough and complete science.”

The National Pesticide Information Center acknowledges conflicting reports about the risk of cancer with glyphosate.

“When high doses were administered to laboratory animals, some studies suggest that glyphosate has carcinogenic potential,” said the center, a cooperative between Oregon State University and the EPA.

“Studies on cancer rates in people have provided conflicting results on whether the use of glyphosate containing products is associated with cancer. Some studies have associated glyphosate use with non-Hodgkin lymphoma.”

Non-Hodgkin’s lymphoma is a common cancer that starts in the lymphatic system. About 72,000 people are expected to be diagnosed this year, according to the American Cancer Society. An estimated 20,000 people will die from it in 2017.

‘They took away our dreams, our savings’

While the lawsuits work their way through court — the next phase of discovery is expected in October — Sheppard said she’s trying to manage her illness the best she can. That means avoiding planes and any crowded place.

“My immune system doesn’t allow me to travel much,” she said. “If I get sick, I get sick for a long, long time.”

She and her husband had to sell their coffee farm in Hawaii and move to California for cancer treatment. Sheppard said she has depleted her 401(k) to pay for medical bills.

“They didn’t take away my life, thank goodness, but they took away our dreams, our savings,” she said.

Sheppard said she now wants two things: Monsanto to stop selling Roundup, and an apology from the company.

She said she doesn’t think she’ll get the latter.

“I think Monsanto is going to fight this to the bitter end.”