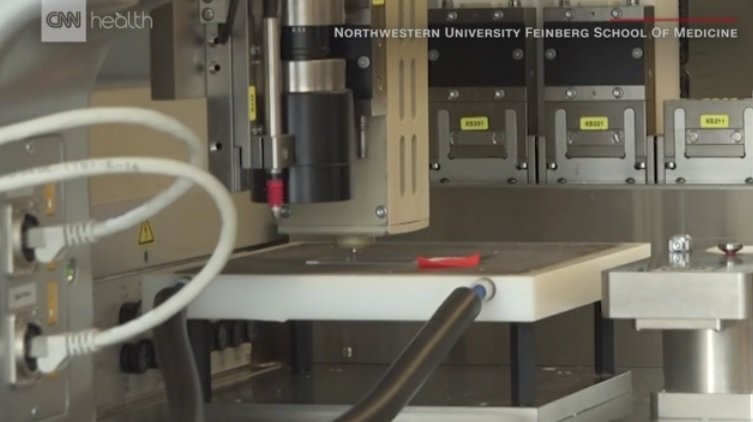 A new era of regenerative medicine could be on the horizon. A 3-D printed ovary allowed an infertile mouse to naturally mate and then go on to give birth to two pups of their own, according to new research published Tuesday in Nature Communications.

The 3-D printed bioprosthetic ovary, as it’s termed, is “the holy grail of bioengineering for regenerative medicine,” said Teresa K. Woodruff, a reproductive scientist and director of the Women’s Health Research Institute at Northwestern University Feinberg School of Medicine.

“The long-term goal for this is cancer patients,” said Woodruff. She hopes this new research, a collaboration with other scientists including Ramille Shah, an assistant professor of materials science and engineering at McCormick School of Engineering, will result in a way to restore fertility in women who underwent life-preserving cancer treatments that rendered them sterile.

Ovaries are essential to the female reproductive system. Not only do these glandular organs produce hormones, when healthy they also release at least one egg each month for possible fertilization.

The basic unit of the ovary is the follicle, each of which contains a single egg surrounded by the cells that make the hormones estrogen and progesterone.

“Every month there is this really remarkable event,” said Woodruff. “The ovary breaks down under hormonal control and allows the oocyte, the female egg, to move from the inside to the outside and it moves into the fallopian tube where it is fertilized.”

For an artificial ovary to be functional it would need to facilitate ovulation.

“What that does is it provides follicles with the space to grow,” said Shah. “But also it allows space for blood vessels to infiltrate the scaffold without degrading the material.”

Once seeded with follicles, the structure was transplanted into mice whose ovaries had been removed. From there, the follicles matured, and the mice ovulated. Mating, their eggs were fertilized and eventually they gave birth to at least two pups each.

Within the bodies of each mouse, explained Woodruff, the structure had become “a functionalized soft-organ transplant.” The recipient mice actually coordinated development of ovarian tissues in their bodies, she said, because the flow of their blood through the pores of this structure helped transform it into a functional bioprosthetic.

Shah is hoping to refine the work, beginning with the pores themselves.

“This is our bioprosthetic ovary version 1,” she said, which she admits was a pleasant surprise when it worked on the first try because that usually doesn’t happen. If you look at a cross-section of an ovary, she explained, you would see varying sizes and shapes of the many pores it contains. This is so it can house follicles that are at different maturity stages.

“You have to house both the small ones and the large ones and you have to have an environment that can provide cross-talk between these follicles, because that’s how the natural ovary signals for only specific ones to ovulate,” said Shah. While some follicles are instructed to ovulate, others receive signals from the ovary to stay dormant or to mature.

Compared, then, to the 3-D printed scaffold, the ovary has “a lot more sophisticated architecture when it comes to varying pore sizes and pore shapes,” said Shah, hoping to replicate this in the bioprosthetic ovary, thus creating version 2.

Dr. Anthony Atala, the director of the Wake Forest Institute for Regenerative Medicine, said the nice thing about the new study is that the researchers proved their 3-D printed bioprosthesis could include follicles and so preserve the functionality. Atala was not involved in the new research.

For this particular organ, this has never been done before, he said, though other structures, including cartilage, muscle and bone, have been 3-D printed and implanted into patients.

“The printing gives you scalability, because you can scale a technology up instead of making them by hand, it gives you reproducibility because you can print them in the same manner every time, and it gives you precision, because it can precisely place the cells where you need them,” said Atala. “It will eventually decrease the cost of the production of these technologies because you’re automating the process.”

While it’s difficult to say how quickly these technologies can be translated for human use, Shah said they are hoping that within five years a human implant will be made, though it is not likely to be a full functioning ovary replacement right off the bat. Instead, human trials might begin with a structure that substitutes for just the hormone production function of an ovary.

Future dreams, though, include making a durable transplant for pediatric cancer patients. Before beginning cancer treatment, these young patients would first undergo a separate procedure to that end.

Young patients need “to have ovarian function to go through puberty and to have long-term endocrine health not only for fertility but also for the estrogens which are important for bone health and cardiovascular health,” said Woodruff. “We would remove either one whole ovary, or biopsy an ovary, and that’s cryopreserved for that patient’s later use.”

If the whole ovary is removed, why not simply re-implant the cryopreserved organ when cancer treatments end? The problem is that the tissues surrounding the follicles contain cancer cells, said Woodruff.

“We don’t want to reintroduce that cancer to a patient,” she noted. So by removing the follicles and not transplanting the rest the ovary, and instead using a bioprosthetic ovary, “we’re hoping to minimize the likelihood of transferring disease.”

“There’s a lot of different knobs we have yet to turn in order to really make a long-lasting bioprosthetic ovary,” she said.