MANTEO, N.C. - Someone tossed a little kitten off a bridge in the Outer Banks.The kitten almost drowned until three North Carolina Department of Transportation workers took action and saved a life.

Ben Presgrave, Billy Cox and Reece Newman were out at 7 a.m. Wednesday doing an inspection on what locals call the Old Manns Harbor Bridge when they saw someone throw something out of a car and land in the water.

One-month-old Bridger Catfish Newman was found struggling, swimming in the water about a mile offshore.

The kitten was happy and healthy now but two days ago they said he wasn't looking so good.

"When we hauled him in the boat he looked like a drowned rat. His ears were laying down flat and soaked," said Cox.

"We see things come over the bridge quite a bit. We weren't really too concerned until we saw something moving in the water," said Presgrave.

They rushed over in their boat.

"It was a baby kitten that somebody had threw off the bridge. They didn't even slow down," said Newman, "How could somebody do this?"

"All you heard me say was is it alive? Is it alive?", said Presgrave.

Cox scooped him out of the water.

"He was pretty exhausted by the time that we got there," said Cox, "We dried him off and then we are all happy because we all kind of felt like he was gonna be all right."

"He needed help in the worst way," said Newman.

He was in good shape despite the fall, suffering a just a scrape on his nose.

Newman took the kitten to the vet, paid $215 out of his pocket, and adopted little survivor.

"He lives in Manteo with me and my wife and he's part of the family," said Newman.

They don't know who threw the kitten off the bridge but said they are glad he now has a loving home. 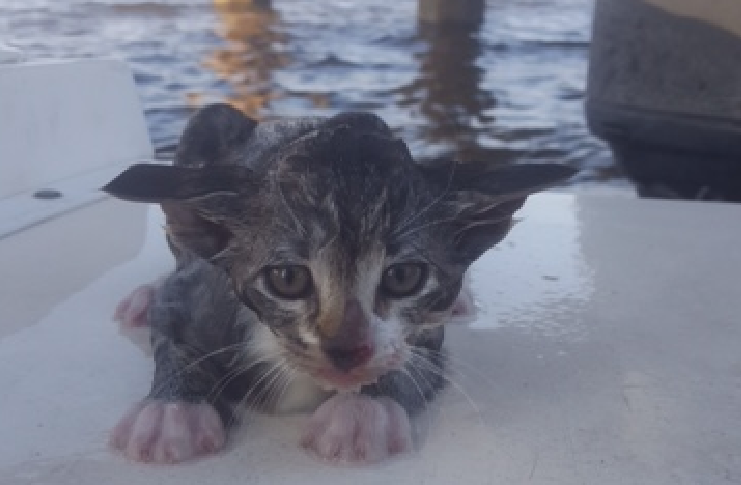