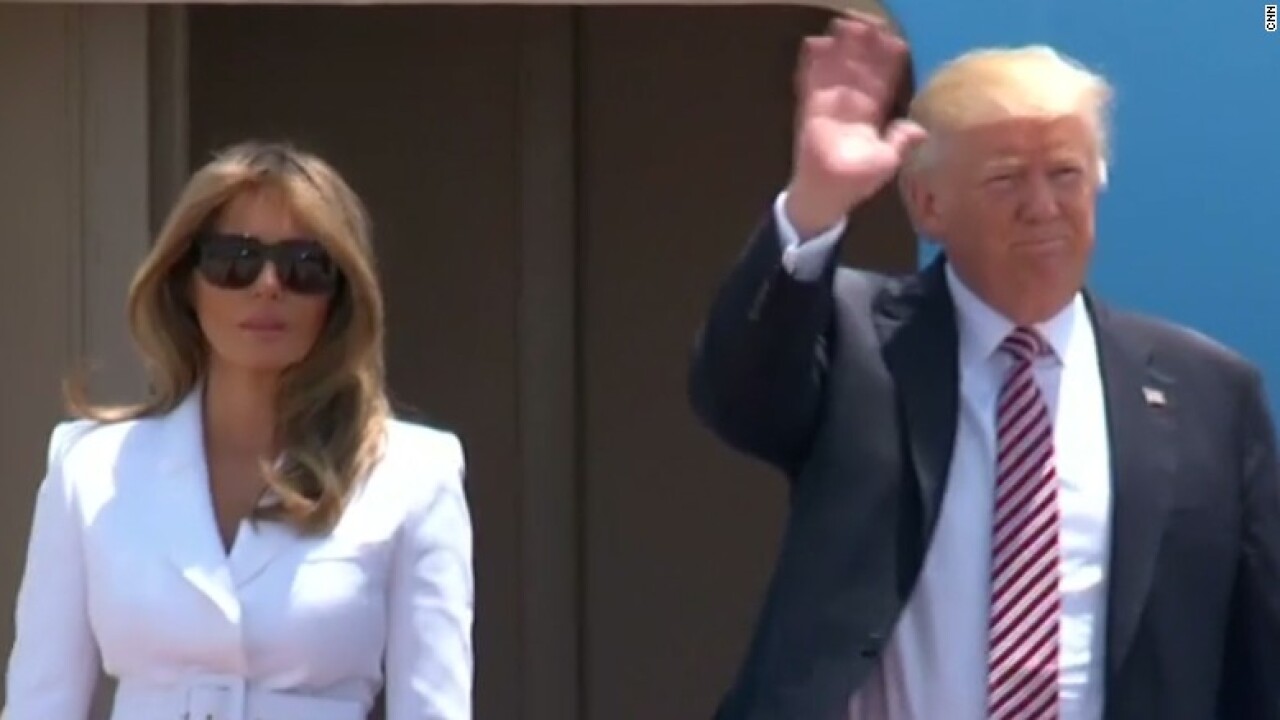 President Donald Trump landed in Israel on Monday for the second leg of his first foreign trip as president where he will tackle the Israeli-Palestinian peace process, address regional security issues and reaffirm the US’ commitment to its alliance with Israel.

The visit is the second of three stops on the President’s schedule aimed at highlighting the importance of the world’s three largest monotheistic religions. He arrived in Israel after visiting Saudi Arabia, home to the two holiest sites in Islam, and will next head to the Vatican, home of the Catholic Church.

“Young Israeli and Palestinian children deserve to grow up in safety, and to follow their dreams free from the violence that has destroyed so many lives,” said Trump, in remarks alongside Israeli President Reuven Rivlin in Jerusalem on Monday.

“Thank both you and Prime Minister (Benjamin) Netanyahu for your commitment to achieving peace between Israelis and Palestinians,” Trump told Rivlin. “I also look forward to discussing the peace process with Palestinian President Mahmoud Abbas.”

After landing in Tel Aviv, Trump will head to Jerusalem for a series of meetings, speeches and symbolic visits.

But who will be there to greet him?

Netanyahu has demanded his government ministers attend Trump’s arrival ceremony Monday morning after several of them said they were going to give it a pass, one of the ministers’ offices said.

The office source, who spoke on condition of anonymity because of the sensitivity of the visit, told CNN that a number of ministers intended to skip the ceremony at Tel Aviv’s Ben Gurion International Airport because it is expected to be brief, and Trump is only expected to shake the hands of Netanyahu and Rivlin.

When Netanyahu realized the number of expected ministerial no-shows, however, he made attendance mandatory, the minister’s office told CNN.

This is the unexpected cloud that may hang over Trump’s visit. It comes a week after the US alliance with Israel was put to the test amid reports that Trump divulged highly classified intelligence obtained by the Israelis during his meeting with the Russian foreign minister.

The US-Israeli intelligence cooperation agreement is one of the most significant relationships in the world and Trump’s decision to reveal information the Israelis did not want shared could make for tension during Trump’s visit.

Neither the US nor Israel have confirmed the source of the intelligence was indeed Israel, as widely reported, but the Israelis have publicly refuted any talk of friction in the relationship. Israeli Ambassador to Washington Ron Dermer reaffirmed Israel’s “full confidence in our intelligence sharing relationship” after the bombshell revelation.

Asked if Trump planned to apologize for sharing the Israeli intelligence, Secretary of State Rex Tillerson said Monday aboard Air Force One en route to Tel Aviv: “I don’t know that there’s anything to apologize for.”

“To the extent the Israelis have any questions, or clarification, I’m sure we’re happy to provide that,” Tillerson said.

The Israeli-Palestinian conflict will be at the top of the President’s agenda as he meets with leaders from both sides. Trump, for his part, has ramped up expectations, expressing his optimism that a peace deal can finally be brokered to end the nearly 70-year-old conflict and even suggesting a resolution may not be so difficult to obtain after all.

“It is something that I think is, frankly, maybe, not as difficult as people have thought over the years,” Trump said last month during a meeting with Abbas.

Trump and his advisers have made reviving peace talks between the Israelis and Palestinians a top foreign policy priority and the US president will be looking to demonstrate some progress toward that goal on the other end of the trip.

Trump has pitched himself as a “mediator, an arbitrator or a facilitator” to help both sides to reach a lasting peace settlement and has resisted laying out specific conditions for a peace deal.

Trump shocked longtime observers of the Israeli-Palestinian peace process earlier this year when he declined to endorse a two-state solution to the conflict, breaking with stated US policy under his past two predecessors Presidents George W. Bush and Barack Obama.

Tillerson said the administration believes that the increasing threat of Islamist extremism is proving to be a unifying force.

“That is unifying,” Tillerson said. “That there’s something larger going on that’s affecting all of us. We need to try and come together to address that. I think that creates a different dynamic.”

“I’d like to see you hold back on settlements for a little bit,” Trump told Netanyahu at the White House in February.

Trump’s remark during that news conference is the clearest statement of policy on the issue from the administration to date. And it leaves open a slew of questions that Trump may be pressed to address while he is in Israel and in the West Bank.

Trump did not specify whether the US is urging Israel to halt only new settlement activity, or even construction to expand existing settlements. And he also hasn’t said whether his request to halt settlement activity — already more modestly stated than past presidents — applies to East Jerusalem.

Tillerson on Monday declined to say whether Trump would pressure the Israelis on settlements, simply promising that “settlements are part of the overall peace discussion.”

“There are a number of elements that have presented challenges to the peace process in the past, settlements is clearly one of those,” he said.

Trump was considering recognizing Jerusalem as Israel’s capital and announcing plans to relocate the US embassy to Jerusalem from Tel Aviv during his trip.

But he faced a mountain of pressure not to do that in recent weeks from foreign policy officials at the State Department, Pentagon and in the intelligence community, as well as from Arab diplomats. They all warned that the move would inflame tensions in the region and add an obstacle to peace talks before they even got off the starting block.

Administration officials told CNN last week that Trump would not announce the embassy move during the trip, but did not rule out making the declaration in the future.

Trump will be the first sitting US president to visit the Western Wall, the holiest site in Judaism.

But Trump is currently scheduled to visit the site without Israeli officials by his side — with US officials keenly aware of the sensitivities surrounding the holy site, which both Israelis and Palestinians claim as part of their territory.

The US has left the status of Jerusalem as a whole to a final status peace settlement.

But Trump’s visit to the wall comes after US officials who met with Israeli officials to arrange Trump’s visit sparked off a controversy by contending that the Western Wall was part of the West Bank — which is not the US’ policy.

White House press secretary Sean Spicer would only say the West Wall is in Jerusalem, without clarifying whether the administration believes the Western Wall is in Israel.

Tillerson on Monday also would only say: “The wall is part of Jerusalem.”

Still, Trump’s visit to the wall will be a symbolic statement about the Jewish people’s connection to Israel, and Jerusalem in particular.

Trump has talked a lot about the importance of walls and as he makes his way to the West Bank city of Bethlehem to meet with Abbas, Trump will confront one perhaps even more controversial than the one he has vowed to build on the US-Mexico border.

The barrier separating Israel from the West Bank has been a years-long source of tension between Israel and the Palestinians. While Israeli officials contend the barrier, built during the suicide bombings of the Second Intifada, is a crucial security measure to prevent terrorist attacks, Palestinians have protested it for its impact on economic activity and because its route has, at times, cut into land the Palestinians claim as their own.

The portion of the barrier that sits on the edge of Bethlehem is particularly visible — a 30-foot-high wall with political graffiti art adorning its concrete slabs. Palestinians call this “the apartheid wall.”