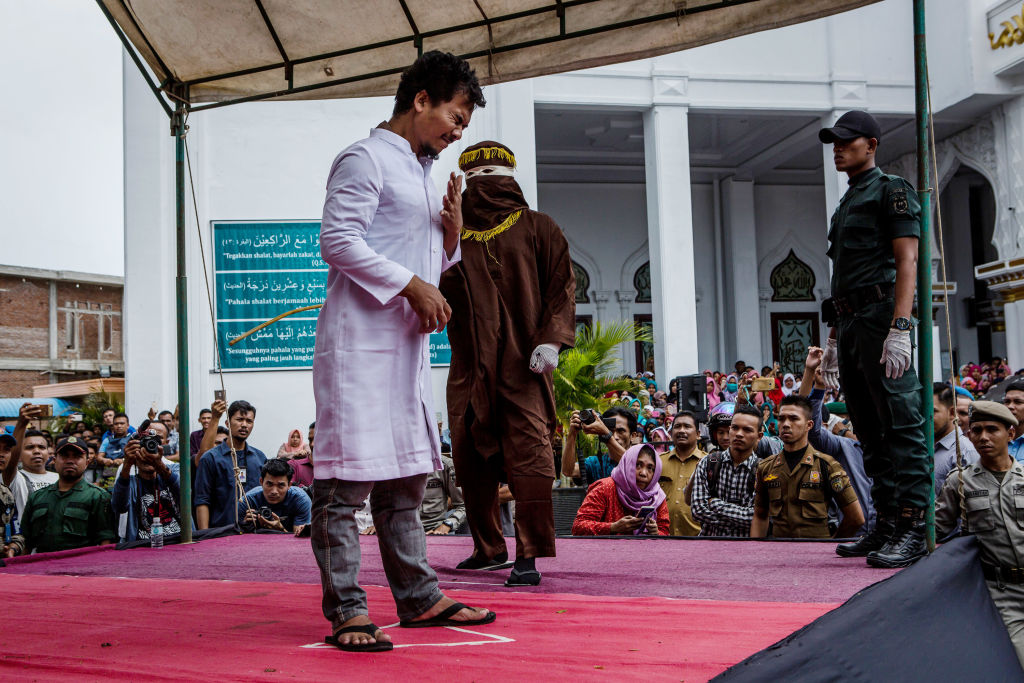 Two men were caned 83 times Tuesday as a punishment for having homosexual sex in Indonesia’s ultra-conservative Aceh province.

Hundreds of people turned out to see the public punishment, held at a mosque in Banda Aceh, the capital of Aceh province, filming the caning on their phone cameras. It is very rare, even in Aceh, which follows strict Islamic law, for two men to be caned for having sexual relations.

The men, aged 20 and 23, were arrested in March by vigilantes. Neighbors had barged into an apartment with the men and filmed them naked with camera phones, according to rights groups. The videos were shared widely in local media.

They were subsequently found guilty of violating Aceh’s strict Islamic laws and were sentenced to 85 lashes. On Tuesday, two lashes were taken off because the men had already served two months in prison.

The punishment site was under tight security. The young men were caned alongside four other couples, who had been found guilty of being intimate outside of marriage.

Unlike the rest of Indonesia, Aceh follows strict Islamic laws, which make sexual activity outside marriage and same-sex relations illegal.

During sentencing, Khairil Jamal, the lead judge, said both defendants were clearly guilty.

“No evidence was found to justify and forgive them. Therefore, they shall be punished according,” he said.

“These young men are two Indonesians who wanted nothing more than to live their lives and have their privacy respected,” Kyle Knight from Human Rights Watch wrote about the case last week.

The public punishment comes just days after more than a hundred men were arrested at a gym and sauna in North Jakarta, accused of participating in a gay sex party.

“So much fear, I meet them almost every day, if not every other day. I’ve been helping many of them to escape arrest or to deal with abuses, give them counseling,” he said.