Two very depressing charts about the future of newspapers 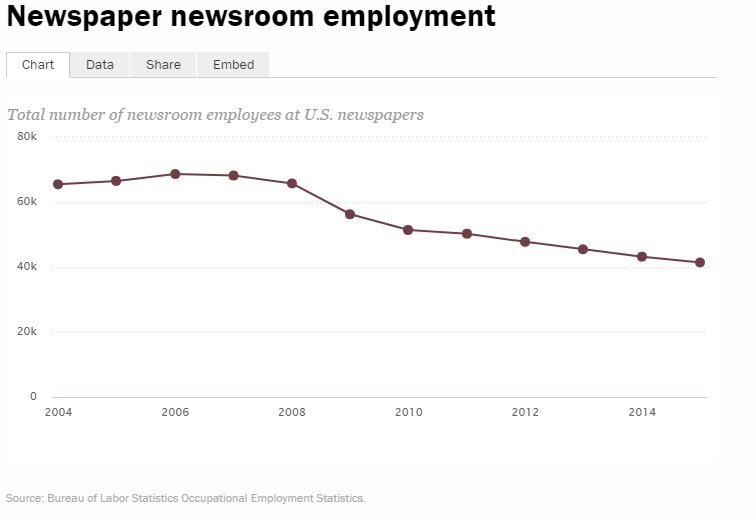 Newspapers have never been hotter.

The Washington Post and the New York Times are regularly breaking massive stories about the Trump administration, fueling a sort of newspaper war — the good kind! — the likes of which we haven’t witnessed in decades.

But, according to Pew’s new study on the state of the media industry — they’ve conducted an annual review since 2004 — beneath the buzz are the hard realities of an industry in the midst of a sea change that is disproportionately impacting newspapers.

The story is stark — and can be told in just 2 charts.

The first is this one, documenting newspaper circulation from 1940-2016.

Weekday circulation has dropped to 34.7 million, the lowest it’s been in more than 70 years. The Sunday paper, long seen as the saving grace for newspapers, has seen a similar drop — down to a circulation of 37.8 million in 2016. The only time it was lower than that was in 1940 when circulation stood at 32 million.

And, if you look at the trend line since 1990 — the peak of newspaper circulation — it’s hard to see it reversing itself.

The second chart details the staffing at newspapers — and it’s even more depressing that the circulation numbers.

That impact has been felt most deeply in state and local newspapers. While places like the Washington Post — under the guidance of billionaire Jeff Bezos — have prospered, the economics of keeping a full staff at many smaller newspapers have become untenable.

Less people covering the news + less people reading what it written = bad news for newspapers and for the public.