London, England — A man arrested after a van plowed into a crowd of worshippers near a mosque in north London is now being held on suspicion of terrorism offenses, police say.

A man died and 10 people were injured in the assault, the latest in a series of terror attacks to hit the UK this year.

The 47-year-old white man was wrestled to the ground by members of the public and then arrested at the scene, officials said.

The driver is being named as Darren Osbourne, 47, a resident of Cardiff in Wales.

British Prime Minister Theresa May said the attack was directed at Muslims and condemned it as “every bit as sickening” as deadly Islamist attacks that hit the country in recent months.

— Police say they believe there was only one man in the van.

— Searches are being carried out at a home around Cardiff, Wales.

— The suspect was not “on the security services'” radar, Home Office Minister of Security Ben Wallace said.

— An imam stopped the crowd from hitting and kicking the attacker.

— Eight people were hospitalized, all Muslim.

— The van appears to be a vehicle rented from a company in Wales.

Osbourne was first arrested for attempted murder and taken to a south London police station. Police later said he was also further arrested for the commission, preparation or instigation of terrorism, including murder.

The van plowed into the worshippers on Seven Sisters Road, a busy thoroughfare in Finsbury Park, north London, near a Muslim community center and a mosque.

Neil Basu, senior national coordinator for terrorism at the Metropolitan Police, confirmed witness accounts that the man found dead at the scene was already receiving first aid when the attack happened. He said it was unclear whether he died as a result of the attack.

Police believed the attacker acted alone, despite earlier reports from witnesses, who had said they saw two other people flee the scene.

Muslim Welfare House CEO Toufik Kacimi said the attacker shouted “I did my bit, you deserve it.” An imam prevented people from taking revenge on the man, he said.

Speaking at Downing Street, May said police decided to treat the incident as a terror attack within eight minutes of receiving the first emergency call. Residents in Finsbury Park had criticized authorities for not declaring the incident as terrorism soon enough, and police only announced they were treating it as terror more than eight hours after the event.

“This was an attack on Muslims near their place of worship and, like all terrorism in whatever form, it shares the same fundamental goal. It seeks to drive us apart and to break the precious bonds of solidarity and citizenship which we share in this country,” May said.

“We will not let this happen.”

The assault comes on the heels of another attack at London Bridge, in which three men rammed a van into pedestrians and went on a stabbing spree at nearby bars and restaurants, killing eight people. Monday’s attack is the third in London since March involving a vehicle as a weapon against pedestrians.

Emotions are high in the UK in the wake of a series of deadly terrorist attacks and a fire at a London apartment building that killed dozens. Basu said it was a “challenging” time for London and that the emergency services were stretched.

Witnesses told CNN they saw a van driving at high speed along Seven Sisters Road after worshippers had attended late-night prayers at the Finsbury Park Mosque.

Abdikadir Warfa said the van turned into an alleyway and hit a number of people before coming to a stop. Images from the scene show a white van wedged against a traffic barrier at the dead end of a street.

“I saw a man, he was underneath the van,” Warfa said, who described how his friends tried to lift the van to free him.

He said as he attended the injured, others grappled with the driver as he tried to run away.

Ratib Al-Sulaman was sitting two minutes away when the incident occurred.

“Some big van … crushing the people in the mosque. So we just run straight away, I see police, ambulance, people lying on the floor, and a van as well,” said Sulaman.

Both Warfa and Sulaman said there were three people originally in the van, and that two had run away. Police say they are investigating these reports but believe that only one person carried out the attack.

Saeed Hashi described how he fought with the driver, and how he and two others held him to the ground for 10 minutes as they waited for police to arrive.

“He punched me in the head,” Hashi said, showing his bruises.

Police have not named the man arrested, but the van bears the logo and phone number for Pontyclun Van Hire in south Wales. CNN spoke to a man at the company, who said he was the owner but declined to give his name. He said police had instructed him not to speak to the media.

Finsbury Park Mosque trustee Mohammed Kozbar met with interfaith leaders and said that an attack on one faith was an attack on all.

“Those who try to divide us and who aim to spread hate, fear and division will not succeed,” Kozbar said following a minute’s silence near the scene of the attack.

A statement released by the Muslim Council of Britain (MCB) condemned what it described as a “terror attack.”

Tell MAMA, an anti-Islamophobia group, had visited Muslim Welfare House on Friday last week to inform the community about the need to report anti-Muslim hate incidents and to consider their safety during Ramadan.

Finsbury Park, in the London Borough of Islington, is a bustling, diverse area of north London with a strong Muslim community.

On May 22, a suicide attack killed 22 people and injured nearly 60 after an Ariana Grande concert in Manchester. The attacker was motivated by Islamist extremism, police said.

The London Bridge attack was on June 3. That attack also appeared inspired by Islamist extremism. 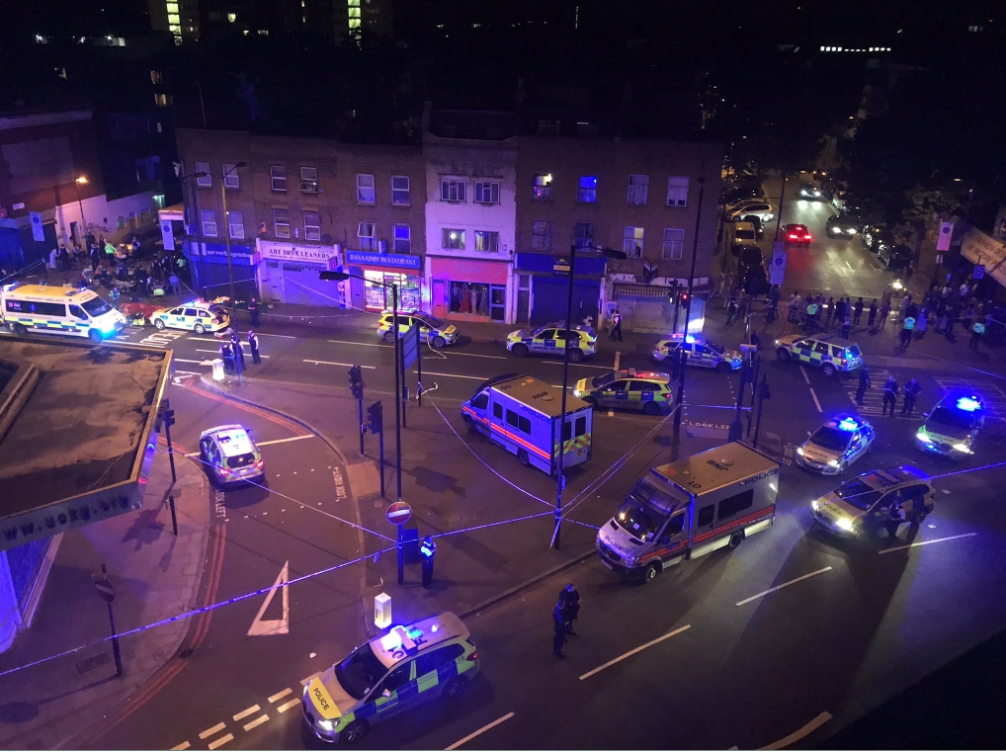