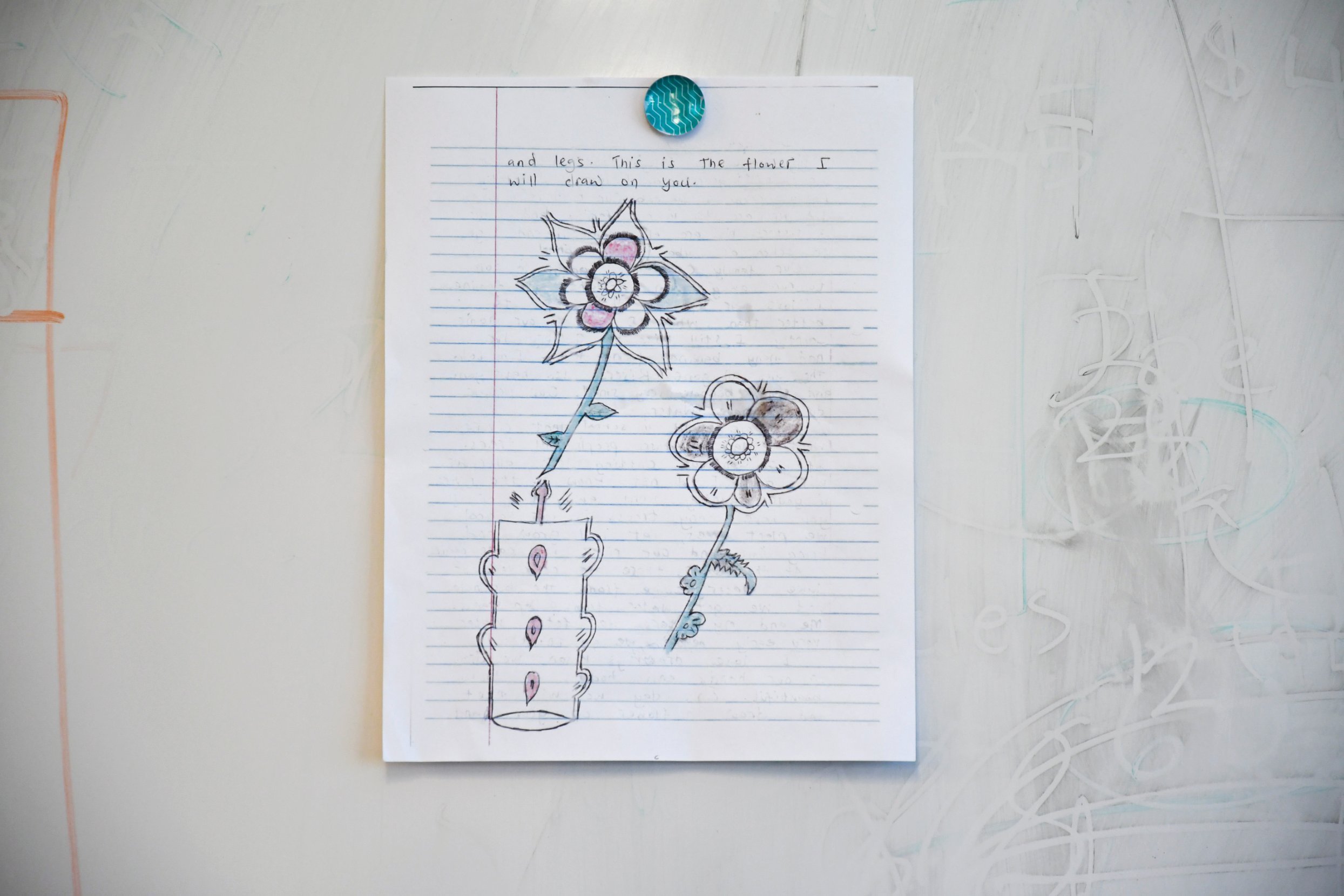 The flower was intricately drawn, with each pattern nesting delicately inside another. Pink and white petals sprouted from a blue stem. It stretched across the back of the lined paper next to a smaller, similar flower.

“This is the flower I will draw on you,” the caption read.

Safiyo Noor Hassan, an 11-year-old Somali refugee living Kenya’s Dadaab refugee camp, doesn’t have much in common with the 11-year-old American kids in Boulder, Colorado, she was writing to. But if there’s one universal thing kids their age love, it’s drawing.

“When we draw on our hands and body, we look beautiful,” Safiyo wrote. “One day, we will meet, and I will draw a flower on your hands and legs.”

The fifth graders at Boulder’s Valley Peaks Elementary who received Safiyo’s letter used temporary tattoos of her illustration and placed them on their arms and legs — just as Safiyo imagined. They snapped pictures to send back to her in Kenya.

The kids may never get a chance to meet. But the flower has become a powerful connection between a girl in the world’s largest refugee camp and a class of children her age halfway across the world.

This is precisely what CARE’s Letters of Hope wants to accomplish: to let refugee children around the world know that America hasn’t forgotten them.

After President Donald Trump proposed his ban on admitting refugees into the country, the Atlanta-based international aid organization received queries from several schools wanting to know what they could do.

“There was this surge of support amongst the American public of wanting to say that we support refugees, that we stand with them, and it just seems to be a movement that seems to be continuing,” CARE emergency communications manager Holly Frew told CNN.

Among them was Zack Fink’s fifth-grade class at Valley Peaks. Several students suggested attending marches or rallies, which wasn’t a realistic response as a class.

But when one student brought up the idea of writing letters to the refugees targeted in the ban, Fink started exploring ways to make it happen.

“The compassion and empathy and tolerance for others was really inspiring,” Fink said.

Fink said he was expecting at least some pushback from parents. He made it clear the letter-writing activity was optional and parents could pull their kids out if they weren’t comfortable.

Every single parent opted in.

And that’s where the flower came in.

The world’s attention may be focused on Europe’s migrant crisis or the unending civil war in Syria. But there are about 22.5 million refugees around the world, and roughly two-thirds of them are from conflicts the world has forgotten. Many live in limbo in dilapidated and overcrowded camps.

Among them are the 250,000 residents in Dadaab, whose homes are tents in patches of desert, battered by winds that whip up the occasional violent dust storm. They’re men, women and children — like Safiyo — who stream in from Somalia on buses, donkey carts and foot — fleeing famine and war.

There’s a reason CARE picked refugee children in places like Dadaab for Letters of Hope.

“We wanted to highlight other crises that are underreported,” Frew said.

CARE delivered letters from the refugees first, including Safiyo’s. Students then wrote back, either directly to the letter-writer or more generically to a different, unknown refugee in the camp.

One of the kids Fink’s class, Blake Mechels, wrote to a 12-year-old South Sudanese refugee named Elisa Elisama Mangu. The two connected over their shared love of music.

“His dream, which I thought was really cool, was to complete university and serve the world and help others,” Blake told CNN.

The Boulder kids noticed a similar pattern in the letters: When the refugees would write about what they wanted to be when they grew up, they all wanted to do something to help humanity, like becoming doctors or aid workers.

“There’s so many people in the world who don’t have as much things as I do, and despite that they still want to learn and help other people,” Blake said.

Two other American schools have taken part in Letters of Hope so far, writing to Somali refugees not just in Kenya but Afghans in Greece and Yemenis displaced internally.

Celia Ghezzi, a 10-year-old student in Atlanta, received a letter with a poem from a 16-year-old South Sudanese refugee in Uganda. The poem included the lines, “This is my year to grow,” and “I’m going to make it.”

Ultimately, the letters taught the American students about how they can make a difference, too.

“We as a class decided our objective was to show them that we love them and we care and we’re not afraid,” Fink said.

“In the end, I think we learned something else, which is you have a voice. These are 11-year-old kids, and they’re influencing lives in Africa. The biggest thing besides the love and relationships was learning that they have a voice.”

Which brings us back to Safiyo’s flower.

Fifth-grader Dexy Payne’s correspondence with Safiyo began with the basics about life in the US: food, art classes in school, what snow looks like.

“We’re all people too, it doesn’t matter where you live or what situation you’re in,” Dexy told CNN. “They all still love soccer, they’re just kids, they all go to school, they have friends, they have parents. We’re all the same.”

The letter with the flower — and the temporary tattoos it inspired — has added a different layer.

“We got to all put them on, and it was so cool because it really was this connection, drawing as a universal language,” Fink said. “Many of the kids wore them for days, weeks.”

Dexy sent Safiyo back a letter with the photos of them sporting tattoos.

He finished his reply with a drawing of a bright, yellow sun.

“Everyone sees the sun. I do too!,” he wrote. “The sun brings us all together.”

He’s waiting for her reply.