Five friends from Santa Barbara High School have been snapping the same photo in the same pose on the same cabin bench every five years for the past 35 years.

From left to right, as is the tradition, John “Wedge” Wardlaw, Mark Rumer-Cleary, Dallas Burney, John Molony and John Dickson gazed at the camera on Saturday in the remote serenity of Copco Lake on the California-Oregon border to capture their eighth entry into the photo collection that took the Internet by storm five years ago.

Wardlaw, who snapped the photo, believes it’s one of their best. “I used a Nikon D800 and video and think we came the closest we ever have to the original photo,” he said.

In the years that have passed since their last shot in 2012, the five have checked some empty boxes in their personal columns.

Three of the five, Rumer-Cleary, Burney and Dickson, got married, and there’s finally a child descending from the quintet.

“It’s been great. I wanted to become a father for a long time,” said Dickson, who entered parenthood at 51 after getting married for the first time at 49.

Dickson, now 54, and his wife, Sharon, celebrated the birth of son Jimmy two years ago. Someday Jimmy may play a role in the longstanding photo tradition, but we’re getting a little ahead of this fishing tale. 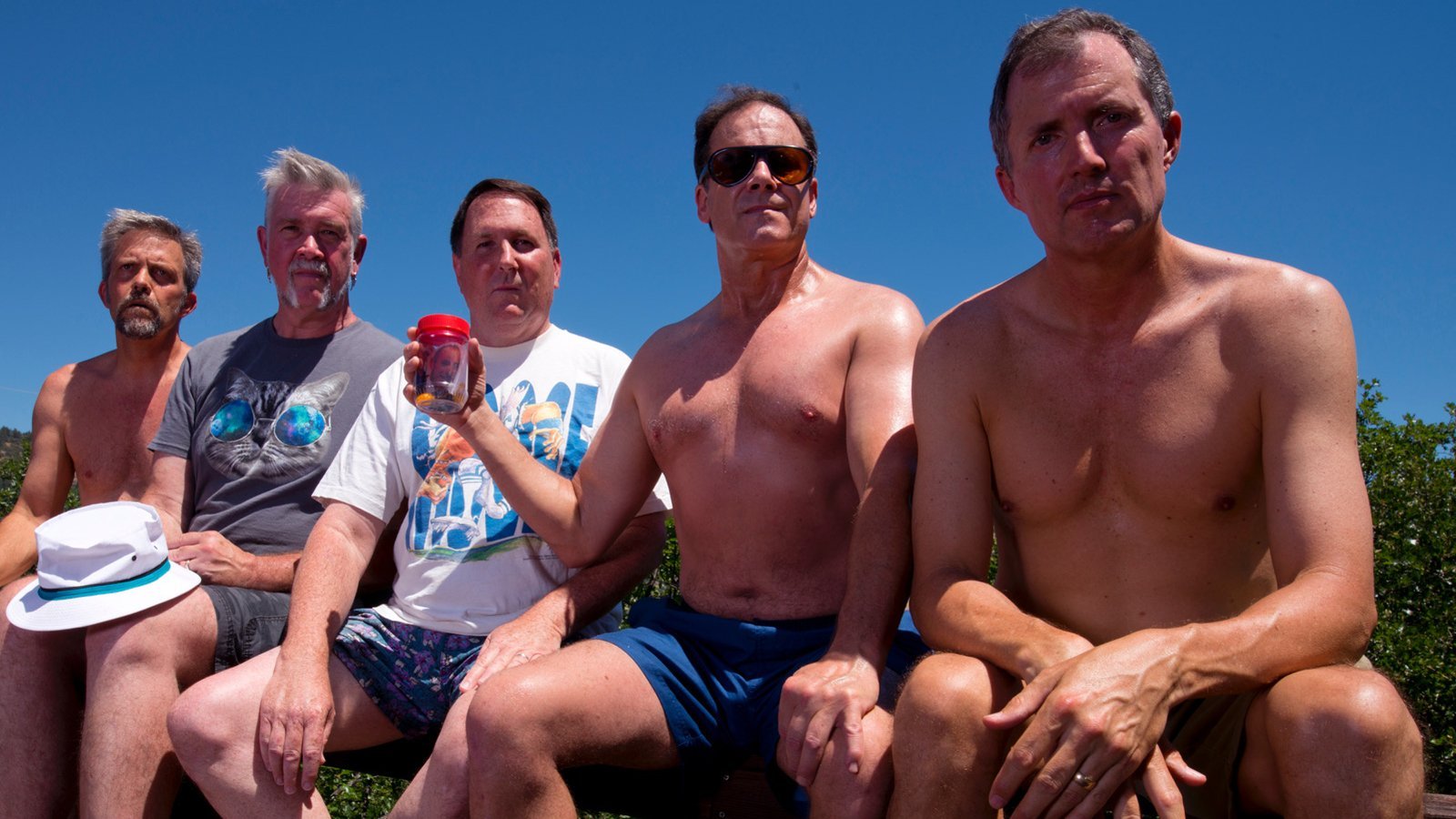 The Copco Lake five went from laid-back dudes sitting on a deck to Internet stars five years ago when CNN’s story on the friends went viral, turning them into a global sensation.

“It was totally unexpected and we were in shock, because our photos went everywhere,” Dickson said. “I had a friend in Sweden let me know we were on the front page of his newspaper.”

“We got a lot of emails from people who wrote they couldn’t believe we stayed friends that long,” he said.

They appeared on morning network television shows and were interviewed by TV, print and radio stations from all around the world, all because their photo reunions seem to have struck a chord.

At the lake, the friends stay in a prefabricated Lindal Cedar Home built in 1970 by John Laux, Wardlaw’s grandfather. They call it the cabin; the three bedrooms, loft and basement a throwback to the boys who go way back.

Wardlaw, 54, and Dickson formed a friendship in middle school, out of tragedy.

As the Wardlaw family attended “Star Wars” in downtown Santa Barbara, California, on July 26, 1977, the Sycamore Fire exploded in the foothills when a kite became entangled in power lines.

The ferocious blaze burned down 250 homes, including Wardlaw’s house.

“We rented a house from the Dickson family, right next door to them,” Wardlaw said. “John and I became friends.”

The neighbor boys became obsessed with making Super 8 movies, with all manner of testosterone on film: combat war sagas, some science fiction mixed in, a ninja tale or two.

“We had a mutual interest,” recalled Dickson. “We made dozens of these Super 8 movies including some later at Copco Lake. All five of us friends have been in them at some point.”

The two became friends with the others in high school. The Super 8 movies “kept us out of teenage trouble,” said Burney, 54. “Even though many of us moved on to college, or the US Air Force in my case, we always continued to find time to do the movies.”

Rumer-Cleary, 53, said the friends have remained tight despite a few spats here and there.

“Other than two guys being irritated with each other for three months a little after high school, it was nothing lasting,” Rumer-Cleary said.

Where they are now

Wardlaw is still a filmmaker and photographer. He lives in Bend, Oregon.

Rumer-Cleary is a hardware and systems engineer who founded Occam Networks and now lives in Portland, Oregon.

Burney is a third-grade teacher living in Antioch, California.

Molony, 54, is a New Orleans-based photographer.

Only Dickson remains in Santa Barbara, where he runs tourism website santabarbara.com.

Their photo streak started in 1982 when the friends, who were about 19, headed to the cabin that Wardlaw’s grandpa built and took their first photo.

Among the rules that developed out of that first photo: Molony holds a glass in his right hand and Rumer must have a hat in his lap.

Despite lurching into their 50s, when bellies can bulge, the men decided to take this year’s photo shirtless for the first time in 30 years.

Many of them have been working out to avoid being fat shamed, but not Rumer-Cleary.

“Oh God no, that is much too indulgent on an ego level for me,” he said with a laugh.

But no doubt the new photo will be analyzed, and last time some of the dissection felt like anti-social media.

“I couldn’t believe the amount of reactions (in 2012) to our picture,” Molony said. “About 75% of the responses were glowing and loving, but some of it was visceral hate.”

Traditions past and future

Just like the first trip, they still crank up the stereo and listen to heavy doses of Rush and Pink Floyd.

“During that first trip I don’t think any of us drank alcohol the whole time, except one thing,” Wardlaw remembered.

“My grandpa liked bourbon and after he died in 1976 there was and still is an Ezra Brooks 1969 Arkansas Razorback decanter that still had a little whiskey left. Some of us passed it around and took some sips.”

In honor of Grandpa, 14 Razorback decanters now decorate the cabin.

Like the decanter, grandpa passed along a love of the lake and the cabin.

Dickson vows he’ll pass on the Copco photo tradition to 2-year-old Jimmy, now that there’s an heir to the bench.