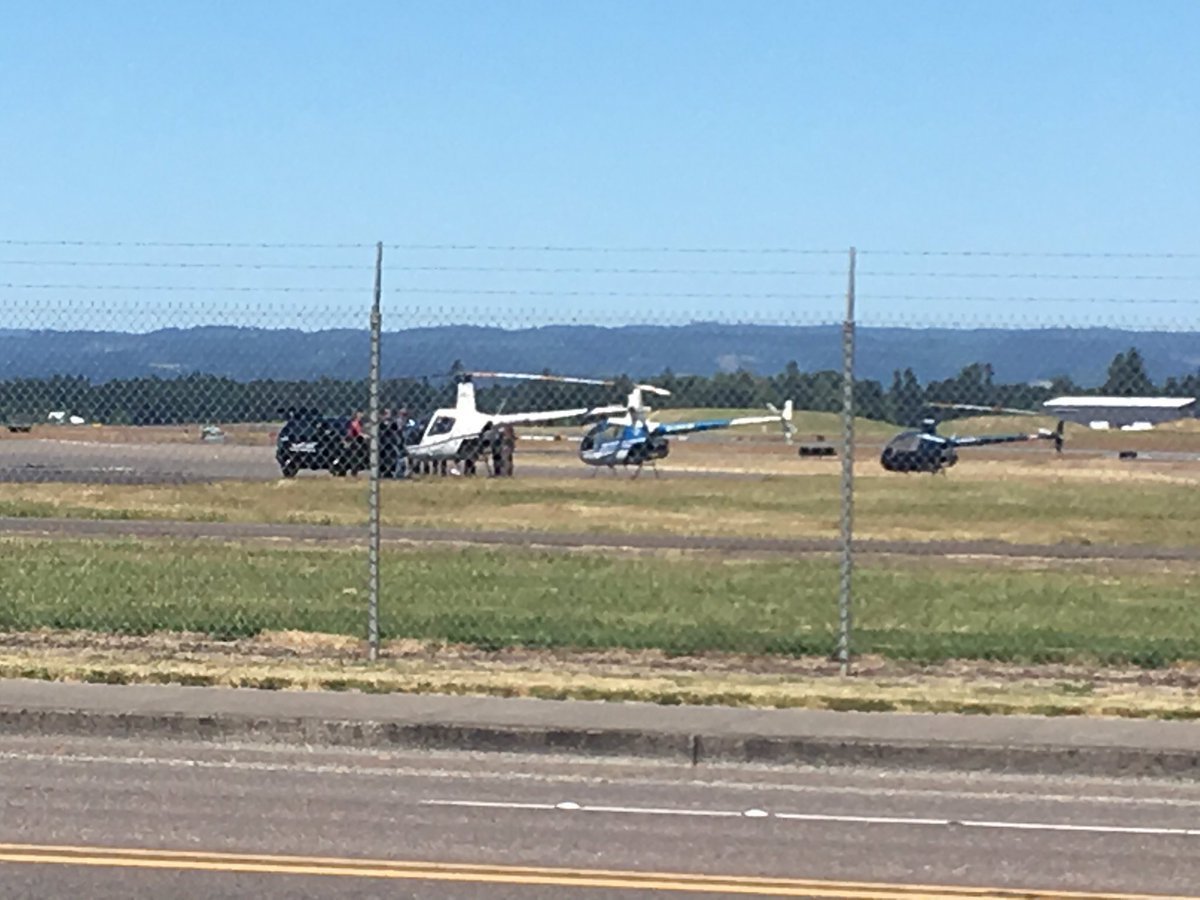 Police in Oregon fatally shot a man who attempted to steal a helicopter from a private air hangar at an airport near Portland, authorities said Monday.

Hillsboro Police Lt. Henry Reimann said the armed man climbed a fence at the local airport and approached the helicopter in the hanger owned by Hillsboro Aero Academy around 11:30 a.m. local time. An academy employee was showing his girlfriend the helicopter, which had the engine switched on, Reimann said.

Police had initially identified the helicopter’s occupants as a pilot and student pilot.

The suspect fired into the air and ordered the two out before climbing in to the helicopter, Reimann said. Three other academy employees then pointed weapons at suspect, Reimann said.

A Hillsboro officer who was responding to a call of an active shooter at the airport approached the hanger and ordered the suspect away from the aircraft, Reimann said. The suspect and the police exchanged gunfire as he jumped a fence and ran into a field.

Another Hillsboro officer fatally shot the man in the field near the airport, Reimann said.

The incident is not believed to be an act of terrorism, Reimann said. It was first reported to Hillsboro Police as an active shooter situation, Reimann told CNN affiliate KATU.

The officer who shot the suspect was placed on administrative leave, which is standard procedure, Reimann said.

Police are trying to use forensics to identify him the suspect, who did not have any identification on him.

A representative for Hillsboro Aero Academy could not be immediately reached.

‘The Lord above took care of us today’

Christopher Neal, director of public safety and security for the Port of Portland, told reporters he and his wife and 2-year-old son were in a nearby parking lot watching airplanes go by when he had a quick encounter with the suspect.

He saw the man, who was wearing a gray hoodie, walk across the street and onto a sidewalk, Neal said, CNN affiliate KOIN reported. The man had his hands in his pockets, and Neal said he could tell “he had something.”

“Immediately I thought that’s a little hot to have this hoodie on,” he said.

The man walked by Neal’s car and looked at the family and turned to face forward, Neal said. “That’s when he pulled the gray mask over his face,” Neal said.

Neal immediately got his 2-year-old son and wife in the car for safety.

“I watched him hop right over this fence and start to run inside,” he said. “And by that time, we had jumped in the car and we took off and I got on the phone.”

“The Lord above took care of us today. I know that because he was 10 feet from us and looked directly at us,” Neal told CNN affiliate KPTV.

The airport was being searched by authorities, authoritie said earlier. The Washington County Major Crimes Unit is handling the case.

The Federal Aviation Administration has also been notified of the situation.

The Port of Portland, which owns and operates the airport, said it is “grateful for the quick and professional response of the Hillsboro police department.” The airport resumed operations after the incident, the port said in the statement.

Hillsboro is about 16 miles northwest of Portland.