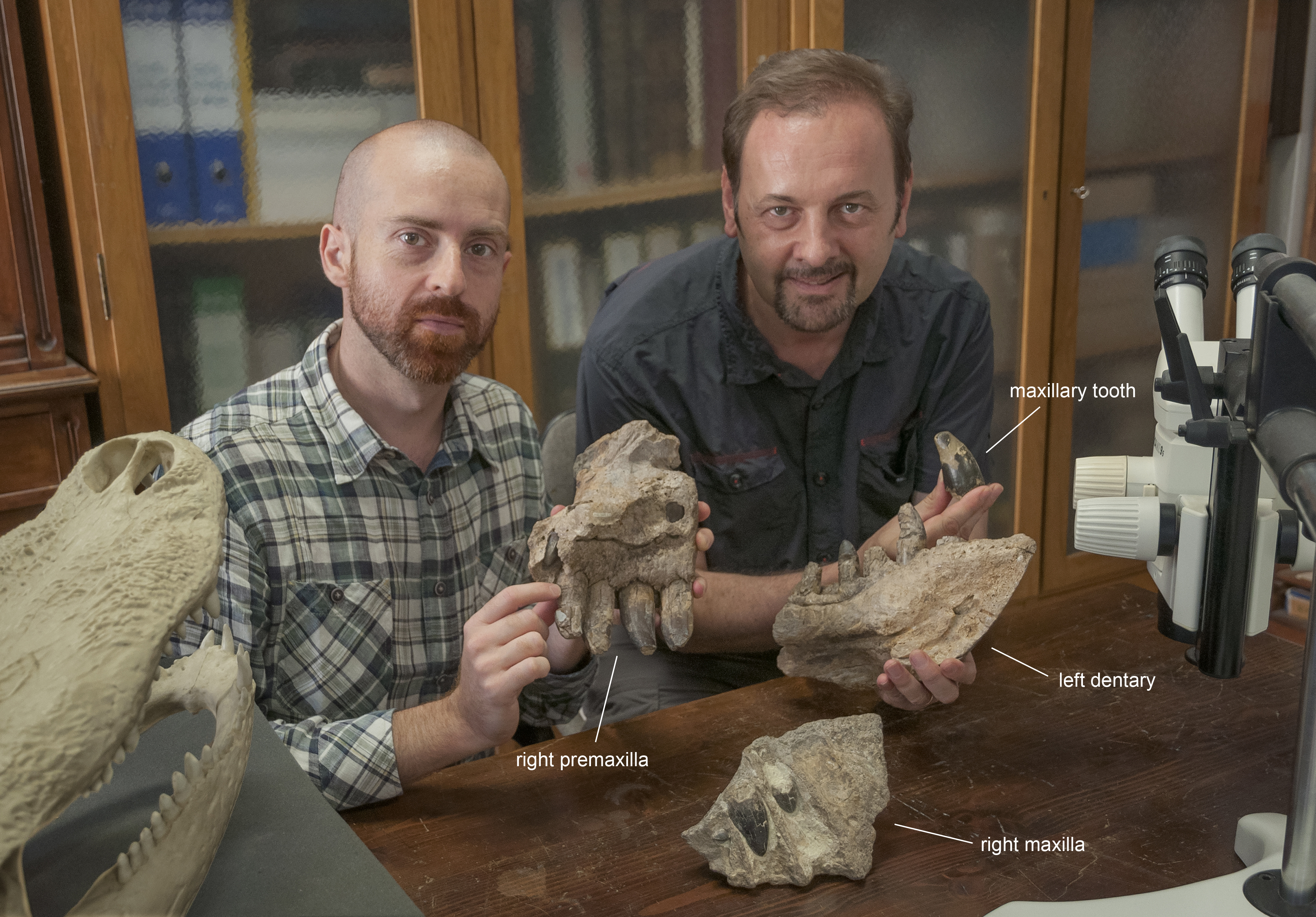 One of the top predators of the Jurassic period wasn’t a dinosaur but a bone-crushing giant crocodile with the serrated teeth of a T. rex, according to a new study in the journal PeerJ.

Razanandrongobe sakalavae, known as “Razana,” was 23 feet long and weighed between 1,760 and 2,200 pounds. Powerfully muscled, Razana had deep, massive jaws and strong teeth like fangs for crunching through tendons and bones.

Given where the fossil evidence was collected in Madagascar, Razana was at the top of the food chain 170 million years ago, during the Middle Jurassic period. This period is still poorly documented in the fossil record, the researchers said.

Based on isolated teeth and a bone fragment, the new genus and species was first described by Italian paleontologists in 2006. More cranial fossils were discovered and have enabled the paleontologists — Simone Maganuco, Cristiano Dal Sasso and Giovanni Pasini — to answer the questions from that first paper with new research.

In 2006, they didn’t know whether Razana was a dinosaur similar to Tyrannosaurus rex or an unknown relative of crocodiles. The new fossils showed key features that classify Razana as a crocodile relative, such as nostrils facing to the front of the snout, lower jaw formation and a bony palate, as well as teeth and teeth sockets that expanded sideways.

But unlike the conical teeth of modern crocodiles, Razana had serrated teeth that were even larger than those found on T. rex and other similarly sized predatory dinosaurs. Like T. rex, Razana also had some chisel-like incisor teeth in the front that could be used to scrape meat from bones.

This leads the researchers to believe that Razana was a hunter and a scavenger. Although it wouldn’t have been a fast runner, Razana would’ve been formidable at ambushing and scavenging, similar to the opportunistic behavior of today’s hyenas and lions. And while it could swim to cross rivers, Razana was built to walk on dry land, Dal Sasso said.

Razana also differs from modern crocodiles by having a deep skull and four strong, erect limbs, making it specialized to be a land predator. The crocodiles we’re familiar with have flattened skulls and are largely aquatic.

Razana is unique in that it’s the oldest and largest representative of the suborder of crocodylomorphs called Notosuchia, predating other forms like it by 42 million years.

The fossil evidence also shows one of the Jurassic period’s earlier events: a huge increase in body size within the evolutionary history of the group.

The researchers are eager to find more bones to fill out the skeleton, but excavation in these remote areas of Madagascar can be difficult to access. They also want to fill in the “ghost lineage” of this group by finding older examples from the Early Jurassic period, which were probably smaller.

“We began with isolated teeth and a bone fragment and ended up bringing back to life a one-ton, terrifying bone crusher,” Dal Sasso said.