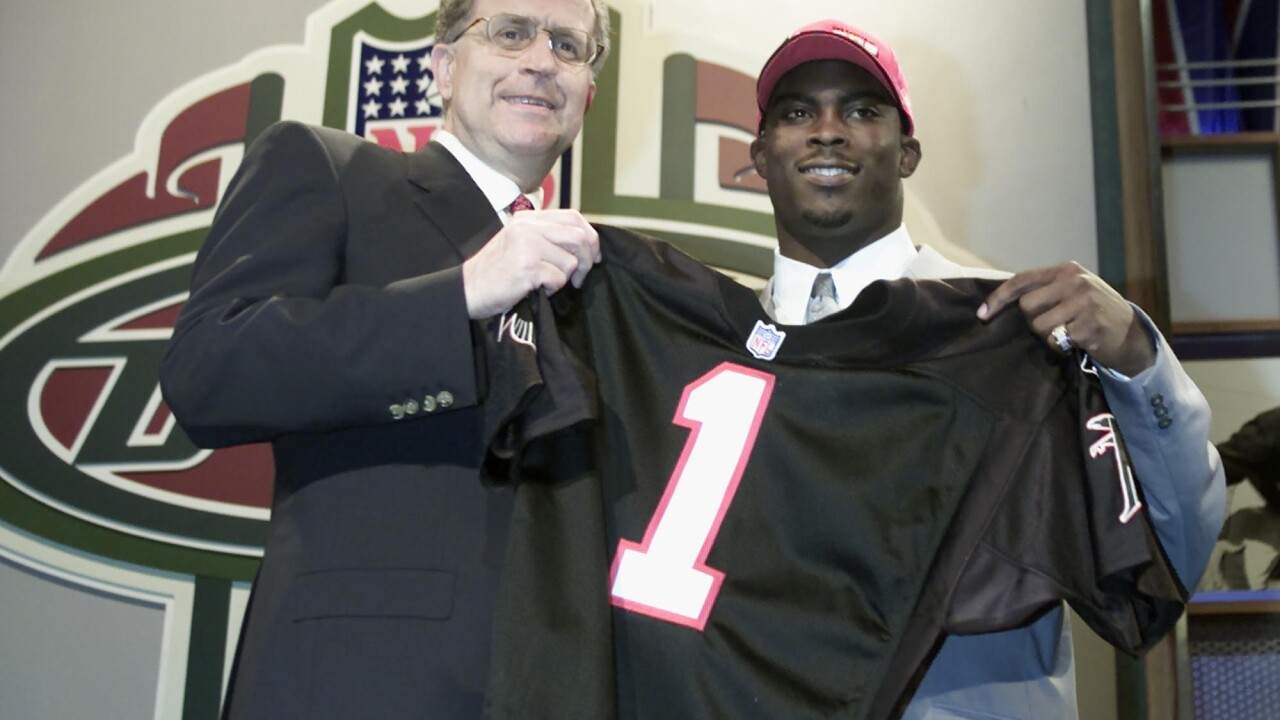 Paul Tagliebue poses with Michael Vick who was the top pick by the Atlanta Falcons. (photo by Gabe Palacio/Getty Images)

BLACKSBURG, Va. (HokieSports.com) – Newport News native Michael Vick, a quarterback who guided Virginia Tech to the 2000 national title game and brought national acclaim to the university during his career from 1998-2001, is one of five former student-athletes who will be inducted into the Virginia Tech Sports Hall of Fame later this fall.

Zabian Dowdell, a tremendous men’s basketball point guard who was the program’s first first-team All-ACC selection and scored 1,785 points in his career;

Ben Taylor, a two-time All-American as a linebacker who recorded more than 100 tackles in each of his final two seasons; and

Vick, who finished third in the 1999 Heisman Trophy voting – the top finish ever by a Tech player – and who went on to become the No. 1 overall pick in the 2001 NFL Draft.

The five new honorees will be inducted during a Hall of Fame dinner on the Tech campus on Friday, Sept. 22, the evening before Tech’s home football game against Old Dominion. The inductees will be introduced to fans at halftime of the football game. The new inductees will bring the total number enshrined to 192. The Virginia Tech Sports Hall of Fame, which is located at the south end of the Cassell Coliseum ambulatory, was established in 1982.

Maybe the greatest Virginia Tech athlete in the school’s history, Michael Vick brought unprecedented national acclaim to the football program as a quarterback during the 1999 season when, as a redshirt freshman, he guided the Hokies to a perfect 11-0 regular-season record and a spot in the national championship game.

The Newport News, Virginia native won the starting job and burst onto the scene in magnificent fashion, rushing for three touchdowns against James Madison in his first collegiate game, including one on a spectacular flip into the end zone. He closed the season by accounting for 322 yards and two touchdowns in the Hokies’ loss to Florida State in the national title game.

Vick started 10 games in 1999, missing two games with an injury, and he completed 90 of 153 (58.8) for 1,840 yards and 12 touchdowns. He also rushed for 617 yards and eight scores. He finished third in the Heisman Trophy balloting – the top finish ever by a Tech player – and he won an ESPY from ESPN as the nation’s top college football player.

Michael Vick throws against the Tennessee Titans on August 26, 2006. (Photo by Joe Murphy/NFLPhotoLibrary)

Prior to a game against LSU early in the 2002 season, the Virginia Tech Athletics Department retired Vick’s No. 7 jersey. He is one of nine former Virginia Tech football players to receive such an honor.

In February, Vick retired from the NFL, and he has been involved with the launching of the American Flag Football League in which world-class athletes join teams to play flag football in a league that founders hope to launch full time in 2018. Vick and his family currently live in Florida.