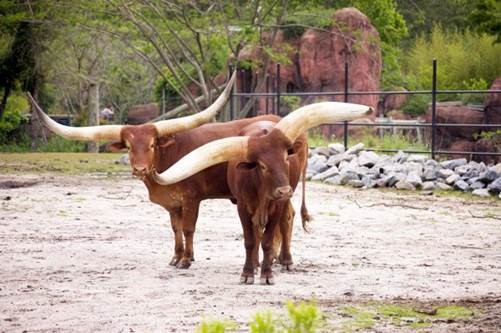 NORFOLK, Va. – One of the Virginia Zoo’s Watusi cattle has developed a medical condition.

Five-year-old Watusi cattle Diallo has developed an overproduction of mucus in one horn. The mucus causes a weight difference between his right and left horn, giving a slight tilt to his head. The cause of the condition is unknown.

Watusi cattle are resistant to drought, heat and direct sunlight because their horns act as a natural cooling system. There are special cells that help with heat exchange and air filtration.

“We have been monitoring Diallo for the past couple of months as this condition has developed,” said Dr. Colleen Clabbers, the Virginia Zoo veterinarian. “His Keepers have been giving him guaifenesin daily, also known as Mucinex, to help with the mucus,” Clabbers said.

Luckily, Dr. Clabbers says this is not a painful condition, but more of a weight imbalance between the two horns.

According to the Zoo, other institutions across the country have experienced the same issue with their Watusi cattle.

The Zoo has tried several ways to treat Diallo’s condition, including drilling a small hole in the horn to drain or suction the mucus out. However, those attempts have failed because the mucus is very thick and a maze of tissue inside the horn makes it nearly impossible to physically remove.

Zookeepers tried to apply weights to the end of the unaffected horn to counteract the weight from the mucus on the affected horn, but that was also unsuccessful.

Diallo removed the weights himself shortly after the weights were applied. Permanently attaching the weights to his horns could potentially damage his horn.

“The weights were a bit of a trial and error process.” Dr. Clabbers said. “Watusi occasionally rub their horns on different objects, so keeping the weights in place was a challenge. It’s just a matter of finding what Diallo is comfortable with and what helps him the most.”

The Zoo says visitors may see a chance in appearance to Diallo’s horns, but it will not interfere with Diallo’s daily activities.

Zookeepers are watching him to make sure he’s comfortable, and he’s been eating well and keeping up with his brother, Gamba, on exhibit.

Staff will be monitoring his condition and behavior over the next couple of months to ensure he continues to maintain a good quality of life.