PORTSMOUTH, Va. - An employee has been injured in an armed robbery at the Neighborhood Market at 52 Afton Pkwy. in Portsmouth Wednesday night.

Emergency crews received the call at approximately 9:29 p.m. and police were dispatched to the scene. The adult male employee is suffering from what appears to be a non-life threatening gunshot wound to the lower body. Medics transported him to a local hospital for treatment.

According to detectives, two suspects entered the store, approached employees and demanded money. At least one of the suspects was armed with a handgun. As the employees attempted to comply with the suspects' demands, the armed suspect shot one of the employees in the lower body. Both suspects then fled the location on foot with an undisclosed amount of cash and cigarettes.

One suspect is described as a thin black male who is between 6 and 6 feet 2 inches tall. He was last seen wearing a blue hoodie with #3 on the right shoulder, dark-colored pants, white sneakers and displaying a silver handgun.

The other suspect is described as a slightly heavier black male who is between 5 feet 10 inches and 5 feet 11 inches tall. He was last seen wearing dark-colored jeans, black headgear and a black jacket.

The shooting and robbery has another business owner getting ready to move out. "That's one of the reasons why we're closing," said Chris Paquette, the owner of a nearby hobby shop. "It's not worthy risking my safety. It's nothing worth risking my wife's safety. It's just not worth it anymore." 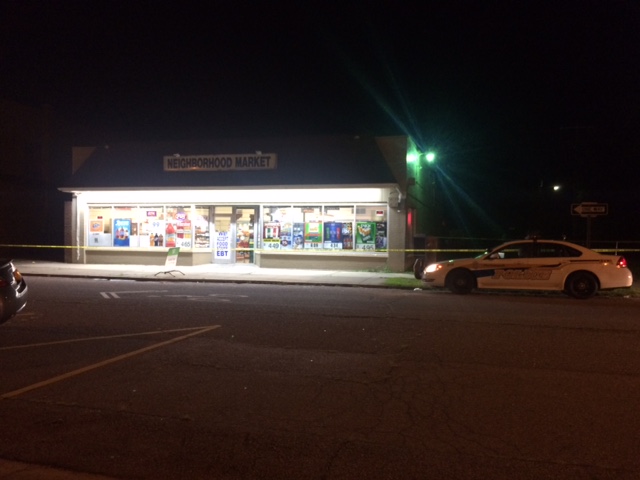