Local teen enlists in the Marine Corps, then gets call to model with top agency

VIRGINIA BEACH, Va. - A Hampton Roads teen is in the middle of two very different worlds: the Marine Corps and modeling with one of the top agencies worldwide, all thanks to a candid photo from prom.

Trevor Jones never thought of himself as a model. He moved to Virginia Beach from a small town in Ohio. His focus was on school and joining the Marine Corps.

"I would wake up in the morning, school, come home, bike down to the oceanfront to work at Harris Teeter at the grocery store and then I would come home about 11 and do my homework until 1, 2 in the morning," said Jones.

Jones said a lot of his AP classes from Ohio didn't transfer over to Virginia. Since graduating was looming over him, he enlisted in the Marine Corps because his uncle was a Marine who served in Afghanistan.

Then, shortly after enlisting, he got a call saying IMG Models wanted to sign him worldwide. Other models they represent include Gisele Bundchen, Gigi Hadid, Elsa Hosk and many more famous faces. It all started thanks to a candid prom photo.

"It was straight out of a teenage James Bond movie. We unbuttoned our jackets, threw them back, hands on the hips and just kinda posed. I made the goofiest face I could and somehow that was my discovered photo," said Jones.

Agent George Kartis is the one who saw the photo on Instagram.

“This isn’t my first rodeo. I've been doing this for a long time. I just saw a model. Everything was right," said Kartis.

They took some photos together and Kartis sent them to David Ralph at IMG Models in New York. Kartis said within minutes, Ralph had emailed and called him.

"He said, I want him worldwide. Do not show him to anybody," said Kartis.

Jones expedited his passport process and flew to Paris for a Hugo Boss casting. Upon landing, he encountered multiple challenges in Paris. The driver who was supposed to take him to the casting never arrived. Running into another model from Russia, Jones navigated the City of Lights via bus without knowing the language. Then, he sprinted for at least 10 minutes to the building where the casting was held. 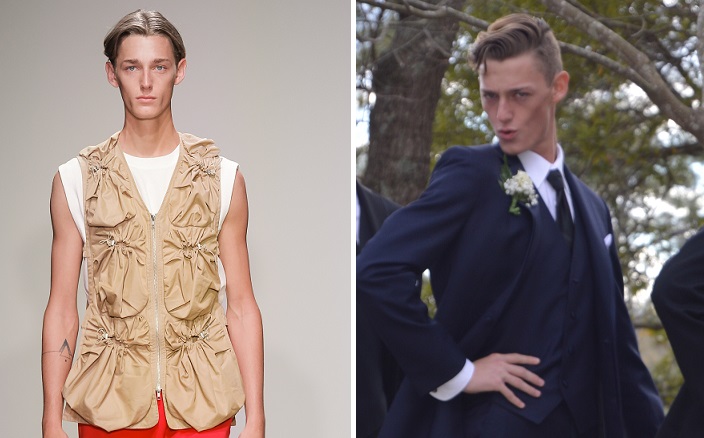 From there, he flew to New York for Men's Fashion Week, staying at the IMG Model apartment. It was his first time in New York City.

"I probably spent $19 a day on Shake Shack because the black and white shake is too good to pass up. I think it’s 960 calories. It was perfect!" exclaimed Jones, recalling his time in Manhattan.

In addition to the food and parties, Jones was getting castings for designers many models wouldn't even dream of.

"I was getting castings for Raf Simons, Calvin Klein and these were just unfathomable. I couldn't quite comprehend I was going into a job interview for such a big company," said Jones.

Despite landing all of those castings, Jones never thought he would actually get cast to walk in a show. But he did.

Feng Chen Wang saw something in him and Jones dug the clothes.

"One that really stuck with me was Feng Chen Wang, which was the show I walked for. I walked in and they had my comp card already before I had gotten there," said Jones.

His photo was featured on Vogue Runway and WWD to name a few. He told News 3's Kim Cung his nerves for the show were insane. His Uber driver didn't drop him off int he right spot, so Jones, yet again, had to sprint to the correct door. He was the last model to arrive, but he walked like a natural.

"A weight was taken off my chest, but a whole new door had opened. Instead of this being a whole bunch of castings and what if's, this became real," said Jones.

What's also real is Jones' enlistment. He's doing PT twice a week and scheduled to ship out in December.

He believes his enlistment certificate is the coolest thing he owns, despite doing a lot of other neat things.

Kartis, Jones' agent, is a little disappointed since modeling is a very short-lived career and he wants Jones to be able to make the most of it. However, he believes in Jones' work ethic.

"Whatever he chooses to do, he’ll be successful at," said Kartis,.

And that's whether that's modeling or serving as a Marine.

Before Jones ships out, he plans on going to more castings for fashion week in the Fall in New York, Paris and Milan.