Kendrick Lamar kicked off the show with a mini-medley of his songs. The fiery set included a man totally engulfed in flames. Lamar went into the evening with eight nominations, followed by Katy Perry and The Weeknd tied with five nominations each.

Perry, who also served as the night’s host, started with a video sketch about space travel that featured astronauts Buzz Aldrin and Peggy Whitson. The singer joked about the state of the world.

“Even in the apocalypse we deserve the best soundtrack,” she said, then introduced Paris Jackson, daughter of the late Michael Jackson, to present the award for best pop video.

Jackson made a statement before announcing the winner.

“Let’s leave here tonight remembering that we must show these Nazi, white supremacist jerks in Charlottesville and all over the country that as a nation with ‘liberty’ as our slogan, we have zero tolerance for their violence, their hatred and their discrimination,” she said. “We must resist.”

The best pop video award went to Fifth Harmony for “Down.”

Jackson’s remarks were just part of the political tone of the night.

“We have made my ancestor an idol of white supremacy, racism and hate,” Lee said. “As a pastor it is my moral duty to speak out against racism, America’s original sin.”

He called on “all of us with privilege and power to answer God’s call to confront racism and white supremacy head-on.”

Lee then introduced Susan Bro, mother of Heather Heyer, who was killed in Charlottesville while marching as a counter-protestor against a white supremacist rally seeking to stop the removal of the statue of General Robert E. Lee.

Bro spoke of missing her daughter and announced the launch of a foundation named in honor of Heyer.

“I want people to know Heather never marched alone,” Bro said. “She was always joined by people from every race and every background in this country.”

In that spirit, Bro said, MTV decided to honor all six of the videos nominated for the new category of best fight against the system.

Perhaps the most anticipated moment of the show arrived with the premiere of Taylor Swift’s music video for her new single “Look What You Made Me Do.”

The video was a much darker look for Swift, who appeared in it as different versions of herself, including as a zombie with snakes.

Swift isn’t the only one to have undergone a transformation.

The iconic “Moonman” trophy handed out Sunday is now a “Moon Person.”

That type of sentiment was shared by Pink, who accepted the Michael Jackson Video Vanguard Award.

The singer performed a mix of some of her biggest hits, along with her new single “What About Us.”

She closed her performance with a diverse group of backup dancers and held their raised hands in triumph.

During her acceptance speech, Pink told the story of her six-year-old daughter feeling unattractive because she believed she looked like a boy. The singer said she used it as a teachable moment to discuss androgynous artists who have found success, including herself.

“Baby girl we don’t change, we take the gravel in the shell and we make a pearl,” Pink said. “And we help other people to change so that they can see more kinds of beauty. To all the artists here, I am so inspired by all of you. Thank you for being your true selves.”

The speech was one of the highlights of the night based on social media reaction, as was Jared Leto’s tribute to Linkin Park singer Chester Bennington.

Bennington committed suicide in July on what would have been the birthday of his good friend, rocker Chris Cornell, who took his own life two months prior.

Singer Logic offered another emotional moment when Alessia Cara, Khalid and several suicide attempt survivors joined him in a performance of the suicide prevention track “1-800-273-8255,” which brought tears to the eyes of many in attendance.

The “Roar” singer was soundly roasted for her skits and jokes, some of which fell flat.

Here’s a list of some of the night’s winners:

Ed Sheeran – “Shape of You”

Shawn Mendes – “There’s Nothing Holding Me Back”

Video of the Year

Alessia Cara – “Scars To Your Beautiful”

Artist of the Year

Best Fight Against the System

The Hamilton Mixtape – “Immigrants (We Get the Job Done)” – WINNER 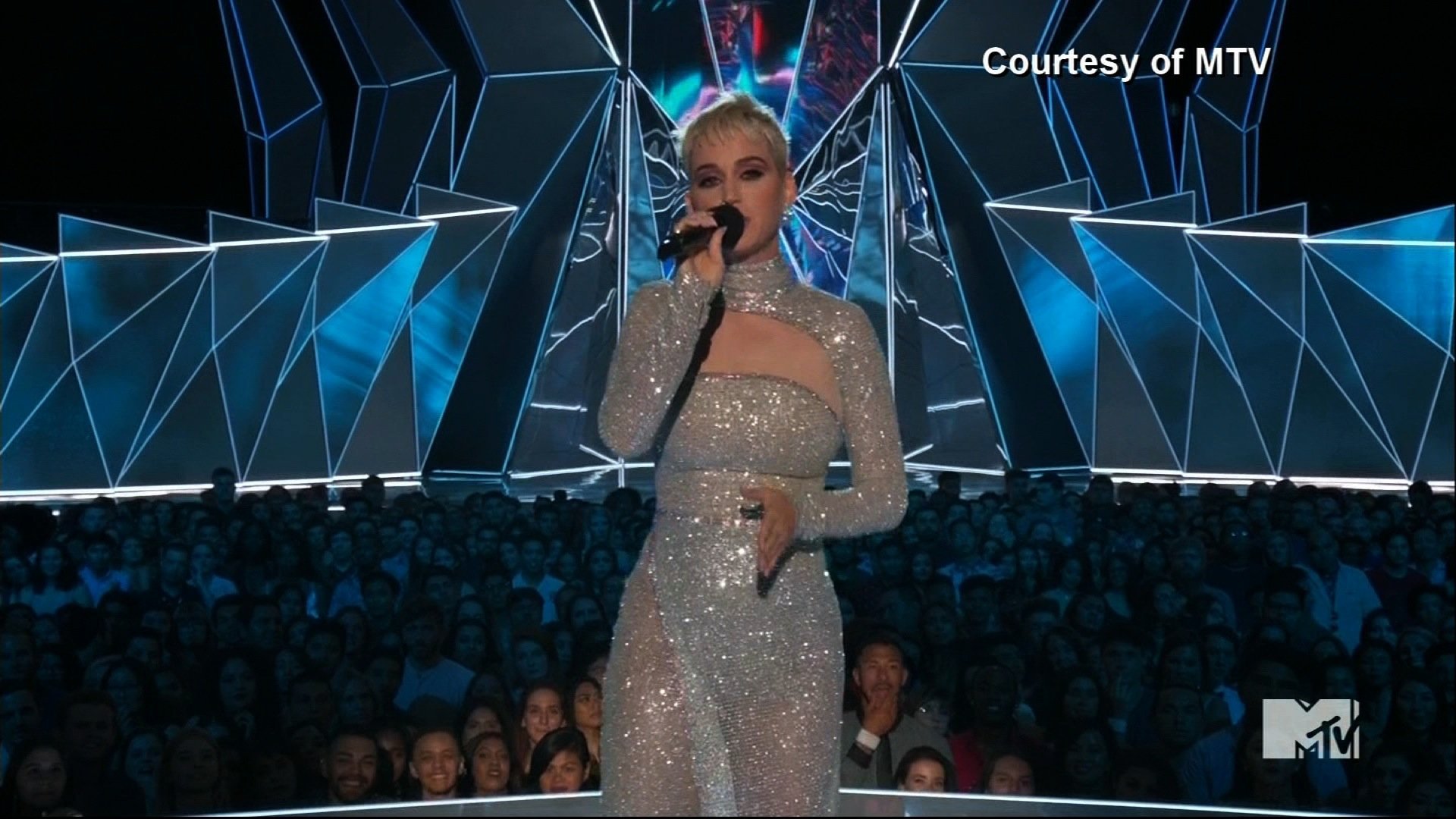