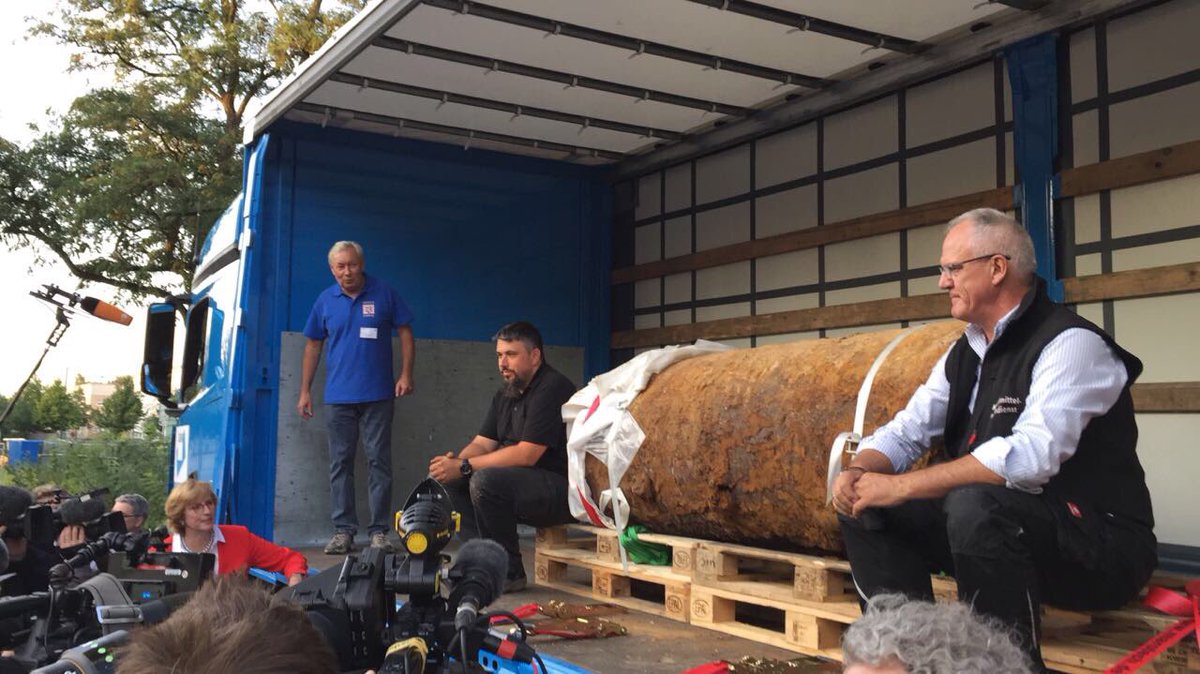 Frankfurt authorities defused a massive World War II bomb on Sunday, days after it was discovered buried at a construction site.

Frankfurt police said in a tweet Sunday afternoon that the delicate process had been completed successfully.

Central Frankfurt looked like a ghost town after nearly 60,000 people were evacuated, forced to leave their homes ahead of the operation in the German city. The bomb was found during work Tuesday close to the Goethe University Frankfurt compound on Wismarer Street, police said in a statement.

The device was a British bomb, specifically a 1.4-ton HC 4000 air mine, the statement said, and was put under police guard ahead of Sunday’s operation to make it safe.

Police said the size of the bomb made extensive evacuation measures a necessary precaution. Residents were told to leave their homes by 8 a.m. local time (2 a.m. ET) before the operation to defuse the bomb began.

The process — which took about four hours to complete — began around 2:30 pm local time after police removed additional Frankfurt residents who had yet to leave the evacuation zone.

Authorities began evacuating hospitals and care homes Saturday, as well as the German federal reserve and a major local broadcaster.

“The situation is relaxed which is a good sign and everything so far is going according to plan. We will now assess if everybody has left voluntarily and go from house to house and remove people if necessary. People who need assistance are being transported over the next few hours,” Röck said.

The fire brigade tweeted: “Transport for those who can’t leave on their own is on its way into the evacuation zone.” It said 1,100 relief workers and fire fighters had been deployed for the operation.

The brigade’s director, Reinhard Ries, told reporters: “The scale of this bomb is overwhelming. I have never seen anything like it.”

Police had the authority to forcibly remove residents from their homes. The fire brigade said in a statement that streets would be patrolled with the assistance of helicopters to ensure that no-one had been left behind and that homes were secure.

About 11.30 a.m. local time police tweeted that the evacuation zone had been divided into 15 sectors, 12 of which had been emptied.

Shelters were set up for residents who were unable to go to friends or family during the bomb operation, with food provided.

The two main shelters — at a convention center and a concert hall — could house up to 10,000 people, Röck told CNN.

The city also offered many activities to evacuees, with all public museums open and free of charge.

“Not everyone has the opportunity to spend the day with friends or relatives. By offering free entry to all city museums we want to help those affected to spend a few hours without worrying”, Frankfurt’s Mayor Peter Feldmann said in a statement.

Frankfurt airport tweeted that airport tours would be free to all Frankfurters forced to leave their homes, while residents organized other distractions such as yoga in the park.

Those who evacuated on foot or by bicycle were allowed to head back to their homes, authorities said. But residents who drove couldn’t return until patients who were evacuated from two area hospitals had made it back.

The Frankfurt fire brigade said residents are expected to be able to return to their homes from 6 p.m. local time.

Legacy of the war

World War II may have ended over 70 years ago, but its legacy still lingers in cities across Germany.

In May, more than 50,000 people were asked to leave Hanover after a bomb was discovered during pre-construction work on a site in the Vahrenwald district.

On Christmas Day 2016, another 50,000 were evacuated from Augsburg in south Germany after a 1.8-ton bomb was found beneath an underground parking garage.