“The entire housing stock was damaged,” Browne said after visiting the island of 1,800. “It is just a total devastation.”

Irma killed at least three people, destroyed government buildings, tore roofs from houses and left islands without power or communications. St. Martin/St. Maarten and St. Barts also felt the fury of the Category 5 storm, one of the strongest ever recorded in the Atlantic, according to updates from the region.

Browne said there currently is no water or phone service for Barbuda residents. He said one fatality, an infant, had been confirmed.

Communication was disrupted after winds snapped a cell tower in two on the island.

Irma damaged Barbuda’s lone airport, which will now force officials to ferry supplies by boat and helicopter from Antigua. Browne estimated rebuilding would cost about $100 million.

“I have never seen any such destruction on a per capita basis compared to what I saw in Barbuda this afternoon,” Browne told CNN’s Anderson Cooper.

‘My family has nowhere to go’

Charles Fernandez, minister of foreign affairs and international trade for Antigua and Barbuda, said that destruction on Barbuda was “upwards of 90%.”

One woman told ABS TV/Radio her family of seven, including a 2-month-old infant, crammed into a closet before the hurricane force winds. The storm ripped the roof off, and they huddled together until rescuers reached them. Her home is destroyed, the woman said.

“My main concern now is, how we’re going to survive after this,” the Barbuda resident said.

One man, whose home was also destroyed, echoed the woman’s concerns.

“My family has nowhere to go,” he told ABS/TV Radio.

Another Barbuda resident it felt like “the whole house was ripping apart.” The woman called 911 and authorities told the family to get in the closet or the bathroom.

“I start praying and I ask God to just come and help me get out of this house because the house was like tearing apart,” she told ABS TV/Radio Antigua. “It was like sucking us up, because we were holding on the bathroom door.”

‘The palm trees are bent over’

“In terms of material damage, the four strongest buildings on the island of St. Martin have been destroyed,” which meant that weaker structures likely had been damaged or destroyed, French Interior Minister Gérard Collomb told reporters.

Xaverius van der Hoek, who lives on St. Maarten, said his home — which has a concrete roof and hurricane shutters — was spared, but many other homes suffered damage.

“There is a sense of dread … utility poles are down everywhere. There is no power and no public water and it appears it may take a long time to restore,” he told CNN. “From my balcony alone, I count at least 24 homes and apartment building with either partial or entire roofs missing.”

Van der Hoek said he get power from a generator. But he only has fuel to last about a week.

The firehouse in St. Barts was under a meter of water and is out of service, according to an update posted to Twitter by the government of the neighboring French territory, Guadeloupe.

“Firefighters have taken shelter in an upstairs room. A number of houses have suffered damage, roofs have been ripped out. Total loss of electricity,” it said.

The mayor’s office in St. Martin has been damaged, the update from Guadeloupe said, and the mayor and 23 others took shelter in a concrete-walled room.

The island has been without electricity since 6 a.m. local time, it said.

Virginia Barreras told CNN she was riding out the storm in a hotel in St. Martin.

“The palm trees are bent over and (I) can’t see anything but white,” she said before Irma’s core passed over the island. “The walls shake when the wind blows hard, and we can hear debris being thrown around.”

Footage posted to YouTube by PTZtv.com from Maho Beach, St. Maarten, showed winds so powerful they reportedly took out the webcam filming the scene. St. Maarten is the Dutch part of the island.

Irma’s core, with maximum sustained winds of 185 mph — well above the 157 mph threshold of a Category 5 — slammed Barbuda before hitting St. Martin and Anguilla.

Keithley Meade, director of the Antigua and Barbuda Meteorological Services, said, “Barbuda was heavily damaged by Irma. So badly damaged that there is no communication, so we don’t know how much.”

After slamming St. Martin, Anguilla and St. Kitts and Nevis, the storm was expected to move near the British Virgin Islands and northern US Virgin Islands.

The storm’s center was then expected to pass near or just north of Puerto Rico on Wednesday afternoon and evening.

Forecasters warn that Irma’s likely path will be near the Turks and Caicos Islands on Thursday. The storm is expected to pass just north of the Dominican Republic and Haiti, bringing hurricane force winds to northern sections of the island, likely causing mudslides and flooding. 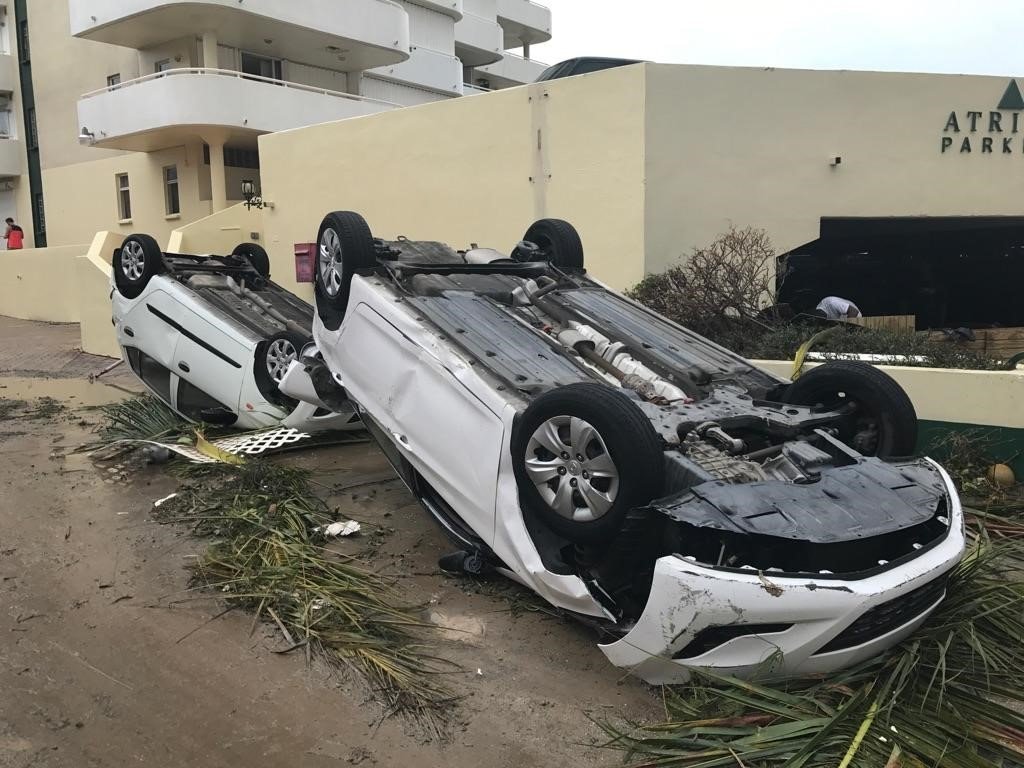