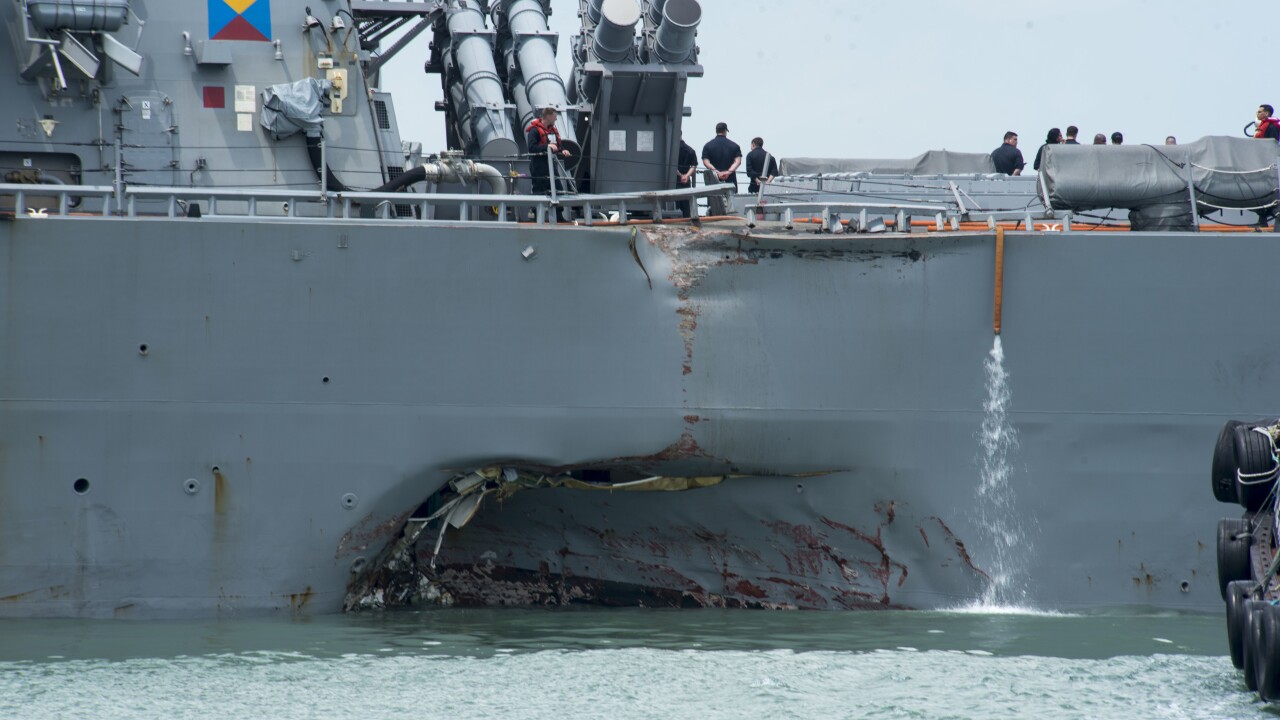 170821-N-OU129-022 CHANGI NAVAL BASE, REPUBLIC OF SINGAPORE – Damage to the portside is visible as the Guided-missile destroyer USS John S. McCain (DDG 56) steers towards Changi Naval Base, Republic of Singapore, following a collision with the merchant vessel Alnic MC while underway east of the Straits of Malacca and Singapore on Aug. 21. Significant damage to the hull resulted in flooding to nearby compartments, including crew berthing, machinery, and communications rooms. Damage control efforts by the crew halted further flooding. The incident will be investigated. (U.S. Navy photo by Mass Communication Specialist 2nd Class Joshua Fulton/Released)

Senior Navy officials told a congressional panel Thursday they are examining everything from a lack of training to taxingly long deployments to congressional budget headaches in order to get to the bottom of a spate of deadly ship collisions in the Pacific.

Vice Chief of Naval Operations Adm. Bill Moran and Navy director of surface warfare Rear Adm. Ronald Boxall testified on Thursday before two House armed services subcommittees on the USS John S. McCain and USS Fitzgerald collisions, which claimed the lives of 17 sailors and led to the dismissal of the 7th Fleet commander.

170821-N-OU129-022
CHANGI NAVAL BASE, REPUBLIC OF SINGAPORE – Damage to the portside is visible as the Guided-missile destroyer USS John S. McCain (DDG 56) steers towards Changi Naval Base, Republic of Singapore, following a collision with the merchant vessel Alnic MC while underway east of the Straits of Malacca and Singapore on Aug. 21.  (U.S. Navy photo by Mass Communication Specialist 2nd Class Joshua Fulton/Released)

“We are shocked by these recent events,” Moran said. “No matter how tough our operating environment, or how strained our budget, we shouldn’t be and cannot be colliding with other ships and running aground. That is not about resourcing; it is about safety and it is about leadership at sea.”

The two destroyer collisions, along with two cruiser accidents in the Pacific earlier this year, have prompted major questions inside the Navy about the health of its fleet.

Moran testified that the collisions themselves are under investigation with several reviews — investigating the collisions as well as the Navy’s deployment schedules and other factors — but he acknowledged the Navy has dealt with growing demands and a shrinking fleet.

“We continue to have a supply and demand problem which is placing a heavy strain on the force,” he said.

“All of these things culminate with this notion we aren’t big enough to do everything we’re being tasked to do,” Moran added. “And our culture is, ‘we’re going to get it done,’ because that’s what the Navy is all about. And sometimes our culture works against us.”

The Navy vice chief also acknowledged that he incorrectly assumed that the forces which deployed the most would also be the best trained.

Chief of Naval Operations Adm. John Richardson sent a memo to his team on Wednesday that said he was postponing the Navy’s 3-4 star symposium planned for this month.

“Instead of coming to Washington DC, look for places where these tearing down forces may have eroded your standard,” Richardson wrote in the memo, which was obtained by CNN.

“Each of us should have some ‘red lines’ — a point beyond which we cannot go and still be safe and effective. If we can’t meet that standard, we don’t go until we can,” Richardson wrote.

A senior Navy official told CNN that Richardson may not have been aware of all the deficiencies at the time of the failed training certifications.

In addition to the Navy’s overall pace of operations, the hearing focused on ships that are based overseas. The Government Accountability Office has raised concerns for years about training and maintenance issues for overseas ships.

Ahead of Thursday’s hearing, GAO found that more than one-third of training certifications for the Navy’s cruisers and destroyers based in Japan had expired in June — a fivefold increase from 2015, according to GAO’s testimony to the committee, which CNN first reported.

Moran responded that when certifications expired, a ship’s commanding officer still had to get a waiver with a plan approved to lower risk. But he acknowledged the rate of waivers needed was “alarming.”

The expired training certifications were just one of several issues involving maintenance and training for ships based abroad outlined by GAO’s John Pendleton, who also testified Thursday.

He said the Navy had pledged to address the lack of dedicated training time for ships based overseas back in 2015, but the service has yet to do so.

Lawmakers delved into a number of potential issues surrounding the collisions, from lack of training to length of deployment and even the prospect that a cyber attack could have played a role, which Moran says has not materialized.

“The material condition and the operational readiness of the ships are significantly degraded and not acceptable,” said Rep. Rob Wittman of Virginia, chairman of the House armed services seapower subcommittee. “Of our large surface combatants, the majority of the forward-deployed ships are not properly ready to perform their primary warfare areas.”

Connecticut Rep. Joe Courtney, the top Democrat on the subpanel, asked whether there was also a leadership issue, and whether anyone was willing to say “no” when a ship wasn’t ready.

Congress’ role was also a frequent topic of discussion, with the Navy officials and lawmakers themselves blaming Congress for failing to deliver timely budgets that hampered planning for ship maintenance and modernization.

“Back in February, I cited funding reductions and consistent uncertainty about Congressional budget approvals as especially damaging, as they prevent us from taking steps to mitigate the burden on ships and sailors imposed by the high operational demand,” Moran said.

He got agreement from House armed services chairman Mac Thornberry, who has long complained about defense budgets being subject to lengthy continuing resolutions and the Budget Control Act.

Thornberry told Moran not to hesitate to continue to call out the budget problems Congress is highlighting, but he also faulted Pentagon leaders during the Obama administration.

“The leadership of the department in the last administration denied we had a readiness problem. They said we were just making it up,” Thornberry said.

Thursday’s hearing is likely the first in a series on the issue. Sen. Roger Wicker, the chairman of the Senate’s seapower subcommittee, told CNN he’s likely to hold a hearing after the Navy completes its investigation into the collisions.