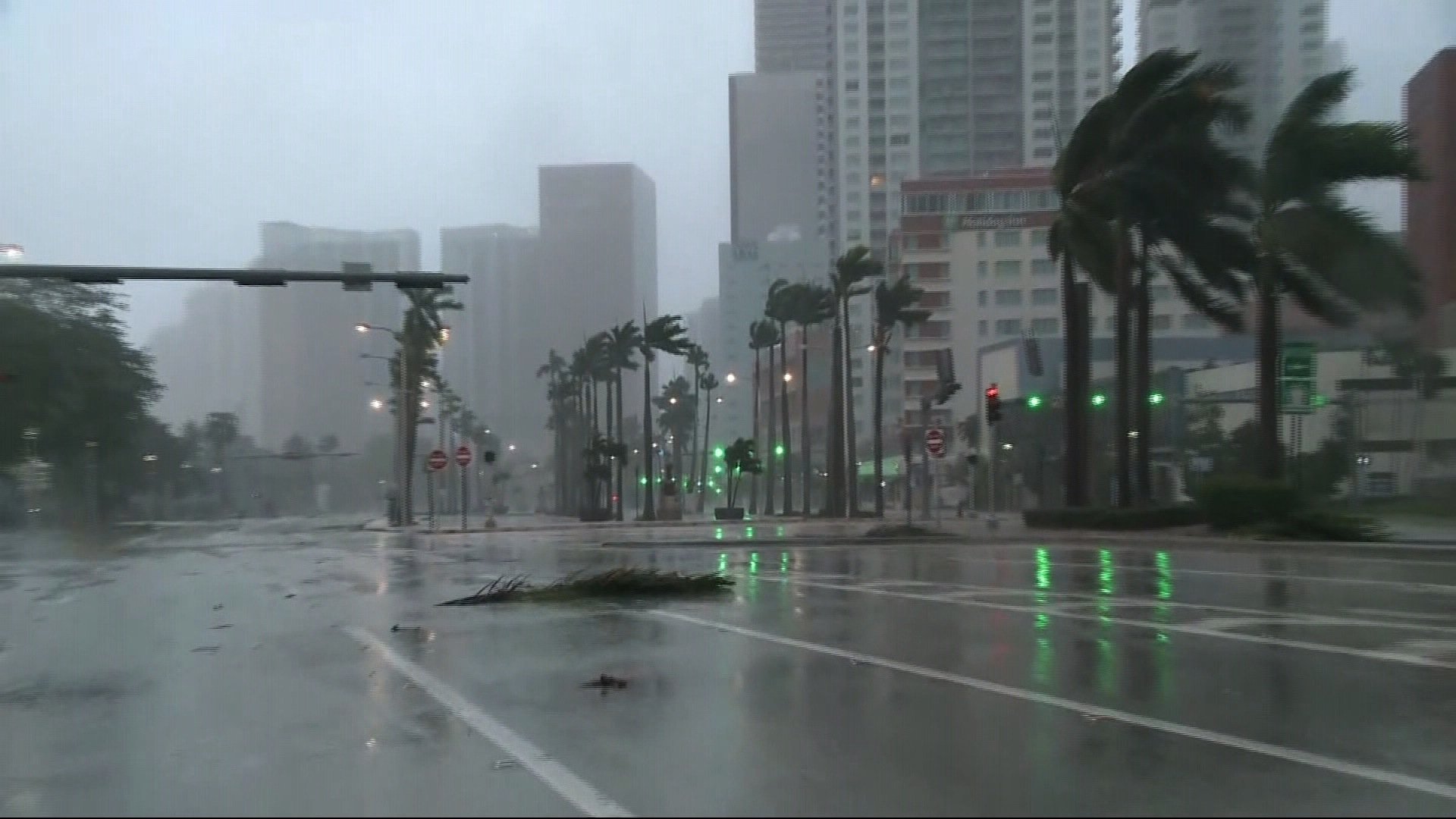 (CNN) — Editor’s note: This is a developing story that is being constantly updated as the storm progresses. Also, follow our live updates here or watch unlimited CNN.

Powerful winds from Hurricane Irma whipped through southwest Florida on Sunday, downing power lines and leaving a trail of debris behind.

Forecasters warned people in the hurricane’s path to prepare for “dangerous storm surges” and flash flooding.

Irma is already uprooting trees and turning streets into rivers.

And there’s plenty more to come as the storm climbs the coast toward Tampa.

“We’re all hanging in there, ready to get out there to help others as soon as it’s safe to do so,” Marco Island Police Chief Al Schettino said as the storm hit his city on Sunday afternoon.

The storm’s impact was widespread. Even areas that didn’t face a direct hit from Irma saw flooding and downed power lines. In Riviera Beach, on Florida’s east coast, winds partially ripped roofs off two apartment buildings, forcing rescuers to evacuate about 50 people from the complex, the city’s mayor said.

Expected to be even more dangerous than the powerful winds are the storm surges that threaten Florida’s coastal cities.

“The threat of catastrophic storm surge flooding is highest along the southwest coast of Florida, where 10 to 15 feet of inundation above ground level is expected,” the hurricane center said. “This is a life-threatening situation.”

Mass evacuations jammed highways heading north and created a severe gas shortage in parts of Florida days before Irma hit. But as the storm neared, some Floridians hunkered down rather than hitting the road.

“We didn’t know if we’d have an opportunity to even get gas,” Naples resident Gina Fischer said.

So instead, Fischer boarded up the windows of her north Naples home, scrawling a message for the impending storm: “Irma, go away!” Then she headed inland to a friend’s house.

“We’re going to go to an interior hallway to be safe. We’ll wait until the noise is gone and until it’s quiet enough for us to come out and it be OK,” she told CNN on Sunday.

— Strong winds blowing from the northeast have pushed water out of shallow parts of bays and harbors in cities like Tampa and Port Charlotte, where the storm is expected to hit later Sunday night. “As soon as the wind shifts direction, the water will come back quickly and continue to move inland,” CNN meteorologist Judson Jones said.

— Police in North Miami Beach, Florida, said they’d used an armored personnel carrier to rescue a mother and her 4-month-old child from their flooded home.

— Two tornadoes touched down in Brevard County, Florida, destroying mobile homes in their path, officials said. No injuries have been reported.

— More than 3 million electric customers are without power across Florida, according to utility companies.

— A storm surge warning wraps around the state, from Brevard County to Tampa Bay.

— At least 26 deaths have been blamed on Irma in the Caribbean islands, where it hit before barreling toward Florida.

Gusts topping 90 mph whipped Miami on Sunday, knocking out power to more than 750,000 customers in the Miami-Dade area.

Flying objects such as coconuts turned into dangerous projectiles. And at least two construction cranes partially collapsed. One swung vigorously over downtown Miami. Another dangled over the city’s Edgewater neighborhood.

Matthew Spuler captured video of waves crashing over a seawall toward his downtown high-rise building.

“There is no seawall whatsoever,” Spuler said. “It’s amazing. It’s under water.”

Antonio Wilson stayed in his 16th-floor condo in Miami, watching the waters rise below.

“Everything is flooded,” he said. “I’m literally stuck.”

‘You can’t survive these storm surges’

“You can’t survive these storm surges,” he said.

And almost the entire state of Florida is under a hurricane warning, affecting at least 36 million people.

Those who did not evacuate ahead of the storm are in danger, Federal Emergency Management Agency Administrator Brock Long said Saturday.

“You’re on your own until we can actually get in there and it’s safe,” he told CNN.

Other states may be affected

The National Weather Service in Atlanta issued a tropical storm watch for the area Monday and Tuesday. Schools in the state planned to close Monday.

Irma hit Cuba’s Ciego de Avila province late Friday as a Category 5 hurricane before it weakened and headed to the United States.

This is the first year on record that the continental United States has had two Category 4 hurricane landfalls in the same year.