US Navy ships in deadly collisions had dismal training records 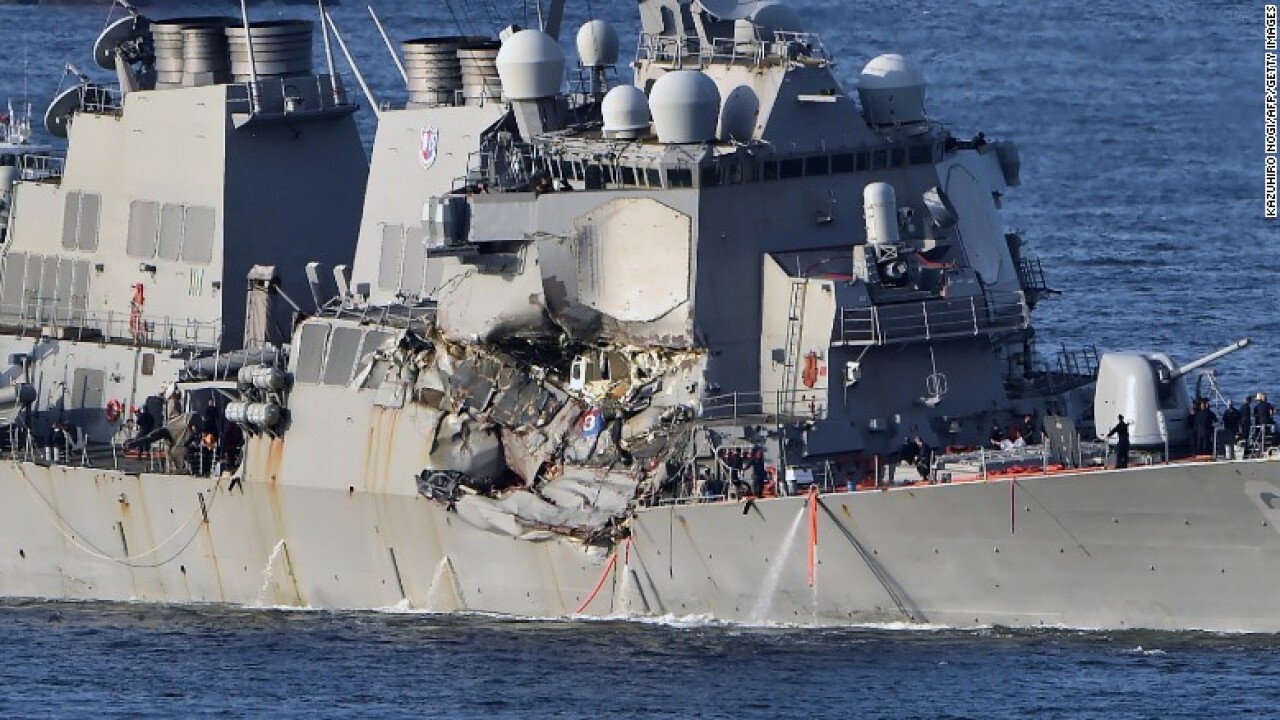 The two US Navy destroyers involved in deadly collisions in the Pacific this summer both had lengthy records of failure to fulfill key training requirements, according to Government Accountability Office data provided to Congress and obtained by CNN.

The USS Fitzgerald had expired training certification for 10 out of 10 key warfare mission areas in June, and the USS John S. McCain had let its certifications lapse in six out of the 10 mission areas, the data show.

The dismal training record for the two ships sheds new light on one factor that may have contributed to the two collisions with commercial ships in June and August, which killed 17 sailors.

170821-N-OU129-022
CHANGI NAVAL BASE, REPUBLIC OF SINGAPORE – Damage to the portside is visible as the Guided-missile destroyer USS John S. McCain (DDG 56) steers towards Changi Naval Base, Republic of Singapore, following a collision with the merchant vessel Alnic MC while underway east of the Straits of Malacca and Singapore on Aug. 21. (U.S. Navy photo by Mass Communication Specialist 2nd Class Joshua Fulton/Released)

The training records of the McCain and Fitzgerald were worse than the average warship in the Pacific, but they weren’t the only ones with training problems. GAO testimony released last week revealed that expired training certifications for the Navy’s 11 cruisers and destroyers based in Japan had skyrocketed five-fold from 7% in January 2015 to 37% in June. Two-thirds of the certifications had been expired for at least five months.

The deadly destroyer accidents — along with two Navy cruiser collisions Pacific earlier this year — prompted the dismissal of the Navy’s 7th Fleet commander Vice Adm. Joseph Aucoin, as well as multiple reviews of the way the Navy trains, maintains and deploys its fleet that’s stretched thin.

Senior Navy officials told lawmakers that the service is committed to getting to the root of the issues that have contributed to the spate of collisions.

“We ask the sailors to do an awful lot … and perhaps we’ve asked them to do too much,” Vice Chief of Naval Operations Adm. William Moran told the House armed services committee at a hearing last week on the collisions. “That’s what the comprehensive review will look at.”

Moran told lawmakers he had made a “wrong assumption” that forced forward-deployed naval forces in Japan were the most proficient and well-trained because they were operating all the time.

The USS Fitzgerald had let its training certifications expire for all of them, according to the GAO data.

The Navy’s preliminary findings in its Fitzgerald investigation found the crew failed to understand and acknowledge the cargo ship was approaching and failed to take any action necessary to avoid the collision.

The ship’s commanding officer, executive officer and senior non-commissioned officer were relieved of their duties following the collision.

The USS McCain’s training record was better than the USS Fitzgerald, but the ship was still overdue on a majority of its training certifications.

A source familiar with the training data told CNN that other ships in the Pacific have similar poor training records.

John Pendleton, the GAO’s director of defense force structure and readiness issues, testified last week that eight of the 11 destroyers and cruisers in the Pacific, or 73%, had expired training certifications for seamanship and undersea warfare, and 64% had cruise missile and surface warfare certifications that had expired.

The ships’ basic certifications were better, Pendleton said, but he noted that seamanship stood out as a problem area.

Moran said that when a ship’s certifications expire, the vessel’s commanding officer is required to put a plan in place to mitigate risk that must be approved up the chain of command. He also said there have been problems getting officials from the Pacific’s Afloat Training Group, which certifies the ships, to conduct certifications due to staffing issues.

“We have allowed our standards of the numbers of certifications … to drop as the number of certification waivers have grown,” Moran said. “While not against the rules, they are below the standard that we should accept.”

Rep. Joe Courtney, a Connecticut Democrat, said he was concerned about who was approving the waivers and who ultimately decided that a ship with expired training was fit to deploy.

“The certification process which covers key competencies in seamanship, surface warfare, ballistic missile defense to, name just a few, needs to be reviewed and approved by an accountable decision-maker,” he said.

The training issues have been particularly acute for ships based in Japan.

The Navy has moved toward a model of basing ships abroad so they can deploy more quickly and frequently, but that method has come at the cost of training and maintenance, the GAO has warned

The GAO found in past reports that ships based overseas had less time for training and maintenance time compared to ships that call US ports home, and Pendleton testified that ships in Japan had no dedicated training periods at all.

“Their aggressive deployment schedule gave the Navy more presence, it’s true. But it came at a cost, including detrimental effects on ship readiness,” Pendleton said. “In fact, we were told that the overseas based ships were so busy that they had to train on the margins. Term I’d not heard before. And it was explained to me that meant that they had to squeeze training in when they could.”