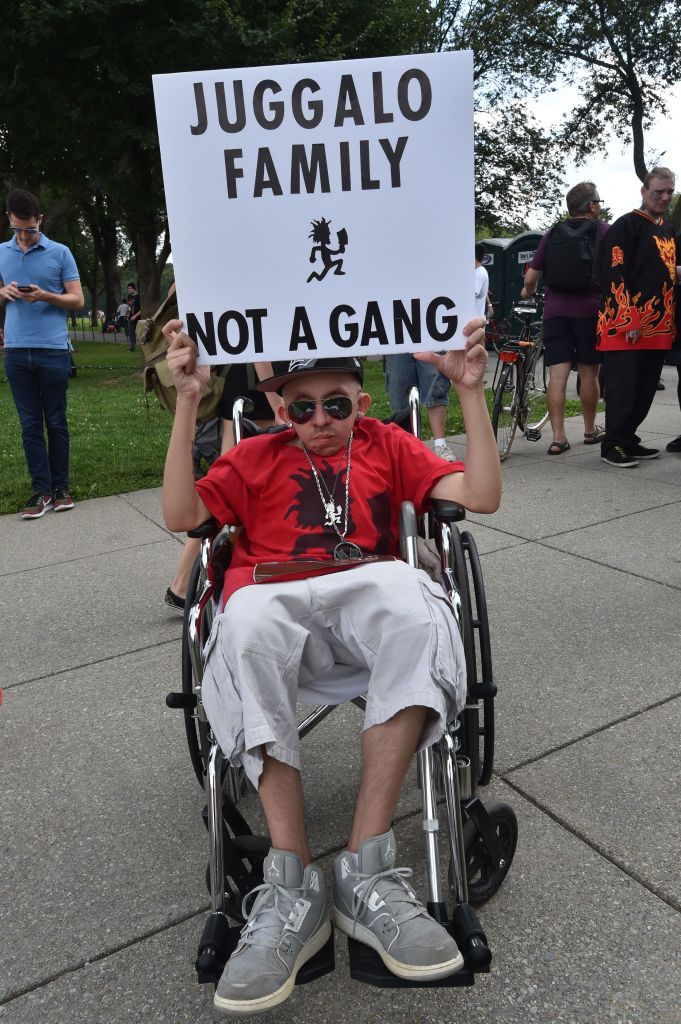 Fans of the band Insane Clown Posse, known as Juggalos, marched Saturday on the National Mall to protest the FBI identifying them as a gang.

Juggalos deny the label, which the FBI gave them in its 2011 National Gang Threat Assessment. The report called the group a “loosely organized hybrid gang,” saying that “most crimes committed by Juggalos are sporadic, disorganized, individualistic, and often involve simple assault, personal drug use and possession, petty theft and vandalism.”

In 2014, the band and four fans sued the FBI. “Juggalos are a ‘family’ of people who love and help one another, enjoy one another’s company, and bond over the music and a philosophy of life,” the lawsuit stated. “Organized crime is by no means part of the Juggalo culture.”

The Juggalo march organizers said the FBI’s classification “has resulted in hundreds if not thousands of people subjected to various forms of discrimination, harassment, and profiling,” according to their website, which includes testimonials of Juggalos who say they’ve been profiled at work, school and by law enforcement for being fans of the band or having Insane Clown Posse merchandise or tattoos.

The march will coincide with several other events, including a rally by supporters of President Donald Trump dubbed the “Mother of All Rallies,” which aims to “demand protection for traditional American culture while they express their love for the United States and the America First agenda,” according to the group’s website.

An anti-Trump protest is also expected in the afternoon, organized by a Facebook group called “White Supremacists out of Washington.” And the 37th Annual Race to Beat Cancer, a five-kilometer race that raises money for cancer research, also will take place.

The Metropolitan Police Department is closing several roads around the National Mall because of the events.

The Juggalo march began Saturday afternoon in front of the Lincoln Memorial and will last nine hours. It’s scheduled to include testimonials from Juggalos, guest speakers and performances by the Insane Clown Posse and artists on their Psychopathic Records label.

The hip-hop group formed in Detroit and released their first album Carnival of Carnage in 1992. They have sold nearly 8 million albums as of 2012, according to Nielsen SoundScan. Fans meet annually for the Gathering of the Juggalos. Their 2017 event was held in Oklahoma City.